Despite Some Ambivalence, the Expanded Jamaica Carnival of 2017 Was a Hit 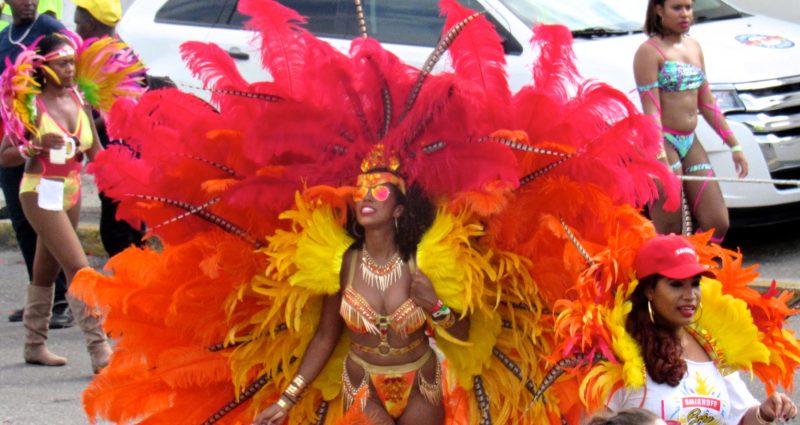 A masquerader at Jamaica's 2017 Carnival. Photo by Emma Lewis, used with permission.

Jamaica has a love/hate relationship with its Carnival. A cultural import founded in 1989 by Jamaican musician Byron Lee, it provokes mixed feelings among many Jamaicans. This year, after more than a day of torrential rains and flooding in many parts of the island, the weather miraculously held up on the day. Participation was greater than in recent years, since Lee's family, who this year were back to carry on the tradition after his death in 2008, offered more affordable costumes to supplement the upscale Bacchanal Jamaica, via two new bands, Xaymaca and Xodus.

Even with Kingston's designation as a creative city of music by UNESCO, dancehall still doesn't hold pride of place here. How is dancehall being accommodated, let alone promoted, in City Kingston? Dancehall continually is made to feel like an inconvenience in its own home. Sure, it isn't everybody's cup of tea, but the oppressive shroud under which it must always happen in back alleys, hiding from police after hours, shouldn't still be. There still exists the struggle with the Noise Abatement Act forcing early closure, which is completely against dancehall culture.

It's time to put a stop to this loud, rude, crass annual home invasion of a foreign culture. There is NO upside at all

Dancehall is 365 every year.
Soca can't have its little 40 days?
Jeeezum!
All when a soca time dancehall still a play.
Why the rift!?

Businessman Zachary Harding was among those pointing out the economic benefits of Carnival, including highlighting Kingston as a tourist destination:

Unstoppable. 25,000+ visitors through Kingston airport in April = 34% increase = UPSIDE! We also export our culture. It's a global world. https://t.co/IL2LfldQO7

And well-known broadcasters Archibald Gordon and Simon Crosskill made a point: Do Jamaicans actively support their “indigenous” music?

Nevertheless, the general consensus on social media was that 2017 was an excellent year. One tweet noted:

60% of Bacchanal Jamaica revellers were from overseas.

On a separate note, Xodus had 1,800 revellers on the road. pic.twitter.com/su85dFSnRQ

Carnival was spectacular. All that needs to happen is that they all end at the same time at the same place with a big dance in HWT square.

Many Jamaicans embraced Carnival wholeheartedly, and simply had fun. Several photos of the celebrations went viral. The Jamaica Gleaner tweeted:

#MasMania: Pillar point! This reveller takes it to another level on the Xaymaca carnival road march – @rmakyn photo pic.twitter.com/Tsx5DvG2HK

#MasMania: She can do it too! A senior citizens walks alongside two younger revellers on the Jamaica Carnival road march – Jermaine Barnaby pic.twitter.com/KuLYTHhqE5

Of course, politicians also took the opportunity to gain some visibility. Minister of Culture, Gender, Entertainment and Sport Olivia “Babsy” Grange and Kingston Mayor Delroy Williams were on the scene, tweeting: