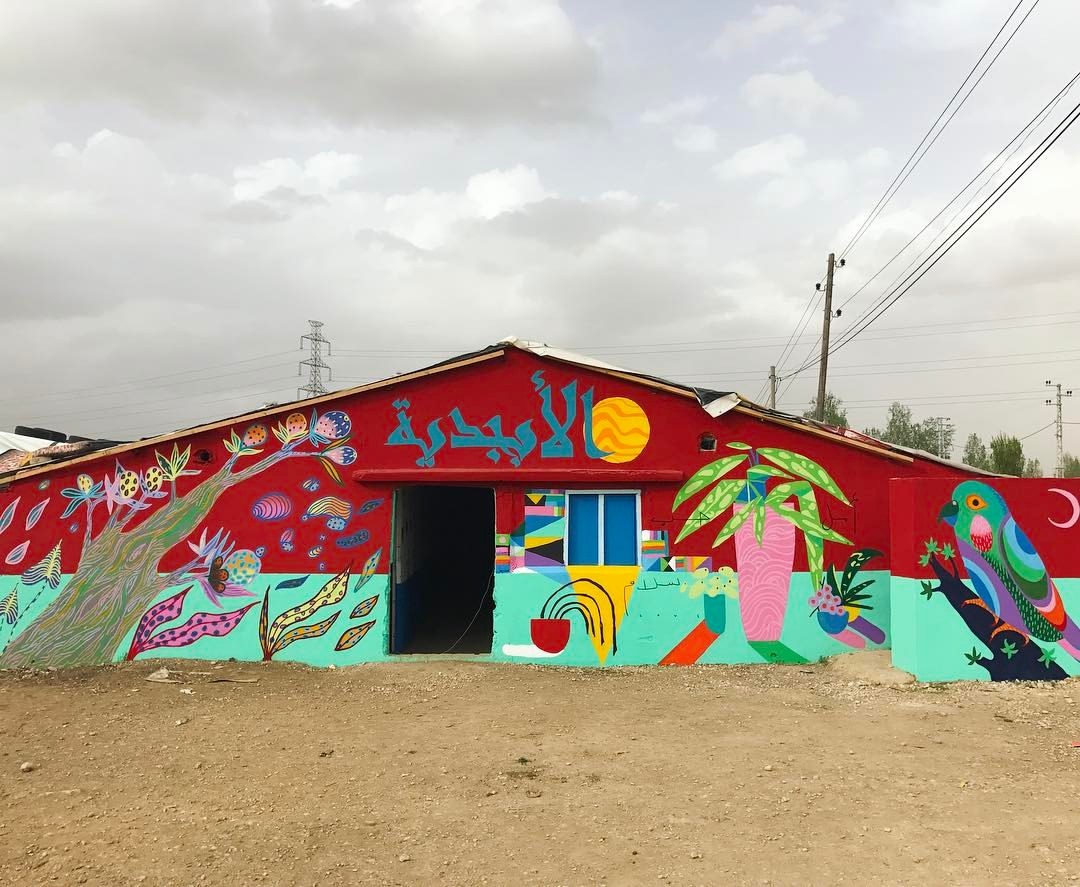 A painted school at a Syrian refugee camp in the Beqaa Valley, Lebanon. Photo from the Rimon Guimarães Facebook page.

The Syrian refugee camp in Lebanon's Beqaa Valley, home to almost 1 million refugees, now has a splash of color thanks to a project which saw Syrian children aided by a Brazilian graffiti artist duo called Cosmic Boys decorate a school with technicolor art.

The effort called “Painting On Camps Walls” was part of a larger initiative called Cosmic Future that wants to use art as a thereputical tool with Syrian young people. Involved are Conexus Project, a nomadic art collective; Al Caravan, which puts on educational, entertainment and cultural workshops for displaced Syrian children and adults; Costmic Boys, formed by Rimon Guimarães and Zéh Palito; curator Sheila Zago; and French documentarist Agathe Champsaur.

They launched a campaign fundraising their work and are sharing updates on Facebook and Youtube, on their work's progress.

Their motivations are addressed below:

In a moment of strong flux of immigration due international conflicts, people look for chances to survive, places to live – to wait or to start a brand new life. Many end living in non ideal conditions between refugee camps and settlements, where education is not easily accessed and children and teenagers often quit studying.

We believe that art can bring them some relief, perspective and skills to make their waiting less painful – as well as to give them a voice to express what they are experiencing, along with international visibility. Therefore, we aim to engage with children and teenager refugees living in these spaces, trying to turn their low life expectations into hope for a bright Cosmic Future! 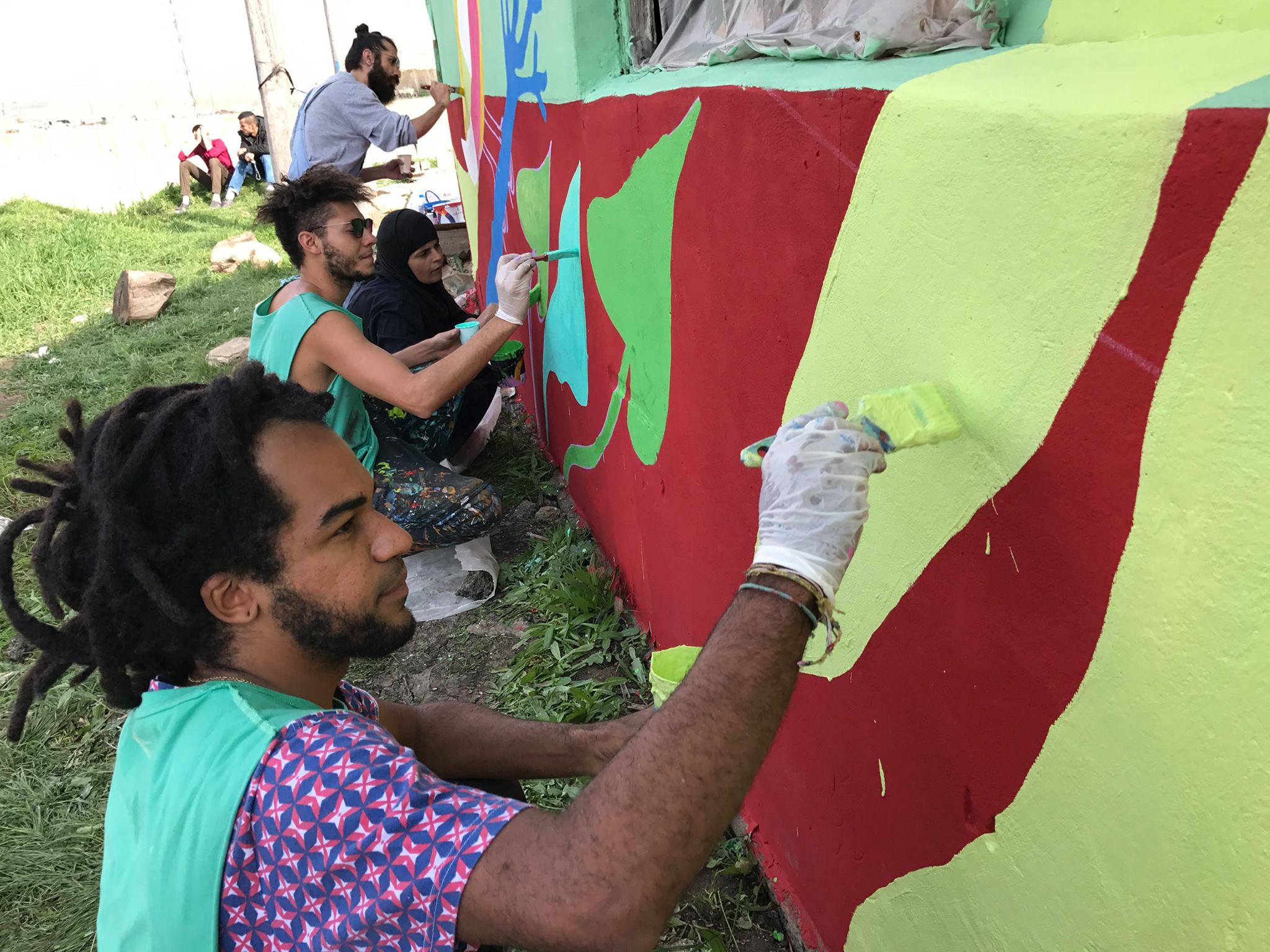 Al Caravan has been bringing art as well as other educational endeavors to displaced Syrians since 2013. The idea for the organization came to light a year earlier when the Syrian regime's air force dropped bombs over Idlib province, in northwestern Syria, during the daytime, forcing residents to escape, leaving their homes temporarily behind.

We were two friends, myself and Kasem Hammad, who sensed the potential of a mobile location to restore the people goods while they are away from homes, ideally caravans which were quite distributed in that area for agriculture mini-projects. They ask one manufacturer to fabricate a special “Magic Caravan” for the kids activities. Our joint was broken when my friend killed in a Syrian forces raid, but I insisted to continue the project.

In January 2013, Al Caravan dedicated itself to roam the remote areas for displaced families’ children basic learning, education, and entertainment activities. It's not a replacement for the school, but a kind of reinforcement of the civil society. The team grown to 15 activists serving around 1,500 boys and girls in three Syrian provinces countrysides, Idlib, Aleppo and Latakia. Nowadays, Al Caravan is acting in several areas in Syria and some refugees camps in Turkey, Lebanon and even Germany.

Despite having limited funding, Al Caravan gathered a team of around 100 volunteers in and out of Syria combined with activists from the educational field to offer their experience and work to Syrian children and use social media to communicate with the outside world.

The project's goals are to create a generation that enjoy the arts as an essential part of children's personality building away from violence as well as psychological support.

The work of around 3,000 children participating in these paintings were exhibited in Paris and Montreal, with plans to train 25 boys and girls to present a show about UN children rights with sol vocal and folkloric songs.

In a recent post on Facebook, Zeh declared their visit to Damascus, Syria to paint more walls of hope:

Fourth day in Syria: In the middle of the war we began to paint our mural in the center of the capital of the country. A very important day in my life for the importance that this mural carries and for all the situation that this country faces. The spark that started the war in the country in 2011 was a graffiti made by teenagers. Nowadays, 2017, we are here painting a mural with goal of spreading love and hope through art.

If we can fulfill our mission to paint this mural without any problem, this mural will be the largest painting mural in the country. Something that encourages us a lot and gives us the energy to continue painting in the midst of all the risks we run and all the difficulty we face to be here. Small detail: we arrived the country by armored car and we are painting with armed men around.

Syrians in general are very receptive, very friendly people, always treating us in the best way possible. In the streets many armed soldiers, magazines of cars and people in all avenues and several strategic points of the city. Sound of bombs, planes, shots during the day that intensify at night. I think we can now “abstract” the noises of the war that takes place six kilometers from where we are. Tension is everywhere but the joy too. Something difficult to explain.
The old town is magnificent and full of stories, the market, the architecture, the food all very unique. The people are beautiful and loving despite all the regrets.

Today the Secretary of Culture of the country made a beautiful public speech saying that we carry “guns” … our brushes bringing hope. 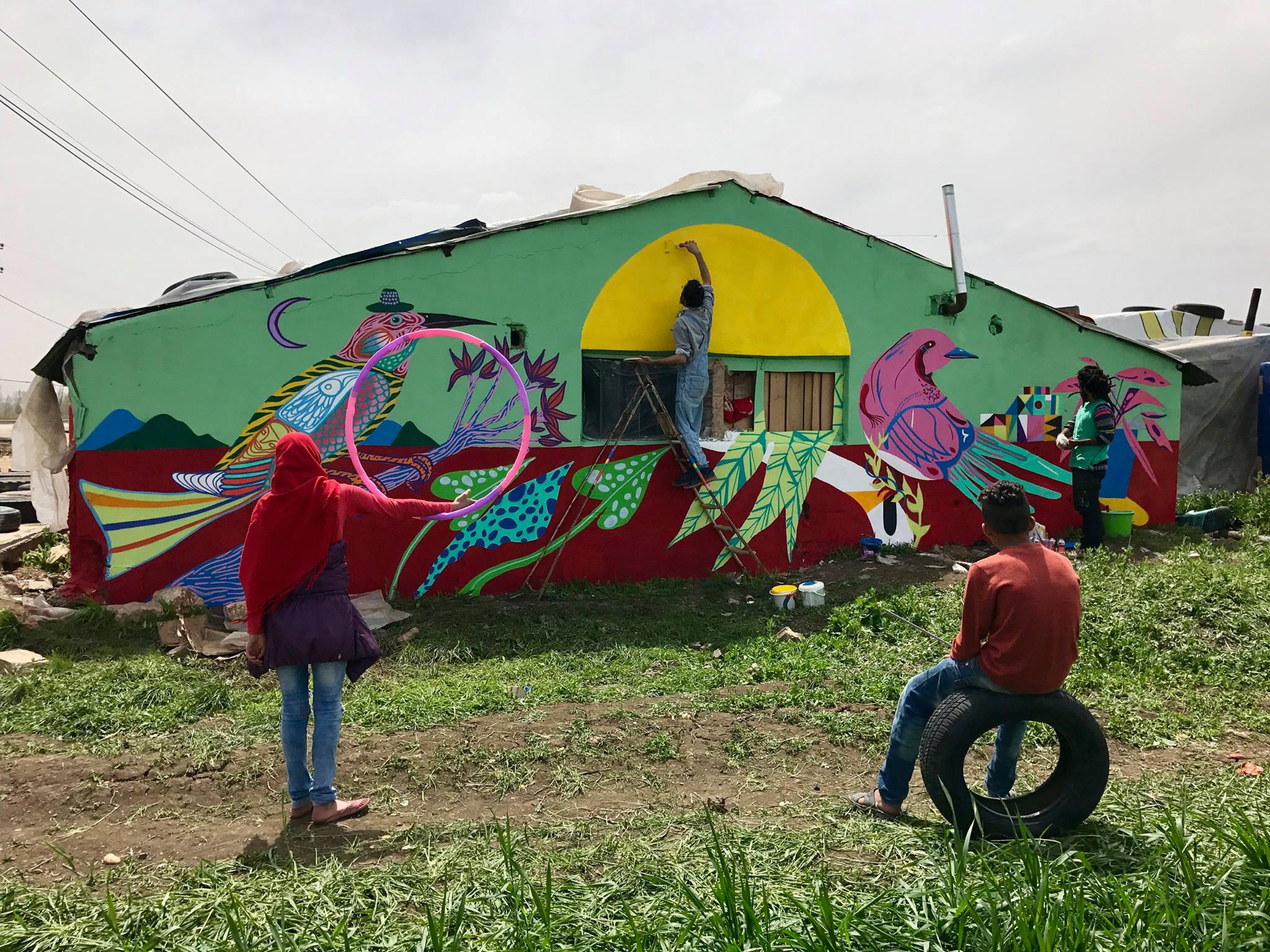 A painted school in the Beqaa Valley. From the Conexus Project Facebook Page