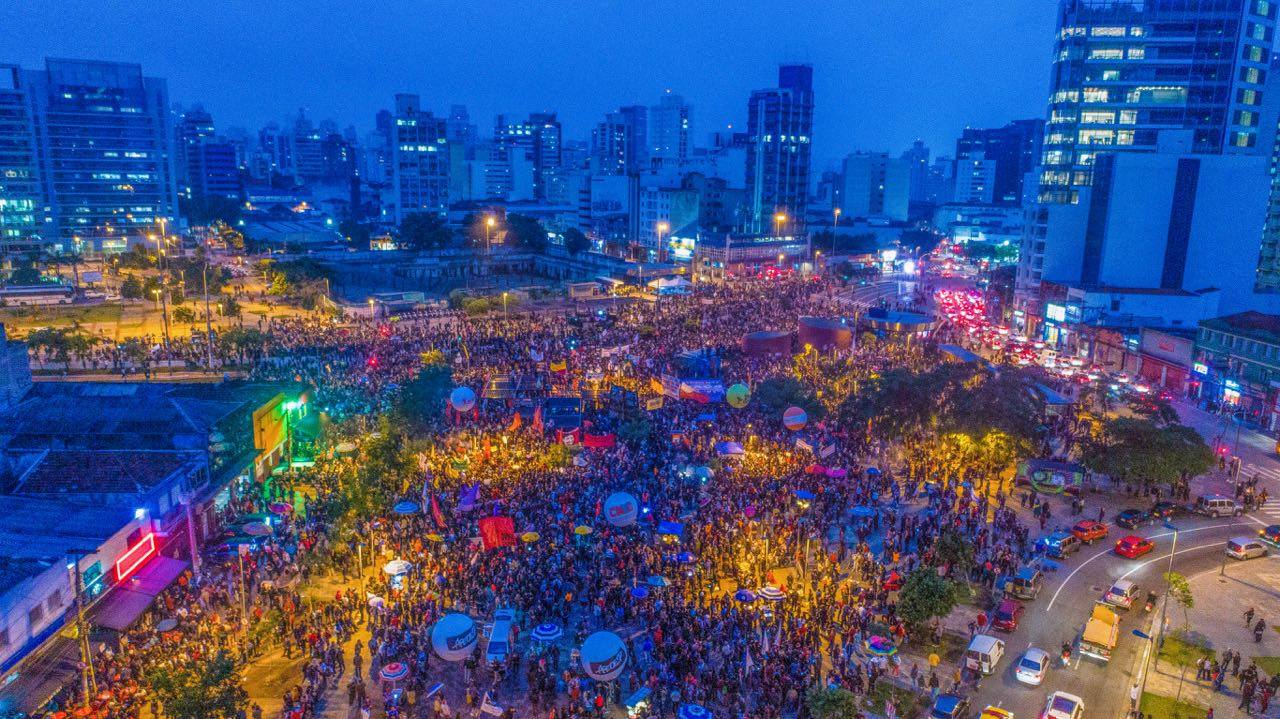 Millions of workers are striking in Brazil against reforms set to weaken labour and pension laws pushed by the conservative government of Michel Temer, who replaced Dilma Rousseff as Brazil's president a year ago after a controversial impeachment process.

Public transportation has been partially shut down in most state capitals [2], including the country's largest, São Paulo. Bankers, oil industry workers, teachers and civil servants are among the main laborers that stopped working for 24 hours, starting midnight, Friday, April 28. They are led by social movement activists and trade union organizers, who are also staging public demonstrations.

Unlike the protests that have repeatedly occurred in Brazil over the past three years, these demonstrations are also taking place in smaller towns and the big cities’ poorer suburbs. Protesters have blocked some of the country's major interstate roads, bridges, airports and bus terminals since the early hours of the morning. Many people have reported [3] that the day feels like a Sunday or a holiday.

The last time Brazil witnessed a general strike of comparable proportions was in 1996 when Brazil was governed by another [4] pro-austerity president. On Twitter, the hashtags #GreveGeral #BrasilEmGreve trended all day on Friday. 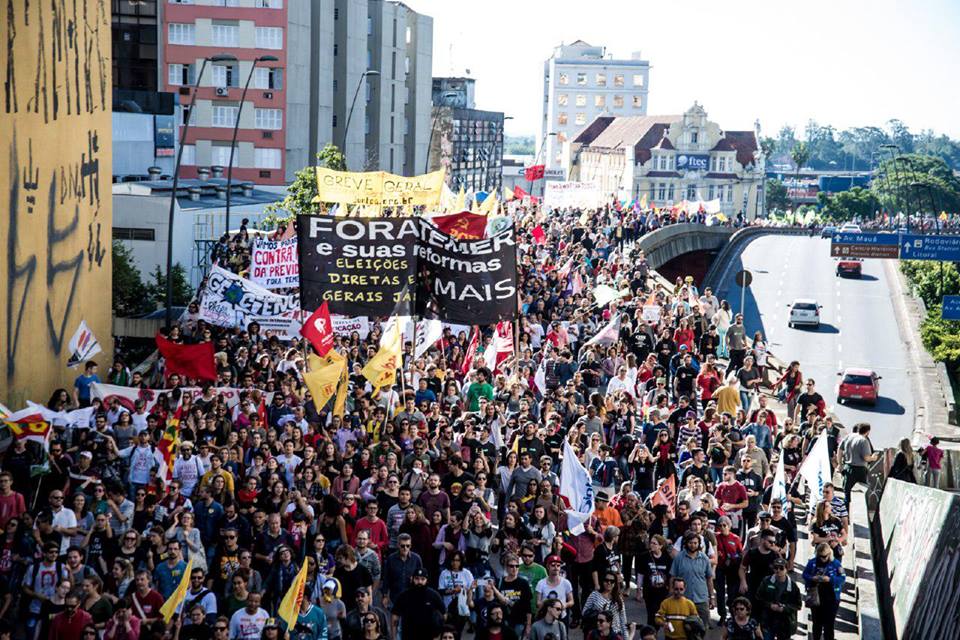 Last week, Brazil's Chamber of Deputies approved [5] labour reforms that would increase the workweek from 44 to 48 hours, water-down penalties for companies that fire employees, and make it more difficult for workers to sue their former employers.

The bill is part of a series of reforms hastily pushed by Temer, who enjoys a substantial legislative majority, as well as support from Brazil's business sector, despite his own sinking political popularity. A poll by Ipsos released [6] last week puts his approval rating at a measly 4 percent. Other bills passed into law in the past year include a freeze [7] on increases in public spending and legislation that lifts restrictions on outsourcing. In the coming weeks, the Congress is also expected to vote on major pension reforms.

The government says the reforms are necessary to counter Brazil's massive public deficit [8] and were first announced in late 2015 by the centrist political party PMDB in a document titled “Bridge to the Future [9].” The plan was released shortly before the party ended its 12-year-old alliance with the Worker's Party — a crucial break that allowed Congress to impeach Dilma Rousseff easily in April 2016. Rousseff was elected with 54 percent of the votes in October 2014 with a very different platform, raising questions about the legitimacy of the government's new reforms.

An ever-unfolding corruption scandal, with new pleas in the past weeks implicating major party leaders and Temer himself, has also increased public discontent and puts the country in a state of uncertainty until the 2018 general elections. Temer himself will likely be prohibited [10] from running in the elections, as he was convicted of violating electoral laws in 2014, leading critics to point [11] out that he is now virtually unaccountable to future voters, as he pushes largely unpopular state policies. 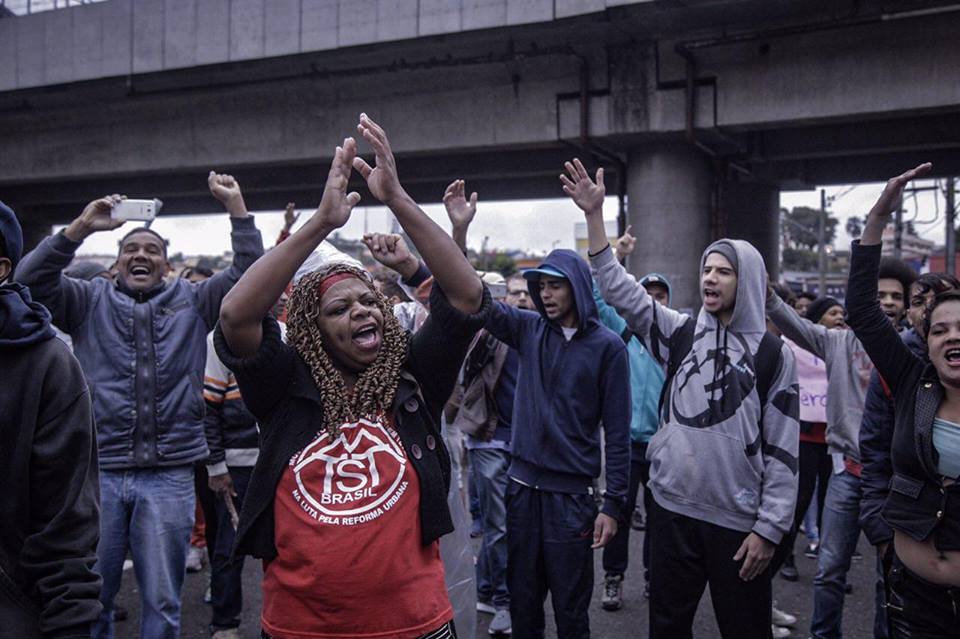 A demonstration in São Paulo South Zone in the early hours of the morning. Photo: Mídia Ninja CC BY-SA 2.0

Many are not in favour of the general strike today. Conservative groups like Movimento Brasil Livre and Vem pra Rua, which were at the forefront of the pro-impeachment protests in 2015 and 2016 and support the austerity reforms, say the protests are merely a political platform for the Worker's Party. Both have started campaigns on social media calling on people to cross picket lines and go to work, while the Free Brazil Movement, which generally favors more aggressive rhetoric, has branded protestors “terrorists [12].” 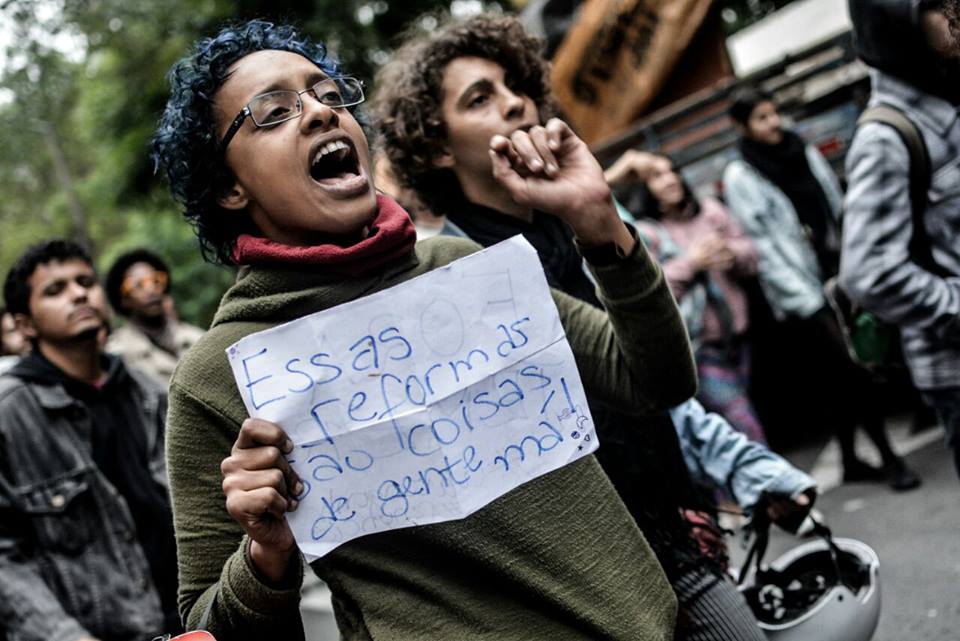 In Rio de Janeiro, police dispersed a large crowd of protesters in the early evening.

While most demonstrations so far have been scattered, the largest gathering is happened on Friday evening in downtown São Paulo and protesters marched towards Michel Temer's house nearby. 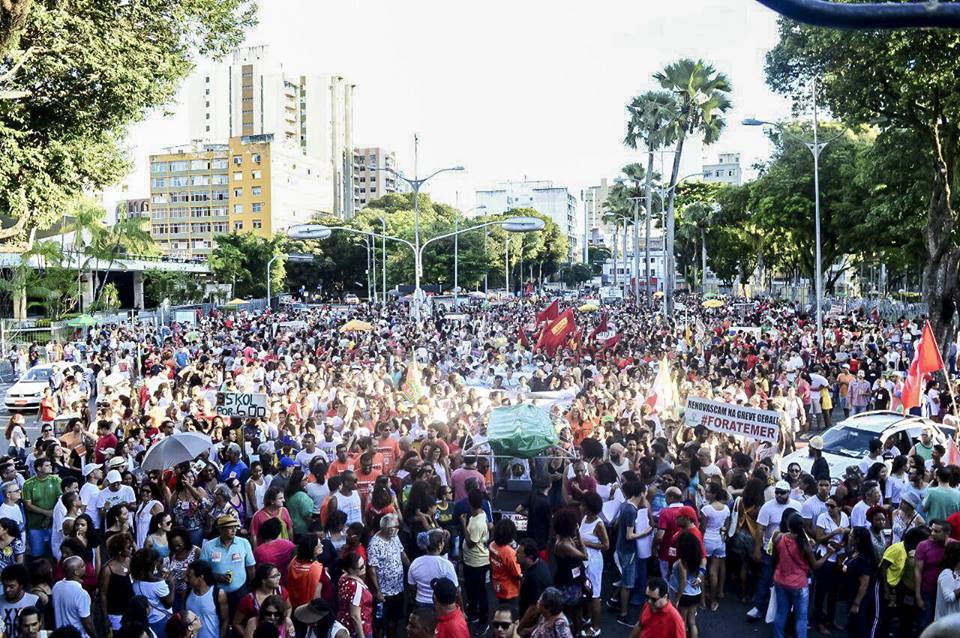 A protest in the city of Salvador. Photo Mídia Ninja CC BY-SA 2.0

Smaller demonstrations in support of Brazil's protesters also took place in some European capitals, including Berlin.

Brazilian diaspora demonstration in Berlin in support of the national strike #brasilemgreve [19] pic.twitter.com/6ATXjS6SJN [20]