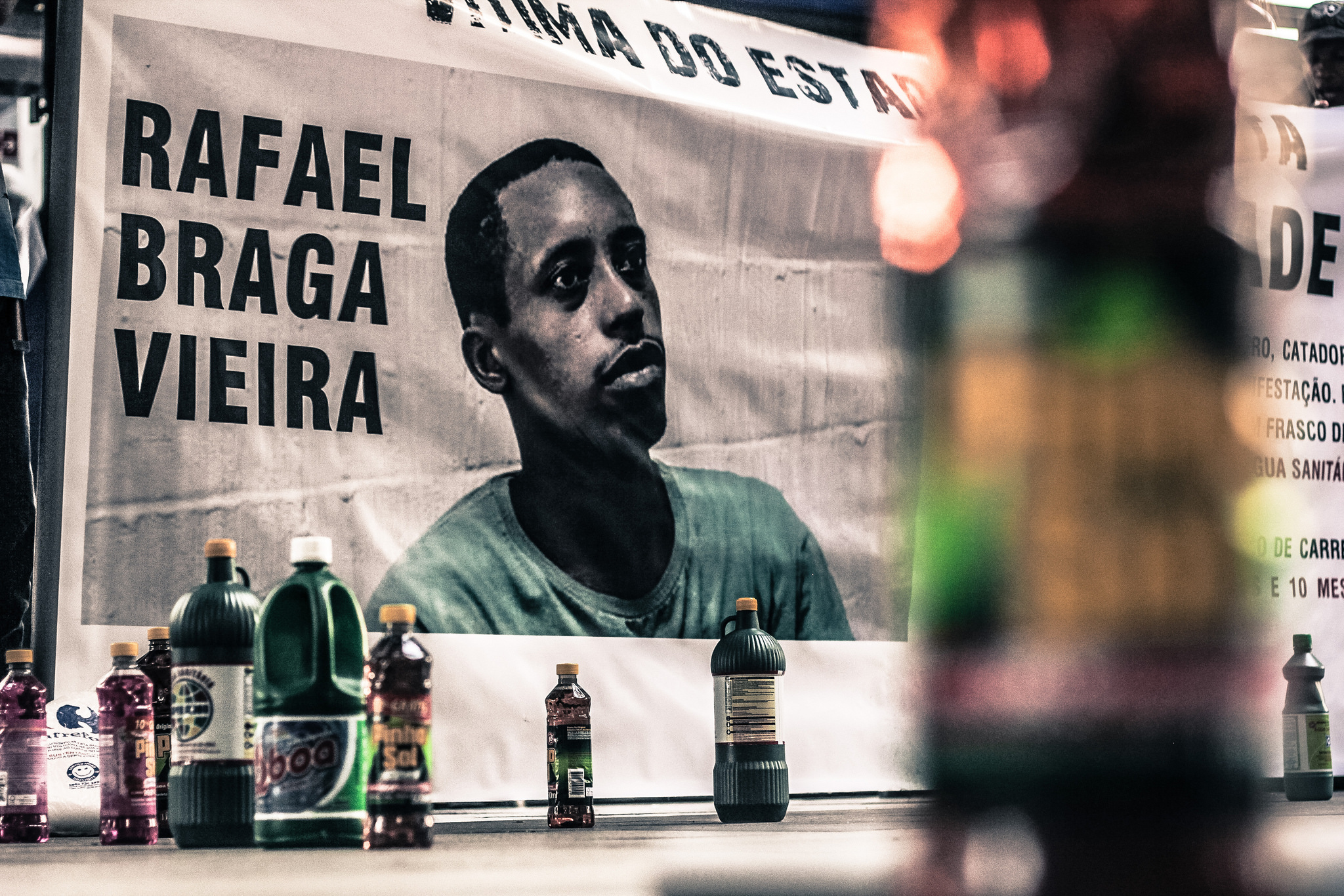 A banner at a demonstration in support of Rafael Braga Vieira in 2014. Photo: Mídia Ninja/Flickr, CC-BY-NC-SA 2.0

Rafael Braga Vieira was sentenced to five years in prison after police arrested [2] him at a large demonstration [3] in Rio de Janeiro on June 20, 2013. Just 25 years old at the time, Braga was homeless and collecting recyclables to survive. He says he was completely unaware that a mass protest was even taking place. When police found on his person bottles of disinfectant and bleach, they charged him with carrying explosives, and he was sentenced before the end of the year.

Braga was the only person sent to prison in connection with the June 2013 protests, but his case was just the beginning of a darker saga that activists and legal experts today say symbolizes [4] the institutionalized racism of Brazil's judicial system and the country's criminalization of poverty.

Braga remained in jail until December 2015, when a court allowed him to serve out the rest of his term at his mother's home in Rio, wearing an electronic anklet. A month later, however, police arrested him again for carrying 0.6 grams of marijuana and a firework (the kind used by drug traffickers to alert gangs when police enter the community).

On April 20, 2017, Braga was convicted [5] of drug trafficking, and this time a court sentenced him to 11 years and three months in prison, despite an intense campaign [6] (now in its third year) carried out by activists who have repeatedly pointed out the contradictions and irregularities in Braga's two trials.

The judge in his first trial in 2013 seems to have ignored a technical report by Rio de Janeiro state's bomb squad, which concluded [7] that the cleaning products Braga was carrying had “minimum explosive capacity,” partly because the bottles were made of plastic, while Molotov cocktails are normally made using glass bottles.

Braga denied the charges that lead to his second arrest in 2016, accusing officers of assaulting him and forging evidence — something not uncommon in Brazilian policing [8], where suspects are often beaten into denouncing drug traffickers.

In the second trial, the court threw out the one witness called in Braga's defense (a neighbor who corroborated his version of events) on the grounds that the neighbor had a “family relationship” with Braga. The prosecution's five witnesses were all police officers [9] with conflicting testimonies. For example, one officer said Braga was transported to the police station in the trunk of a patrol car, while another said he was placed in the backseat.

Remarkably, the judge also refused [10] to review video surveillance footage from cameras in the area where Braga was arrested, ruling that it was “unnecessary to the conclusion of the case.”

Many legal experts have also criticized the sentence, arguing that more than 11 years in prison is a wildly severe punishment for possessing a small amount of marijuana. Ponte Jornalismo, an independent media outlet that closely covered both trials, cited similar cases [5] that resulted in far weaker penalties — like when police arrested an 18-year-old man in 2007 for carrying 25 grams of marijuana. That suspect spent just a day in jail, before a judge dismissed the drug trafficking charges. According to the website G1 [11], the defendant later admitted that he got help from his well-connected father, who was friends with another judge.

Brazil's controversial laws on drugs allow the courts to treat defendants in enormously different ways. While drug use has been decriminalized, the law does not offer clear definitions of what differentiates “use” and “trafficking,” leaving the decision to police officers and judges on a case-by-case basis. Some legal experts argue that the vague language found in these laws actually reinforces racist prejudices in Brazil's justice system, where poorer people of color are far more likely to be convicted [12] of drug trafficking.

David Miranda, Rio de Janeiro's city councillor from the leftist party Socialism and Freedom, compared Braga's trial to another infamous case in Brazil from 2013, when police found 450 kilograms of cocaine paste on a helicopter owned by state deputy and businessman Gerais Gustavo Perrella (the son of senator Zezé Perella). Police arrested the helicopter pilot (an employee of the Perrella family) and charged him with drug trafficking, while prosecutors ignored the Perrellas.

Rafael Braga V. standing beside graffiti reading, “You only look from the left to the right, the state crushes you top-down” [This photo was widely shared on social media. It was taken on November 20, 2014, when Braga was in semi-open [17] regime, as he was returning to prison after a day's work. He was punished for the stunt with 10 days in solitary confinement].

Over the past week, many Internet users reacted angrily to Braga's new conviction, including lawyer and professor [18] Antônio Pedro Melchior:

In a country whose history of human rights violations by the police institution is immense, where the overwhelming majority of the population says they do not trust the police, condemnations based solely on the police officer's word cannot be admitted.

A script was fulfilled. The judge merely acted as expected.

He gave Rafael a verdict. And so did all of us. In summing up all the disgrace of such typical extreme Brazilian poverty in the condemnation of one more black man, the judge wrote to whom the laws in Brazil serve.

Several demonstrations [24] in support of Braga took place in Rio de Janeiro, São Paulo, and even in Uruguay [25]. On April 24, hundreds of people also joined a vigil [26] in São Paulo to protest the new prison sentence.

Demonstration in São Paulo for the release of Rafael Braga. Photo by Daniel Arroyo and Ponte Jornalismo, used with permission.

You can find photos from the demonstration in São Paulo at Ponte Jornalismo's website [27]and the Mães de Maio Facebook page [28]. Also, a couple of videos [29] of the demonstration were posted on Alma Preta's Facebook page [30]. On Facebook, the Pela Liberdade de Rafael Braga Vieira's (For the Freedom of Rafael Braga Vieira) posted a complete timeline [31] (in Portuguese) depicting Rafael's saga, beginning with his first arrest in 2013 and ending with his sentencing this month.