Some Hong Kongers Insist on Blaming the Woman, Not the Man, in Viral Fist Fight Over Going Dutch 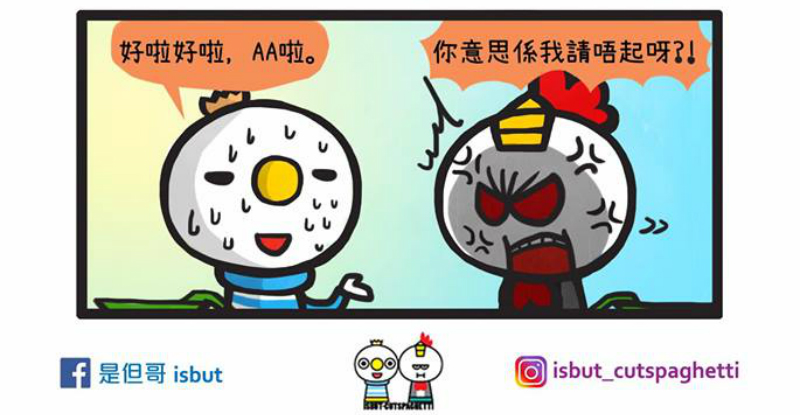 “Woman: Let’s go Dutch. Man: You think I can't afford the dinner?!” A panel from the comic “Is But Brother.” See the full comic below. Republished on Global Voices with permission.

A news story went viral in Hong Kong on April 24 about a man and woman who were were arrested by police officers for a fist fight in a restaurant over the dinner bill of HK$2,200, approximately US$300.

Online reports suggested that the fight was triggered by the woman’s refusal to “go Dutch” and share the bill. Many commenters were quick to accuse the woman of taking advantage of her gender and pressuring the man to pay the bill.

However, a few hours later, the restaurant owner clarified that the fight was triggered by the woman’s insistence on going Dutch. The man reportedly refused, tore up the money and got physical.

Though the truth turned out to be completely opposite of what had been imagined, some netizens still continued to present the scenario that blamed the woman for the fight.

Below are some typical reactions from the popular Golden Forum site after the news first circulated online:

Judging from her appearance, the woman is most likely the god-damned typical Hong Kong girl who thinks that guy should always pay the bill.
Most likely, the guy was prepared to pay but the Hong Kong girl ordered so much that a HK$300-per-person-budget meal turned into HK$1,100 per person. But the guy only had HK$700 in his pocket, how could he pay?

Another netizen put his assumption that the woman was at fault in “mathematical” terms:

Some even suggested that the woman was a “part-time girlfriend” (call girl) who seduced the man to get dinner out of him, and then refused to give him sexual favors in exchange.

Even after the restaurant owner clarified the story to reporters, many still insisted the woman was the source of trouble:

If the guy says he wants to pay the bill,
the woman should not suggest going Dutch
Because the suggestion is disrespectful of the man. The woman should suggest returning the favor, like paying for dessert or a movie ticket.

If the guy says he wants to pay the bill, and the chick refuses the arrangement, it implies that she doesn’t want to further the relationship. That’s obvious.

Artist Ar Chu illustrated all three possible scenarios in a comic to make the point that regardless of the woman’s decision in settling the bill, she would always be the one to be blamed because of the stereotypical image of Hong Kong women, or “Gong Nui,” as being narcissistic, arrogant, proud and shallow. The term has been widely used on online forums since 2005 to criticize and label negative behavior from women. 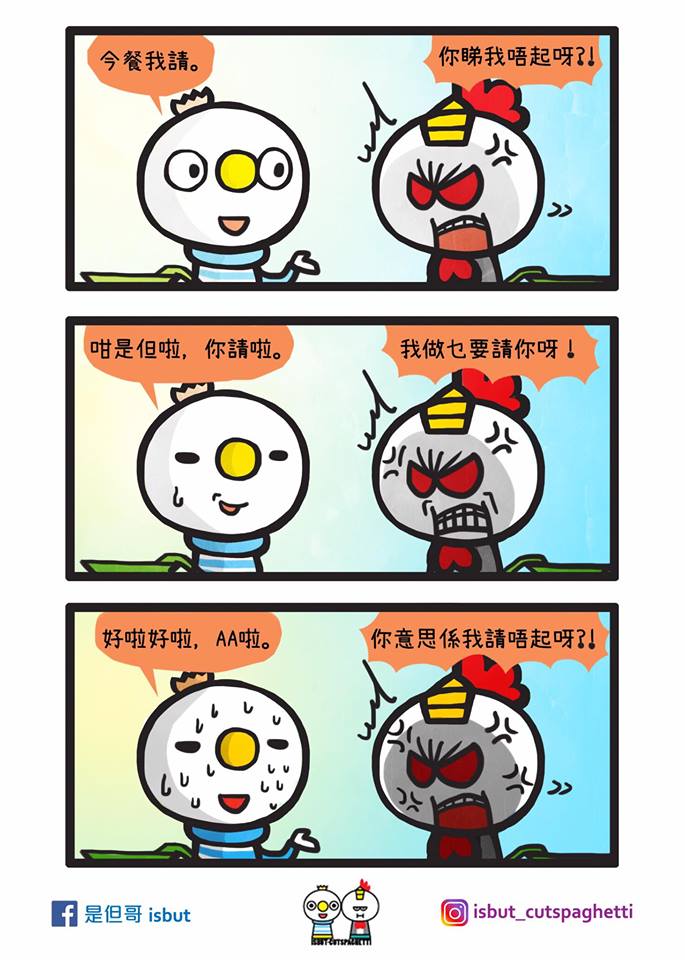 Comic from Facebook page “Is But Brother”. Republished on Global Voices with permission.