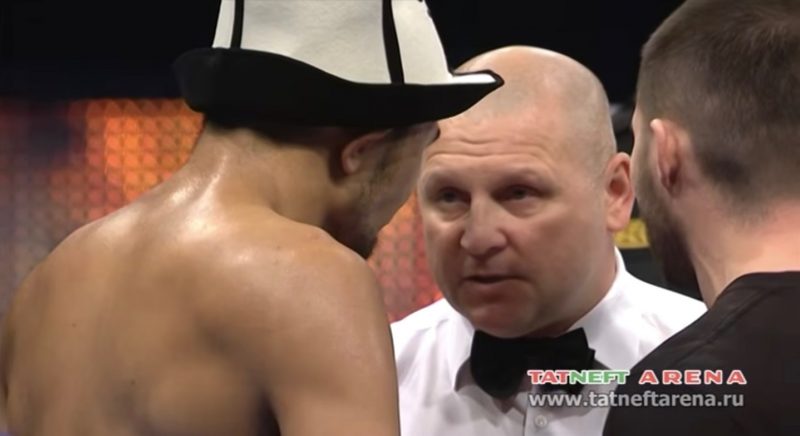 Sharsheyev, a Kyrgyz kickboxer, appeared to have his opponent Anton Kalinin on the back foot during an April 21 contest in the city of Kazan, which is the capital of the Russian federal republic of Tatarstan. He knocked him down several times and seemed to have emerged as the stronger of the pair during the second half of a toughly contested match. Nevertheless, the Russian judges gave the fight to Kalinin.

The story might have ended there, but it didn't. Sharsheyev refused to accept the decision and leave the ring, disrespecting both the judges and his opponent.

Over the course of heated exchanges with officials, the fight referee threatened Sharsheyev with deportation:

You'll just get deported and not let back into the country. Or even jailed. Where is your common sense?

But Sharsheyev remained in the ring, dramatically grabbing a microphone to address the crowd:

Good evening, dear Tatarstan! I'm here for the second time, the people here are very kind. I want to say what you all saw; I won. TNA [fighting] is a tournament in which everything should be fair, in which there should be fair judges, a fair chief judge. And was it really fair today? [The audience responds “No!”] So ask yourself: where is justice in this world? Where is it? Or does the colour of my skin make a difference? Thank you all for supporting me. Dastan is with you!

Sharsheyev's address won him broad support on Kyrgyz social networks. One post on the topic was shared over 1,300 times.

The fight came at a time when around a million Kyrgyzstani migrants in Russia are under even heavier scrutiny than usual following the bombing of the metro in St Petersburg, which killed 16 people and was attributed to a Kyrgyzstan-born holder of Russian citizenship Akborjon Akilov. The fact the fight took place in Tatarstan, a Russian republic where at least half of the population identifies as Muslim and speaks a language, which, like Kyrgyz, has Turkic roots, made the scandal even more resonant.

At the end of his explosive address in Russian, Sharsheyev, who sported a Kyrgyz kalpak hat, said “Alga Kyrgyzstan”, translating as “Forward Kyrgyzstan” in several Turkic languages including Kyrgyz and Tatar.

The debacle triggered comment wars between Russians and Kyrgyz on YouTube that featured the usual battery of ethnic slurs, although several Russian YouTubers rose above the fray and conceded Sharsheyev should have been awarded the fight.

The organisers of the tournament have said that they are considering excluding the Kyrgyz fighter from future tournaments in Russia.

No announcements, however, have been made so far about the future of the bout's referee, who openly assumed the powers of Russian migration and penitentiary officials in the out-of-line comments he made to Sharsheyev.