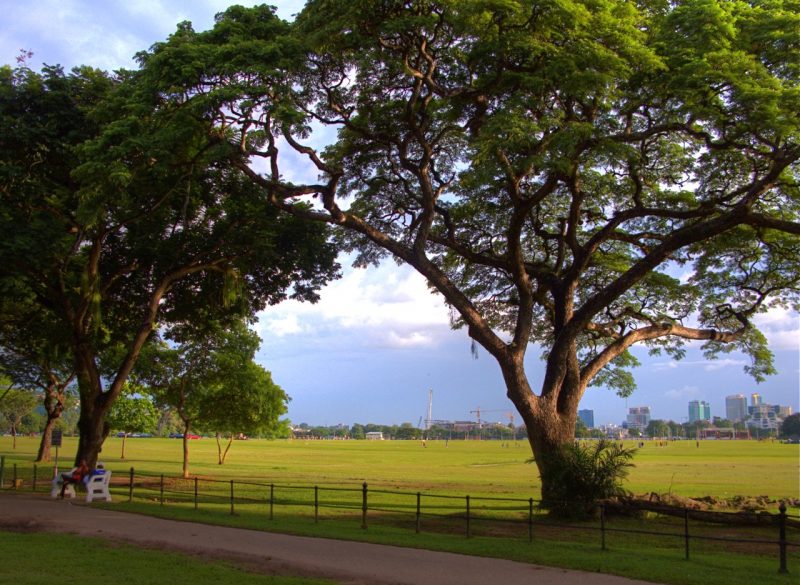 High Dynamic Range image of the northern side of the Queen's Park Savannah. Photo by Georgia Popplewell, CC BY-NC-ND 2.0.

The Queen's Park Savannah in Trinidad's capital, Port of Spain, is the city's biggest green space. Bordered by a running track, it is a popular destination for runners and other fitness enthusiasts. At Carnival time, the Savannah serves as the cultural centre for everything from the annual Panorama steel band competition to the Parade of the Bands. Adding to the local colour and charm of the Savannah are vendors, most of whom sell fresh coconut water and are a welcome sight for joggers who have just run a few laps (one complete Savannah is about 2.2 miles, or 3.5 kilometers).

Recently, a new vendor joined the group — artist Damian Agostini, a craftsman who works with wood (usually sourced from discarded trees). Much of his work is typical (stools, chairs, walking sticks) but he also constructs animals (horses, dogs, lions) that are quite whimsical. Agostini quickly became a regular fixture at the Savannah, so when, on April 20, 2017, the Port of Spain City Corporation seized and destroyed his sculptures because he had no legal right to display them there, social media rose up in his defence.

While most Internet users acknowledged that the artist was wrong for setting up shop without the proper permission, they also felt that the government's measures to remove him from the Savannah were too punitive. This evolved into a broader discussion of how the city could better accommodate artisans looking to ply their trade.

Between Twitter, Facebook, and a Change.org petition, the online outcry was soon so intense that the city's new mayor apologised for the way the incident was handled, and promised to organise compensation for the destruction of Agostini's art.

Damian Agostini's number is being passed on to the mayor and the corporation is seeking a permanent solution for him.

This need for a “permanent solution” is not a new discussion. Wired868 reposted an article by journalist Sunity Maharaj, which she had written more than a year ago. In it, she called the then showdown between the Port of Spain City Corporation and food vendors at the Queen’s Park Savannah “the latest episode in the epic contestation between power and people that keeps the economy tied to its colonial past”:

If we are to give real meaning to such borrowed concepts as SMEs and make productive use of the millions spent on encouraging the micro and small business sector, we must rise to the unexpected, often difficult challenges posed by the unplanned, spontaneous emergence of business.

At the Savannah, there was a business opportunity which the micro business sector spotted and seized upon, triggering a series of challenges for the city and other agencies of the state.

If we believe what we’ve been saying for years — that small business is the route to developing a sustainable economy — then this moment, right here, right now, presents one important opportunity.

Of course, there were social media users for whom the issue was much more clear cut — for example, Facebook user Taran Rampersad declared:

I now classify my vehicle as art, and if anyone tows it when I park illegally, I expect all of you to rise up. After all, it's how I make my livelihood. I promise to cry.

In contrast, the Facebook page The Penal Poet, which provides quick commentary on an array of topics, didn't quite know what to make of the whole public official versus public art scenario: 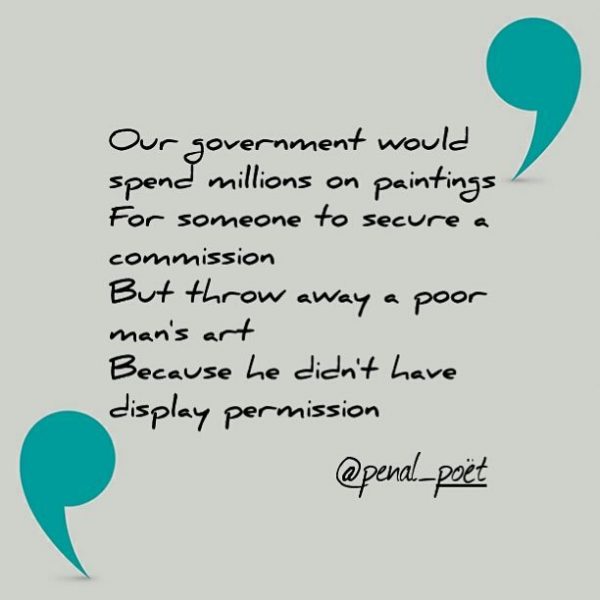 Two days after Agostini's art was seized, fellow artists gathered at the Queen's Park Savannah to promote the message that art is critical for the development of society, and that spaces must be created to facilitate this. Agostini was subsequently able to retrieve at least four of the 15 pieces that were seized and there have been calls to give artists a dedicated space to display and sell their work in the capital city.

On Facebook, artist Darren Trinity Cheewah came up with an interesting idea:

i want to create art made of old refrigerators and display it at Queens park west since the police throwing away art here lets make art out of things that we have trouble throwing away like tires, used microwaves, galvanize etc.

For his part, Agostini is grateful for the outpouring of support. The whole experience even inspired him to set up his own Twitter account:

feeling great after all the love today thank u to stall, thank u all. thanks Daniel, Jesse and thank u Mayor