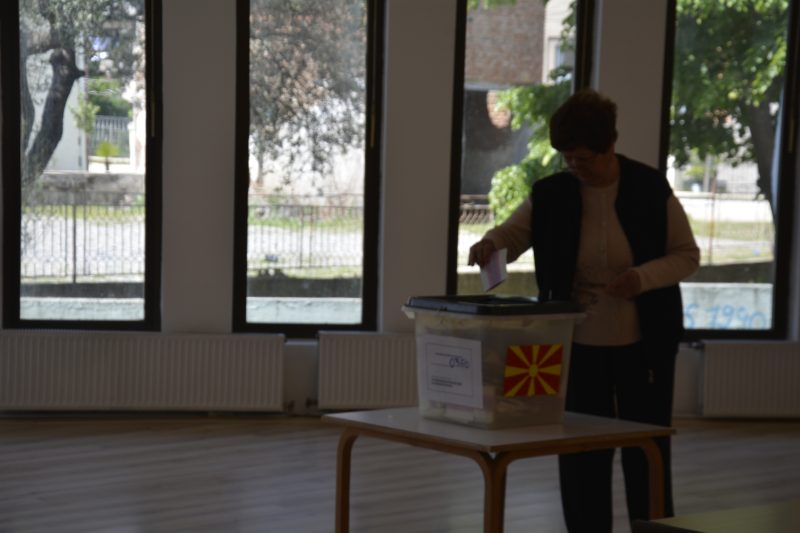 Gevgelija, a small town in the south of Macedonia, made history on April 23 when residents overwhelmingly approved a referendum to block the opening of gold mines in the area that they fear will damage the environment.

Local news portal Gevgelija.net quoted the initial results issued by the municipal election committee, which showed that 98% of the referendum participants cast their ballot in favor of stopping the mines. Out of total of 19,458 Gevgelija citizens in the Voting Registry, 13,097 voted against the mines and 154 voted for them. A total of 68% of eligible voters participated, surpassing the required 50% to validate the result.

The referendum was significant for several reasons. In the 26 years since Macedonia became independent, this was the first successful one, both in the sense of meeting the 50% turnout minimum and in the sense that the majority of voters being cast in support of the demand.

It also represented an important assertion of the will of the people, especially at a time when the outgoing ruling party has been implicated in election fraud.

Election monitoring NGO Civil, declared that the referendum was conducted successfully in a peaceful atmosphere without significant problems, and with only minor irregularities. These included lack of information from the authorities made available to the citizens, as well as cases of group voting and absence of existing voters from the Voting Registry, but they didn't affect the overall outcome.

‘The only gold we need is our children’

Construction has yet to start on the gold mines on nearby Kožuf Mountain, but the companies involved have received the necessary license from authorities allowing them to mine. The prospect of mining in the area stirred this seemingly sleepy border town, which gets most of its income through trade and other services catering to tourists from neighboring Greece. Residents were alarmed that the mines could possibly do irreparable damage to the environment, including poisoning the water table with cyanide, which would be used to treat the gold ore.

An initiative called “Salvation for Gevgelija” used social media to mobilize citizens to vote against the “gold mines of death.” Another of their slogans was, “The only gold we need is our children.”

Images: “Referendum for Salvation of Gevgelija: Vote Against! 23.04.2017″; “Stop the Mines of Death!”; “The Only Gold We Need Is Our Children”; “Stop Dirty Gold, Stop the Gold of Death, Gold Mine Konjsko, Salvation for Gevgelija [from] Cyanide.”

Responding to the concerns of environmental activists from Gevgelija, a leading independent TV show called 360 Degrees investigated the Canadian and US companies that received the licenses to mine on Kožuf Mountain. They found out that one of them, Reservoir Minerals, is actually an off-shore company from the Virgin Islands, and quoted the company manager saying it is a subsidiary of a Canadian firm. The journalists could not determine the actual owner of this company, which also has permit to survey about 20% of Macedonian territory for mineral deposits.

Allegedly, it is quite easy to “upgrade” such permits issued for geological surveys to mining licenses, requiring a simple approval from an official at the Ministry of Transport and Communications. 360 Degrees discovered that another, seemingly unconnected, company that received similar licenses in other parts of Macedonia has addresses in the same Vancouver building.

All this raised further concerns for the opponents of the mines on Kožuf Mountain, considering that in the past, foreign direct investments in Macedonia have come from off-shore companies allegedly connected with ruling party officials and their supporters.

Lawyer Aleksandar Tortevski provided additional information via Twitter. He noted that the gold vein runs through the Greek region of Halkidiki, but due to resistance by the local population, the Greek government withdrew the exploitation concessions given to a different Canadian company. He also argued mining companies register in Canada for a reason:

The companies are registered in Canada because its judiciary doesn't provide compensation for pollution and health consequences from such use of cyanide.

Another aspect of the controversy referred to abandonment of the Kožuf Mountain Ski Resort project. It was supposed to be a major tourist attraction. According to the 360 Degrees report, the government neglected to repair the road leading to the resort area, which lead to failure of the project. According to the current plans approved by the government, the nearby area will be used for strip mining.

Activists in Gevgelija have a history of dealing with health hazards. For years, a group called Arsena fought to force authorities to solve the problem of the high levels of poisonous arsenic in the public water supply. Analyses of tap water made by public health institutions in Macedonia and abroad had proved their case.

While the authorities denied that the water was toxic, they announced the opening of new water treatment plants, as well as the digging of new wells during the same period, even performing ribbon-cutting ceremonies in 2014. Actual construction of the new water supply system started in February 2017, thanks to a new European Union-funded project. 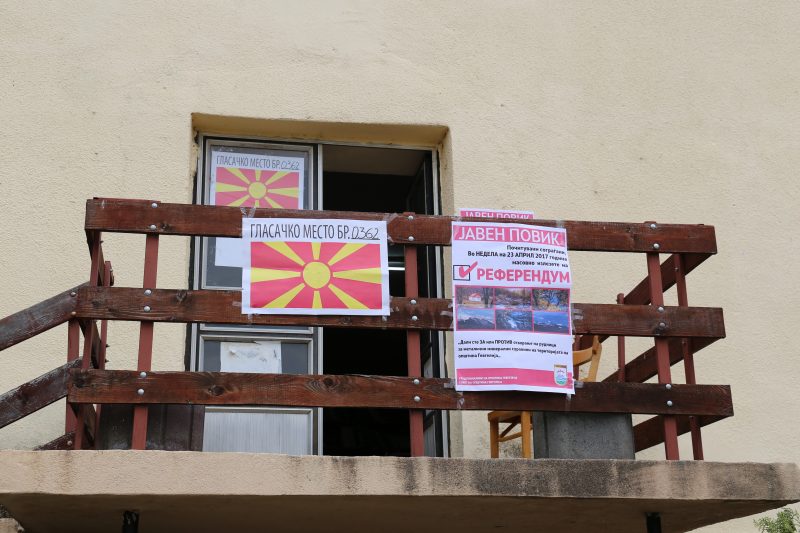 A polling station in village of Miravci, Gevgelija, not accessible for people with disabilities. Photo by Xhabir Deralla, CIVIL, published with permission.

No sabotage — unlike in referendums past

The success of the referendum came as a relief to many observers who feared that the outgoing ruling party VMRO-DPMNE would “sabotage” the referendum like they did the one to preserve the integrity of the iconic open Shopping Center (GTC) in the Macedonian capital Skopje in 2015. That referendum failed, as the number of participating voters was below the legal threshold.

The opposition at the time accused the government of issuing an order to its supporters not to participate. A ruling party official formally denied these claims then. However, political parties in Macedonia have access to voting records and can see who participated in voting, so it is easy for them to verify whether someone obeyed such an order to boycott. Under such circumstances, Macedonians fearing repercussions for disobedience just don’t show up to vote.

Another factor that doomed it was the threshold for the referendum to be considered valid was inflated due to so-called phantom voters being added to the Voting Registry — the more voters in the registry, the more voters that need to participate to reach more than 50%. Leaked phone conversations of government ministers indicated that Skopje’s Centar municipality was particular target for adding fake voters in the registry.

Meanwhile, as part of the reforms related to the country's general elections, parts of the Voting Registry had been checked and “cleaned.”  Therefore, the huge turnout in Gevgelija had been presented as legitimate expression of the will of the local people.

However, the Gevgelija referendum outcome is not legally binding.  Now it is up to the government, and in particular to the Ministry of Transport and Communications, to revoke the mining license.