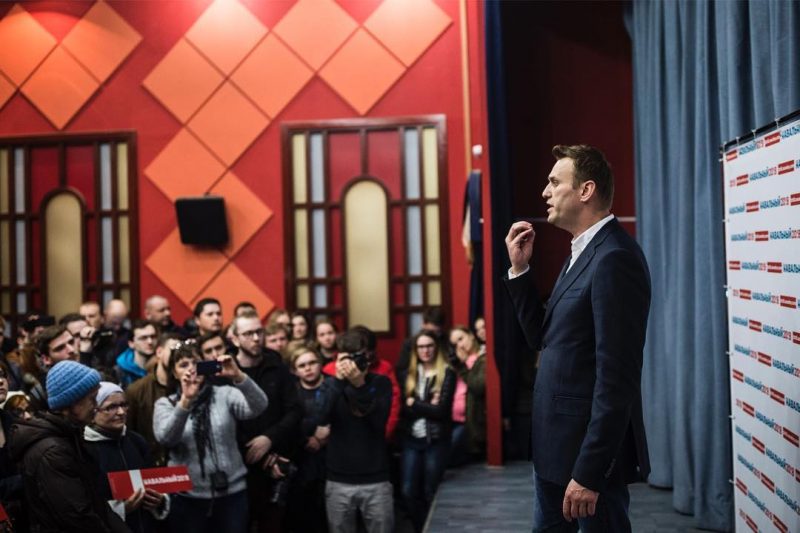 In February 2011, about nine months before Alexey Navalny became internationally famous as one of the leaders of the anti-Putin Russian opposition, The Guardian published a story about him titled “Russia’s Chief Whistleblower Wants to Jail the Corrupt.” The article featured a picture of Navalny in a decidedly uncool sweater vest.

The next day, Navalny joked on his LiveJournal blog, “I don’t know why all these silly foreigners like to use these photos. A possible explanation is that, in every foreign media story about me, it’s required to mention very carefully that ‘this man’s views are, generally speaking, a bit similar to the views of nationalists.’ In the minds of Europeans and Americans, the sweater vest is the symbol of a four-eyed nerd. Maybe a ‘nationalist-nerd’ is less frightening somehow.”

More than six years later, Navalny has come a long way. Before the end of 2011, he was leading huge crowds of protesters against parliamentary election results. In 2013, he challenged Moscow’s incumbent mayor and nearly forced a runoff vote. On multiple occasions now, Russian courts have convicted Navalny of serious crimes, resulting in suspended sentences and a felony record that technically bars him from running for president next March. Even so, Navalny is running for president, though it’s unlikely he’ll be allowed onto the ballot.

The man who started out as a “nationalist-nerd” with a LiveJournal account is now an international political figure, regularly described as “the leader of the Russian opposition,” with a growing array of online media and civic projects at his command. In mid-April, Navalny’s team reported that more than 77,000 people had signed up to volunteer in his presidential campaign, almost 320,000 people had endorsed his right to appear on the ballot next year, and more than $690,000 had been donated.

Alexei Navalny's presidential campaign has enjoyed some explosive success since he decided to take on Prime Minister Dmitry Medvedev. pic.twitter.com/MfPGN3KH1f

Earlier this month, the independent TV station Dozhd reported that domestic policy officials in the Putin administration were planning a mudslinging campaign against Navalny, apparently designed to depict him as a fascist. The very next day, a sleek viral video appeared on YouTube — made in the same style and with the same high production value as past pro-Kremlin viral videos — comparing Navalny to Adolf Hitler.

After less than a week, YouTube removed the video due to copyright violations, but duplicates still circulate, and the original clip attracted more than 2 million views before it was taken down.

The people behind the video are apparently hoping to discourage support for Navalny by exaggerating his nationalist views and reminding the public about a younger man who leveraged nationalism to make a name for himself.

But digging up Alexey Navalny’s nationalism also does something else: it reminds Russian nationalists that he’s abandoned many of the views and much of the rhetoric that used to unite them.

And what does it matter if these people are upset?

Russian nationalists are notorious for embellishing their own political weight. In 2008, Navalny himself claimed that 40 percent of all Russians are “naturally inclined towards nationalism.” Three years later, Alexander Belov (a prominent nationalist now doing 7.5 years in prison for multiple felonies) said that 70 percent of Russians are nationalists “but they lack political representation.”

Looking at electoral politics in Russia, it’s difficult to justify these numbers, and yet it’s undeniable that the vast majority of Russians, including many Russian nationalists, embraced the annexation of Crimea. In fact, many political analysts today argue that a so-called “Crimean Consensus” sustains Vladimir Putin’s enormous popularity.

A decade ago, Navalny was too nationalist to win over the liberal intelligentsia, but now he risks losing support among old comrades and the general population because he’s not nationalist enough.

This, at any rate, was Alexandr Khramov’s warning in a text published last Friday on the new nationalist website “Russian European.” A former coordinator for the nationalist movement “Russian Civic Union,” Khramov separates Navalny’s political history into two stages: “the healthy man’s Navalny” and “the smoker’s Navalny.”

In 2007, he helped launch the “NAROD” nationalist movement, which merged liberal politics with nationalist aims, including a call for free elections, an end to state monopolies in the news media, and Russia’s recognition of the sovereignty of Transnistria, Abkhazia, and South Ossetia. A year later, when war broke out with Georgia, Navalny again endorsed Russian recognition for South Ossetian and Abkhazian independence, joking that President Saakashvili demonstrated a Hitler-like desire for territorial expansion into foreign lands.

Khramov marvels at how Navalny remained loyal to his nationalist allies in the early days of the “Bolotnaya Movement” in December 2011, when Navalny insisted that they get access to the microphone at major protests.

According to Khramov, after Navalny skipped the Russian March two years in a row, “the smoker’s Navalny” took over in March 2014, when he tried to stake out a position on Crimea. On March 12, 2014, Navalny published a blog post that was supposed to clarify his views on the annexation. In that text, Navalny argued that Moscow’s endorsement of the Crimean referendum to leave Ukraine for Russia risked a similar secessionist vote in Chechnya — a strange concern, given Navalny’s past support for jettisoning Chechnya altogether.

Navalny’s position on Crimea makes no sense to Russians like Khramov, who view it as a cheap political trick to deny Putin credit on “the one thing he got right.”

“The story with Crimea, where Putin acted like a Russian nationalist for the first and only time in his 15-year rule, plunged Navalny into deep confusion. He didn’t know how to act. Support the reabsorption of Crimea? But then they’d consider you a Putin supporter. Oppose it? Well then say goodbye to your patriot image,” Khramov wrote, complaining that Navalny ultimately ditched his nationalist, populist roots to win favor with liberals and foreigners.

In a recent interview, Navalny even said, “The Caucasian question isn’t any different for me than the Russian question — everything is just much worse there. The salaries are even lower there, and there’s even more corruption.”

For Russian nationalists, this comment is absolutely ludicrous. “In Russia’s back country, there are also low wages, but have you ever heard about tractor drivers or milkmaids from some Russian boondocks planting landmines or running off to take part in Middle Eastern jihad tourism?” Khramov asks.

A decade ago this December, Navalny delivered a speech to the liberal political party Yabloko, where he downplayed the dangers of “DPNI,” a nationalist movement later banned for extremism, and argued that the manifesto of his NAROD movement was perfectly compatible with Yabloko’s party platform. Knowing he was about to be kicked out, Navalny ended his remarks by shouting “Glory to Russia!” — a rather militant slogan at the time.

Navalny blamed the ouster on the party’s older politicians, who didn’t appreciate his criticism during the 2007 parliamentary elections, when Yabloko lost all its seats in the State Duma.

Ten years later, Russia’s liberal opposition still doesn’t have any representation in the parliament, and the old gatekeepers — the people who tossed out Navalny — can’t even open the door for themselves.

A one-man powerhouse who showed us last month that he can almost single-handedly mobilize thousands of protesters nationwide, Alexey Navalny is now bigger than his erstwhile allies at Yabloko. He’s bigger than all his old rivals.

But in a post-Crimea Russia, Navalny may have given up his populist edge over Putin, on the way to becoming the darling of Russia’s opposition.