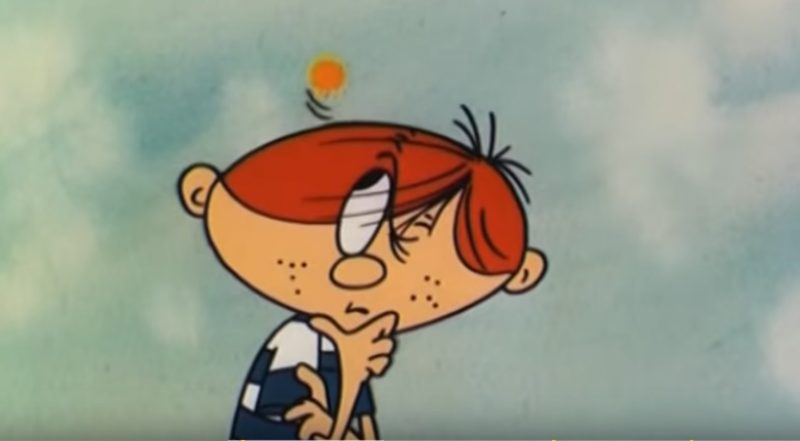 Dobromir before one of his “Eureka!” moments. Screenshot from the cartoon.

How can Science, Technology, Engineering and Math or STEM subjects become more appealing to children?

A Polish TV cartoon series from the 1970s proved that STEM subjects can be both entertaining and popular at the same time.

Pomysłowy Dobromir is a popular series of animated cartoons produced in Poland from 1973 to 1975 by Roman Huszczo and Adam Słodowy. The title is a loose translation for “Inventive Dobromir”. The word pomysłowy can also mean clever or ingenious, while the name Dobromir comes from the root “dobro” which means “good” in all Slavic languages.

The main character is Dobromir, a bright kid who thinks of solutions to various everyday problems on his grandfather's farm. After analyzing a problem, he makes models and prototypes of mechanical devices. The process is presented in an entertaining animation with catchy sound effects. But more importantly, it explains the basic principles and functions of the mechanical devices made by Dobromir.

The series has 20 episodes promoting the scientific approach among children. Each episode combines concepts and practical applications related to science, technology, engineering and mathematics, which reflects the interdisciplinary approach of the current STEM curriculum.

The screenwriter of the series was Adam Słodowy, an inventor and TV personality who for decades hosted the “Do-it-Yourself” show on Polish national TV.

Some of the devices featured on the series included water pumps, harvesters, and timepieces. Check out how Dobromir was able to build these devices using simple tools by watching the cartoons below:

Poland did not have much opportunity for cultural export as a country situated deep behind the Iron Curtain during the Cold War era. However, its cartoon industry managed to transcend both the national and the Soviet bloc borders, and became popular all over Central and Eastern Europe, including the non-aligned Yugoslavia.

Many Polish cartoons, including Dobromir, have little or no talking among the main characters, which adds to their universal appeal even decades after their original broadcast. Most of them are available online on both official Youtube channels and also through the versions posted by enthusiastic fans.