A House Divided: Ethiopian Runners Separated by Politics Face Off at London Marathon 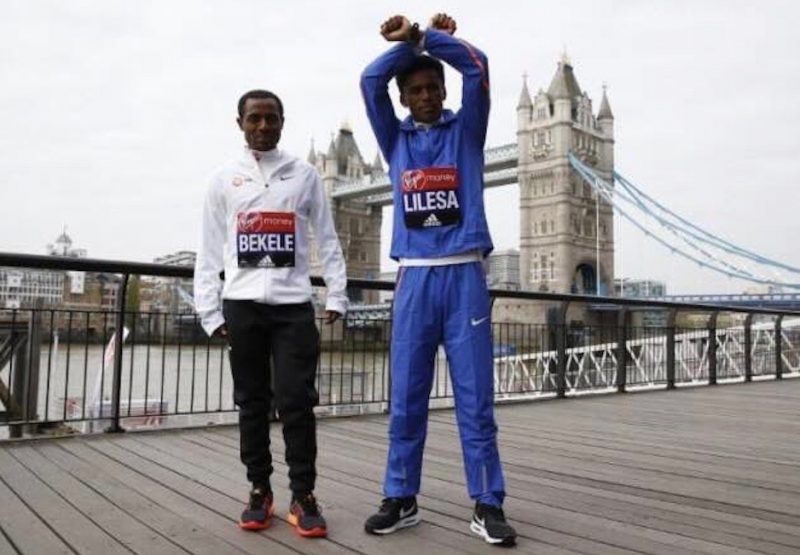 Ethiopians may suffer from conflicting allegiances Sunday as two Ethiopian elite runners Feyisa Lelisa and Kenenisa Bekele take to the streets of London for the 36th edition of the London Marathon.

Both Feyisa and Kenenisa hail from Ethiopia’s largest ethnic group, Oromo. But what sets them apart is politics; Feyisa is a dissident athlete who lives in exile in Arizona, while Kenenisa has refused to criticize the Ethiopian regime, despite its ongoing persecution of citizens of Oromo heritage.

At the Rio Olympics last summer, Feyisa Lelisa made himself a political exile when he showed solidarity with protesters in Ethiopia by displaying their protest sign after he crossed the finish line to claim a silver medal.

Three weeks after Feyisa’s protest, Kenenisa Bekele criticized Feyisa’s gesture and called for a separation of sport from politics.

Kenenisa, 34, is the most decorated Ethiopian athlete of all time, holding numerous world records and four Olympic medals. At the end of an illustrious career on the track he began running marathons. Last September, Bekele won the 2016 Berlin Marathon with a time of 2:03:03 — the second fastest marathon of all time.

Feyisa, 27, burst onto the long-distance running scene in 2008. Since then he has enjoyed momentous success in marathons, picking up wins in Dublin, Xiamen and Tokyo. Feyisa hero-worshipped Kenenisa as a youngster, but has refused to back down from his political stance.

In an interview with BBC Africa, Feyisa said he will continue his protest against the government in the London Marathon and said that “the blood is flowing” in Ethiopia.

The crossed-arm protest gesture Feyisa famously used in Rio dates back to a series of uprisings that began in Oromia — the state from which both Feyisa and Kenenisa hail — in April 2014.

The movement that emerged following a contentious government plan to expand the territorial limits of Ethiopia's capital, Addis Ababa, into neighboring Oromia villages and towns, subsequently expanded into other parts of Ethiopia, as participants rallied behind broader grievances against the government.

While the government has since tamped down the protests by declaring a state of emergency, Feyisa's signal of solidarity with the historically marginalized Oromo people at the Olympics offered the movement a major boost as international media moved to highlight political repression in Ethiopia.

Since then, he has appeared in European parliament along with Ethiopian opposition leaders to testify about Ethiopia’s human right situation. He has asked the US government, a strong ally of the Ethiopian government, to consider its relationship with Addis Ababa. And he has repeated his protest signs in several of the competitions he has entered since Rio.

Thus, when Feyisa and Kenenisa face each other on Sunday, there is more at stake than just athletic honor.

On social media, Ethiopians are divided as to whom to support. But many diaspora based activists have made it clear they view megastar Kenenisa as a regime apologist.