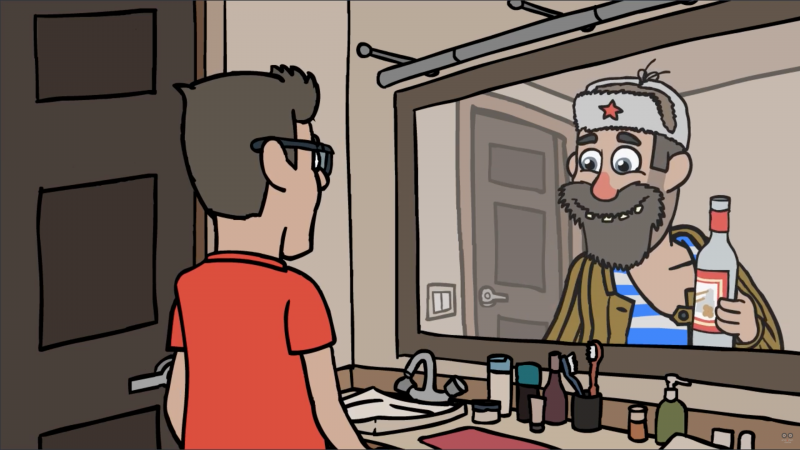 In January 2016, American Internet comedian Rudy Mancuso released a short film titled “Racist Glasses,” where a man finds a pair of eyeglasses that transform anyone seen through the lens into racist stereotypes. An Asian man becomes a ninja, white people become rich snobs, and Mancuso’s own character (a Latino man) changes into an ululating sombrero-wearing dancer.

This week, Russian animator Alexey Yurevich produced his own version of Mancuso’s video — a cartoon with the same premise but a uniquely Russian spin.

When he puts on the glasses and looks around, a group of North Caucasian men standing around innocently are suddenly dancing the Lezginka, and preparing to abuse a sheep. A Central Asian man sitting quietly on a park bench is now in overalls, slapping down cement to repair the sidewalk. A moment later, with the glasses back on, he’s picking at his toes and littering. The protagonist then turns to an Arab man, who’s now firing off guns and exploding a suicide vest. Next he looks at what turns out to be a Ukrainian man, who’s revealed to be jumping around with a tire for a belt and a colander for a helmet. Chanting is then audible, and he tosses a Molotov cocktail — a nod to the Maidan revolutionaries.

At this point, the man who found the glasses races home to look in his bathroom mirror, where he comes face to face with a bearded Russian drunkard wearing an ushanka and holding a bottle of vodka.

The cartoon is almost a scene-for-scene remake of Mancuso’s “Racist Glasses,” but the stereotypes portrayed are local to Russia.

In an interview with the website TJournal [2], Yurevich said he even changed the film’s title, to adapt it to what he sees as the specific nature of ethnic conflict in Russia. “In [my video], it would be more accurate to say it’s about how nationalists see everything,” he said, explaining why he dropped the word “racist.”

“The issue of racism is more appropriate for the U.S. than Russia,” Yurevich told TJournal, raising a distinction that many Americans might struggle to understand.

Yurevich’s film studio, “Animaction Decks [3],” is best known for a hyper-violent Flash-animated series called “Ninja Action,” where the titular ninja battles his way through 10-15 minutes of murderous killing in the style of a side-scrolling video game.

For example, when Putin takes on opposition leader Alexey Navalny, the latter simply kneels in defeat, as soon as the fight begins. When Putin raises his arm in victory, the announcer says, “Putin is a thief,” instead of the traditional “[Putin] wins!” Putin’s eyes bulge in surprise, and he then places a call to his goons, who beat up the announcer off screen, until he corrects himself and finally adds, “flawless victory.” (These phrases are all cherished tropes of the original arcade game by Midway first released in 1992.)

In March 2016, weeks after an Uzbek nanny carried the decapitated head of a four-year-old girl through downtown Moscow, Yurevich created another short cartoon, this time clearly enraged that his fellow countrymen weren’t more shocked by the horrific murder.

He titled his video “Reactions to Terrorists in Different Countries,” depicting the U.S. as a place where “terrorists” are shot on sight, Europe as a place already populated by jihadists, and Russia as a place that is indifferent to what he depicts as terrorist violence.

Editors’ note: Gyulchehra Bobokulova, the nanny who beheaded four-year-old Anastasia Meshcheryakova, was later found to be mentally unbalanced, and today her crime is not generally viewed as an act of terrorism.

Speaking to TJournal, Yurevich said he views “Reactions to Terrorists in Different Countries” as the worst cartoon he’s made with Animaction Decks. “Despite the fact that the theme was inspired by real events, I didn’t try to depict them in the cartoon. The image of the ‘terrorist’ was a collective, not concrete picture,” he said.

Yurevich also told TJournal that he’s taking a break from political content, unless something really captures his imagination. “I’m just going to work on my main cartoon series, Ninja Action,” he said, adding that producing one episode can take him anywhere from a few months to several years.