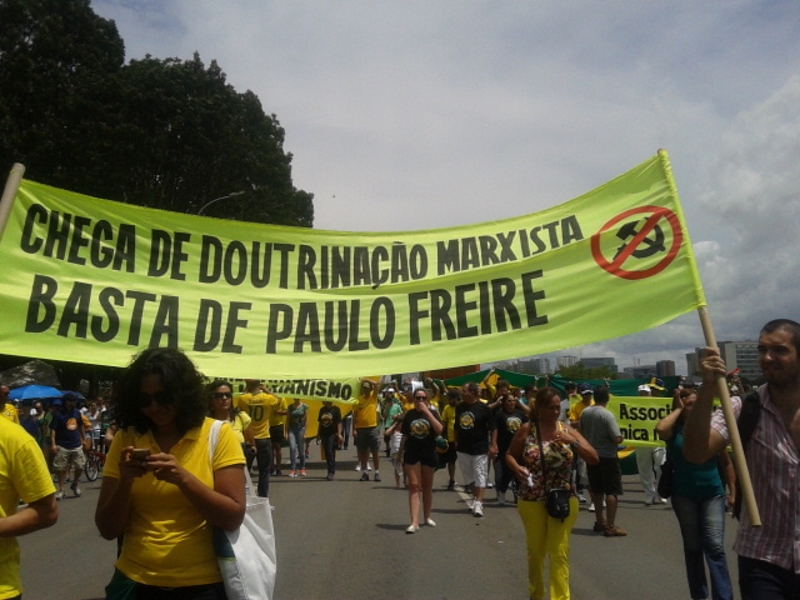 A surprise visit by city councilor Fernando Holiday to schools in São Paulo reignited the controversy around the campaign “Escola Sem Partido”, or School Without Party, which claims to combat “ideological indoctrination” in schools, but is seen by its critics as an instrument for censoring teachers and students.

On 3 April, Holiday popped into two municipal schools in São Paulo unannounced with the objective of investigating incidences of “indoctrination” by teachers. The visit was broadcast live on his Facebook page, where he said:

We are going to check […] the content that is being taught in classrooms, that is, if there is any type of ideological indoctrination, if the teachers are teaching what they really should be teaching, in accordance with the curriculum, or if there are teachers entering there with a T-shirt of the PT [Workers’ Party], or of the MST [Landless Workers Movement], throwing everything up in the air and doing that damn indoctrination that we already know.

Fernando Holiday, 20, was elected to São Paulo's city council by the right-wing party Democratas (DEM) in 2016, helped there by Movimento Brasil Livre (Free Brasil Movement), or MBL, for which he acts as national coordinator. The MBL was at the front of the protests which brought about the impeachment of ex-President Dilma Rousseff, and today galvanizes the popular base of Michel Temer’s government and São Paulo mayor João Dória Jr.

MBL is a vocal supporter of the Escola Sem Partido campaign, which has the stated objective of combating “ideological indoctrination” in secondary schools. Supported above all by conservative sections of Brazilian society, the campaign starts from the presumption that there is a predominance of teaching content which would be identified as having a “left-wing” worldview, spanning from defending minority rights to sex education and criticism of economic liberalism.

Holiday's live video sparked a wave of demonstrations against Escola Sem Partido and the city councilor's inspections. Secretary of Municipal Education Alexandre Schneider reacted in a Facebook post, stating that “the councilor exceeded his mandate and cannot use his position to intimidate teachers”. 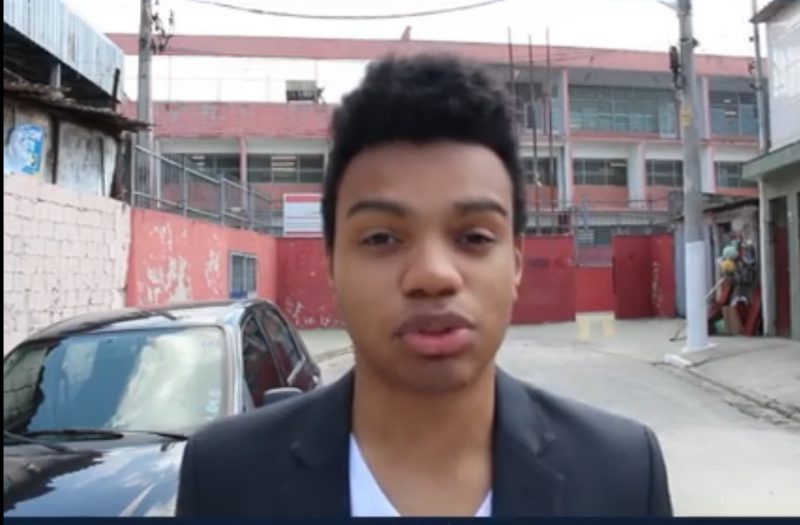 São Paulo city councillor Fernando Holiday in one of the schools he visited on 03 April. Screenshot/Facebook

On 13 April, UN rapporteurs sent a communique to President Michel Temer’s government, criticizing legislative projects stemming from Escola Sem Partido. The report, signed by the special reporters on education, freedom of expression, and freedom of religion, stated that the movement’s proposals are vague and could “cause censorship and self-censorship of teachers”.

After the communique’s publication, the movement’s founder, Miguel Nagib, published a Facebook post calling it “dishonest”. Federal Deputy Marco Feliciano, who is a minister of the Universal Church and is known for his homophobic views and support of the Escola Sem Partido, uploaded a video on his YouTube channel claiming that the UN’s opposition showed that the campaign was “on the right path”.

What is the Escola Sem Partido?

The movement was created in 2004 to denounce and repress what its supporters considered to be practices of ideological indoctrination in schools. Its manifesto proclaims that the country’s classrooms are used as places for the dissemination of political ideologies and content which could be in conflict with the moral and religious convictions of students’ parents. Nagib often says that the practice is a “notorious fact”, without, however, presenting empirical evidence that supports such a claim.

Since 2014, the movement has been bringing legislative projects to the Chamber of Deputies, the Federal Senate, and various legislative state assemblies in Brazil. One such initiative of theirs was passed into law in the state of Alagoas in 2016, but in the end it was revoked by the Supreme Federal Tribunal in March – the court decided that the state legislature did not have the power to legislate on general norms for education.

Their proposals aim to include conditions on political and ideological neutrality in Brazil's Education Law, as well as create mechanisms for controlling the professional activities of teachers. Critics assert that it would result in the violation of teachers’ freedom of expression and a policing of the school environment that would compromise the free flow of ideas.

There is, for example, no fixed definition of what constitutes, or not, the practice of indoctrination, except for the vague stipulation that a teacher must present the main opinions on a topic. It is not clear if subjects which have, in practice, an academic consensus, such as the evolution of species or global warming, would be treated as controversial.

Another controversial point in Escola Sem Partido’s program is the attempt to censor content which could be seen as “gender ideology” – a concept not used in the humanities, but pushed by some conservative circles that opposes gender fluidity and the increasing societal acceptance of sexual diversity.

While their legislative projects are being debated in Congress, the movement continues gaining space in society and institutional politics. In May 2016, Education Minister Mendonça Filho found himself in his office with actor and well-known supporter of Escola Sem Partido, Alexandre Frota. Frota was received as a representative of Revoltados Online, a right-wing activist group whose Facebook page ended up being deleted for propagating hate speech.

Another example is that of Ana Caroline Campagnolo, 25, who brought a legal case against her former master’s degree supervisor, Marlene de Fáveri, 57, a researcher in gender studies at the State University of Santa Catarina. Campagnolo, who has substantial support from MBL and Escola Sem Partido, is asking for 17,500 reais (5,700 US dollars) in damages for feeling discriminated against by Fáveri for identifying as Christian, conservative, and anti-feminist.

After his statement on Facebook, Secretary of São Paulo's Municipal Education Alexandre Schneider was the target of a massive trolling campaign by supporters of Fernando Holiday and MBL.

City councilors Sâmia Bonfim and Isa Penna, both of the Partido Socialismo e Liberdade (Socialism and Freedom Party) publicly declared their support for Schneider. Their telephone numbers were then leaked on social media, leading to them receiving threats. The case reached São Paulo’s Department of Digital Crimes, which is investigating the website JornaLivre, linked to MBL, for its involvement.

According to the newspaper Folha de São Paulo, Schneider submitted his resignation after what he considered to be a lack of support from the mayoral office in the face of the attacks, but São Paulo Mayor João Dória Jr. then convinced him to stay. However, the mayor denies that the resignation request even happened and is taking a neutral position in the dispute between the secretary and the councilor, claiming that “both aggravated it, and both had reasons”.

Meanwhile, Fernando Holiday, who also faces accusations of having used undeclared resources in his electoral campaign (a practice known in Brazil as “caixa 2”, “cash-box 2”), said on his Facebook page that he will continue to “invigilate” the municipal schools of São Paulo.