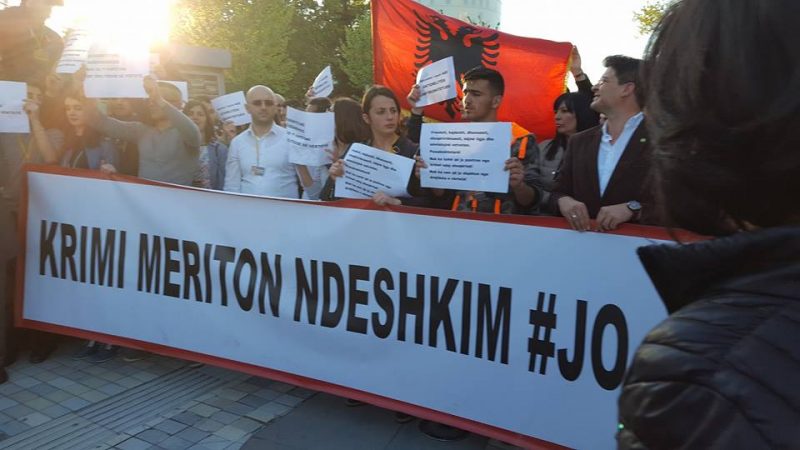 Protest in Tirana, April 11. Photo courtesy of “No to Article 449, No to Amnesty for Crimes” Facebook page. Used with permission.

Opponents of amendments to Albania's criminal procedural code appear to have won a major victory this week, following President Bujar Nishani's decision not to endorse the reforms, after two protests in the nation's capital.

Lawmakers who support the legislation say it's a precondition for Albania joining the European Union, but activists and many lawyers say the proposed changes to Article 449 of the criminal code would further weaken the country's judiciary. Critics say the amendments would prohibit the reexamination of court verdicts, “if the purpose [of the hearing] is to worsen the position of the defendant.”

The legislation's opponents say it could amount to “amnesty” and impunity for politicians, as soon as they're exonerated by corrupt judges and investigators. The campaign against the reforms began with an online petition and later organized a protest outside the president's office on April 8, asking him not to sign the legislation. 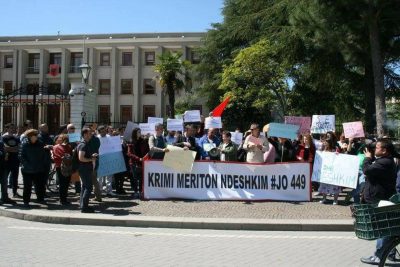 Protest in Tirana, April 8. Photo courtesy of “No to Article 449, No to Amnesty for Crimes” Facebook page. Used with permission.

On April 11, about a hundred activists held a second protest in front of the parliament building. Lawmakers slipped out a back door, rather than face the demonstrators.

With the president's announced refusal to sign the amendments, the legislation would now return to the parliament for further discussion and possibly a vote to override the president's opposition.

Eager to prevent any override vote, activists have been busy on Facebook, hoping to discredit the reforms. One group's main slogans included “So-called judicial reform,” “No to the amnesty of corrupt politicians,” and “No to article 449.”

Under pressure from the EU, which has made judicial changes a prerequisite for accession negotiations, the Albanian parliament adopted the procedural amendments unanimously last July, prompting critics to sneer that the “most corrupt parliament in national history” suddenly devoted itself to criminal reform.

Critics were made all the more skeptical by the nature of the negotiations: representatives from the EU and United States held the meetings behind closed doors, out of public view. Even President Nishani objected to the lack of transparency, sending an an open letter complaining that his office was being excluded from the negotiations.

Just before the parliament adopted the reforms, the media outlet EURACTIV also revealed that Albanian lawmakers demanded assurances from the EU and U.S. that they could rely on immunity to protect their “lives, families, and power bases,” whatever the legislation's final wording.

Since last summer, European and American officials have refused to comment on media reports that Albania's judicial reforms contradict suggestions by EURALIUS, an EU-funded project to help Albania reshape its judiciary.

The Albanian news media largely ignored the protests, but socialist parliament deputy Vasilika Hysi nonetheless took on her critics in a Facebook post, arguing that the amendments won't weaken the courts.

Hysi also said no amnesty will be provided in criminal cases like the Gërdec tragedy of 2008, when 26 people died when an ammunition depot exploded, or the killing of four protesters in front of the prime minister's building in 2011.

Several lawyers and scholars have challenged Hysi's interpretation of the legislation, saying it would indeed offer amnesty insofar as it treats past verdicts as the valid product of a functioning judiciary. 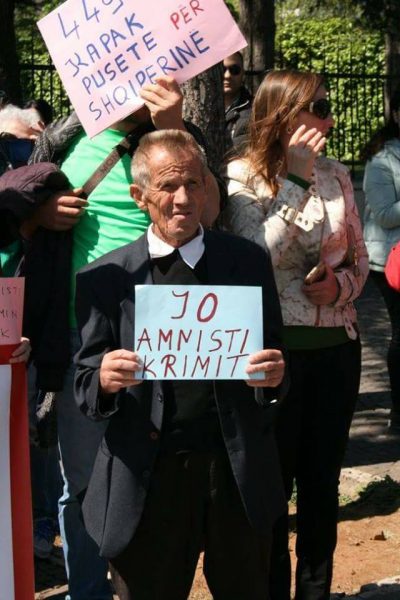 “No for amnesty for crimes,” a man's sign reads at a protest in Tirana. Photo courtesy of “No to Article 449, No to Amnesty for Crimes” Facebook page. Used with permission.

Albania is currently in the midst of a political crisis, due to the conflict between the ruling majority and the opposition Democratic Party, which has boycotted the parliament and recently confirmed that it won’t take part in the upcoming elections, unless a “technical government” is appointed to administer the country.

Albania's ruling majority, on the other hand, has accused the opposition of foul play, saying it's trying to score political points in an election that it's already lost. The ruling party even threatened to vote on the amendments in the opposition's absence.

The 100 or so protesters who came out to oppose the reforms say they didn't expect to gain much mainstream visibility. They demonstrated, they said, because they fear these amendments could have an even bigger impact on Albania than similar legislation had in Romania, where there were also recent protests.

Demonstrators have argued on social media that the EU should have avoided relying so heavily on Albania's politicians, when reaching out to the country.

After President Nishani rejected the amendment, activist Brizida Gjikondi congratulated his comrades on their success, writing on Facebook to thank “all the Albanians who realized the importance of this cause and joined us.”

Though public interest in Albania's judicial amendments is low, the parliament might still try to override the president's decision, and the reforms’ opponents say they will continue their resistance.