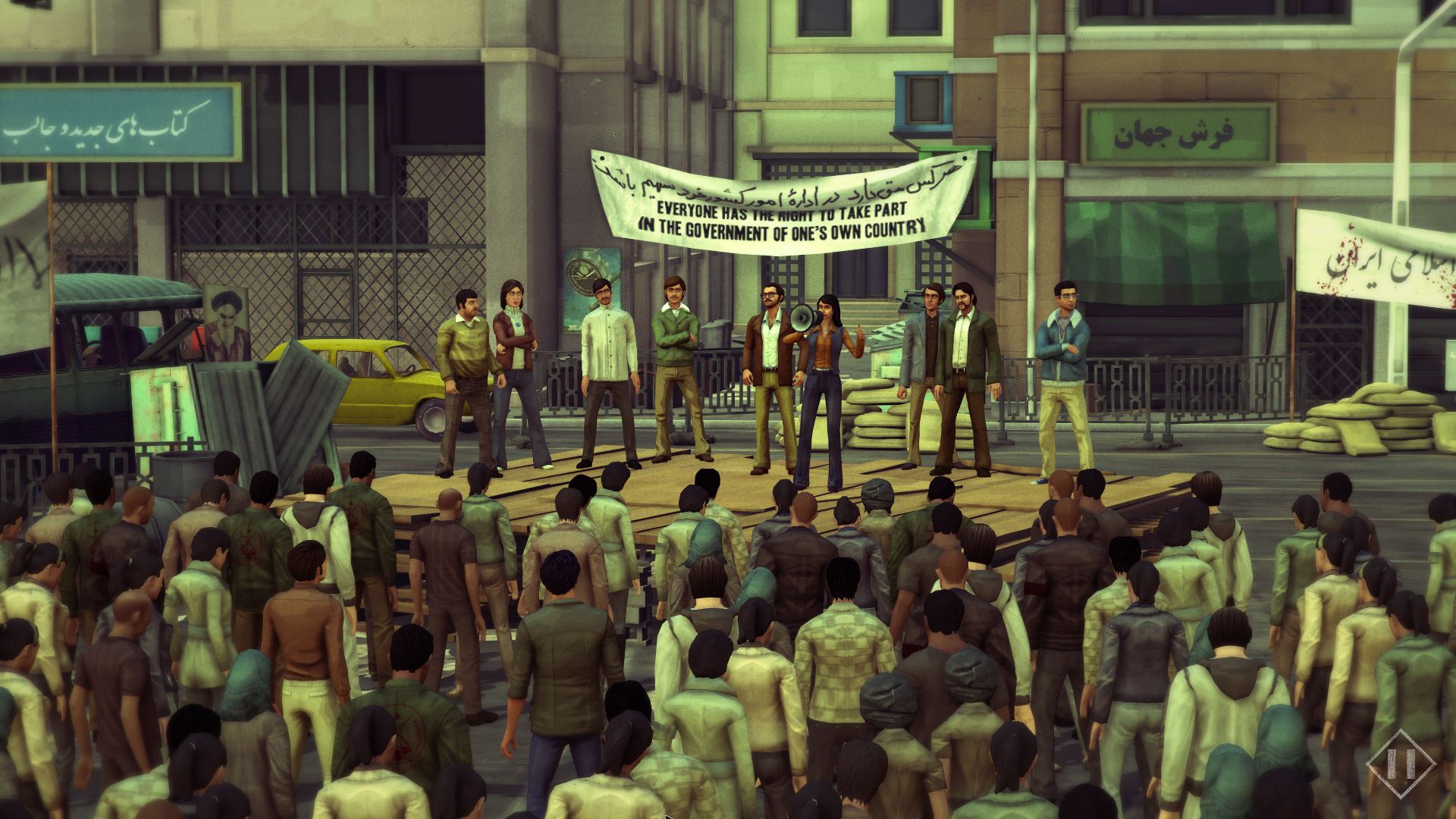 For filmmakers, writers and journalists, the nation of Iran remains a compelling subject. But finding a lens through which to view the country that does not include inherent bias, prejudice, or exoticism is a pernnial challenge. Noble attempts on the part of westerners to “uncover” Iran and show its “human side” have often adopted classically orientalist viewpoints that demonize the country and its history. And many of the works produced by Iranians for North American and European audiences have ended up reducing the country's complexity to simpler tropes for easy consumption by for westerners.

A new Iranian-designed video game, however, achieves the rare feat of providing an accessible and authentic narrative on Iran’s history without compromising on either content or creativity. 1979 Revolution: Black Friday provides an entertaining platform for gamers with a taste for history to explore one of the most iconic revolutions of this past century, and relive events from 38 years ago that have had such powerful repercussions on Iran.

Developed by Navid Khonsari, an Iranian living in the United States, the game employs a “choose your own adventure” style, allowing the player to make meaningful decisions tied to the social and political issues of the day and watch as a complex story unfolds with suspense, drama and intrigue. It features numerous touches that evoke a strong sense of recognition for Iranian audiences, while still keeping non-Iranians in the loop. I particularly enjoyed the voice acting, which, although primarily done in English, is peppered with Iranian phrases and expressions.

A tale of two revolutions

The game’s action starts after the revolution, with the protagonist in the dungeons of the notorious Evin prison being interrogated by one of the monsters of post-revolutionary Iran—Assadollah Ladjevardi, warden of Evin and the chief prosecutor of Tehran. Far from taking the simplistic approach of idealizing pre-revolutionary Iran, the game attempts to examine the political climate that led up to the fall of the Shah, thereby providing a balanced view of the forces at work within the country.

The interplay between the protagonist and Ladjevardi is the game’s focal point, contrasting the two opposing sides that fought against the Shah during the events of 1979. Those who took power after the revolution employed many of the same ruthless political tactics as the Shah, while many who opposed the Shah continued their struggle for freedom. In exploring this dynamic the game reminds us that all revolutions have the potential to produce not only darkness and barbarism, but heroic acts of sacrifice, passion and courage.

The game centers on the choices your character must face as a result of his activities as an activist and photographer. These include philosophical dilemmas such as whether to support non-violence over armed struggle, or allegiance to family over political allies. The player’s choices produce consequences, and mirror the hard decisions activists must grapple with during any revolution.

The game’s only shortcomings are its relative brevity, and the fact that the story sometimes plays out like a movie as opposed to an action-based game. Apart from these issues, 1979 Revolution: Black Friday is smart, engaging and full of heart.

In the real world, the events of the 1979 revolution remain a point of contention both in Iran and in the diaspora. There are those who justify the Shah’s dictatorship, as well as those who romanticize the events, ignoring the complexity of what came after. It is rare to find an account that is not colored by ideology.

1979 Revolution: Black Friday walks that line with reverence for the time period. Revolutionary groups and organizations that took part in the revolution are treated with respect and properly contextualized within the period. The game provides accurate representations of the diversity of groups involved in the events, including leftists and women, two groups which remain politically disempowered in modern-day Iran.

Finally, the game's attention to detail is remarkable. It includes dozens of historical reference points, from pictures and recordings to depictions of important incidents and events. The streets feature graffiti from the era, and the chants and slogans are the same ones that echoed in Iran more than 30 years ago. This interactive history provides an excellent window into the time period by dropping the player into the middle of the revolution.

1979 Revolution: Black Friday’s most severe critique is reserved for the current government of Iran and its betrayals of the ideals for which so many died. This is in line with the game’s spirit of holding those with power accountable and paying tribute to the ideals that inspired change and hope.

1979 Revolution: Black Friday’s ends, fittingly, with a dedication to “all the parents and children of the revolution”—a reminder that their legacy is one that is as relevant as ever.