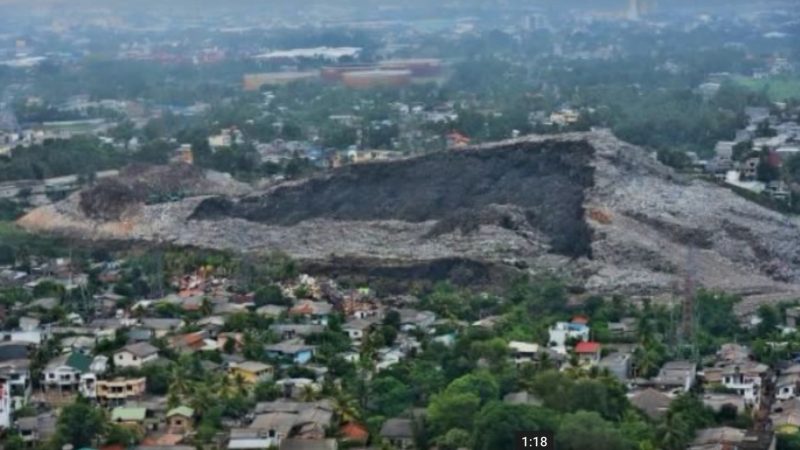 The death toll from last Friday's collapse of the Meethotamulla garbage dump in the Sri Lankan capital Colombo rose to 28 people this Monday. Rescue workers say another 30 people are still trapped under the mud and debris, though hopes are fading that any of these individuals will be found alive. The garbage collapse buried roughly 145 houses in the Colombo slum.

While people on #Srilanka celebrating #Aurudu2017 people in #Kolonnawa suffer from the waste disposed by us. https://t.co/Wk1nfSi2ep

The 90-meter-high, 180-meter-long garbage dump collapsed last Friday, when a fire broke out. More than 1,000 emergency workers, including members of the armed forces, have been working to clear the wreckage. Almost as many people — 980 individuals in 228 families — are believed to have been affected by the disaster, and everyone in the danger zone has been evacuated and housed temporarily in a nearby school.

According to the police, state investigators are still trying to determine the cause of the landslide, and whether it was manmade or natural.

Meethotamulla is notorious for its 16-acre garbage mountain and the strong stench that emanates in the air for miles.

Almost daily, trash collectors from the capital dump around 800 tons of municipal waste in Meethotamulla, often in haphazard ways that ignore basic safety protocol. This has been the case for the past two decades, and the locals living in the vicinity has long worried they could be buried under garbage, in the event of a natural disaster.

Years ago, officials planned to decommission the garbage dump and convert it into a “beautiful place.” This ambitious plan never materialized, however and now the locals find themselves confronting their worst fears.

Raisa Wickrematunge, a reporter at Groundviews, writes about the several ongoing plans to move the dump:

The issue of garbage disposal, and how to solve it, is complex and has long been debated. In 2015, there was a plan to transfer the compacted garbage at Meethotamulla to Puttalam, which came to a temporary standstill after environmentalists raised protests, as the new site at Arawakkalu fell within the Wilpattu buffer zone. The project was restarted at a different site, but with plans to allow the Meethotamulla dump to decompose. Other plans have included simply shifting the garbage to other areas such as Ja-Ela.

As recently as March this year, residents were agitating against the dump. Officials meanwhile, have continually said they are working towards a long-term solution, with the help of foreign experts.

Despite these plans and discussions, the dump in Meethotamulla only grew and grew. According to a report by Roar.lk, the Colombo Municipal Council has been in charge of the dump for the past two years, and has failed to maintain the site as well as the Sri Lankan Army, which used to call the shots.

The Sri Lankan government says it will pay 100,000 Sri Lankan rupees ($660) in compensation to the families of every individual killed in the Meethotamulla disaster, and up to 2.5 million rupees ($16,500) for property damages.

Many Internet users have nonetheless reacted negatively to the government's response.

When there is a disaster in #SriLanka #lka

Apparently no doctors came to #meethotamulla to help out with the rescue mission. So much for all that love for the general public.

Following the tragedy, the Sri Lankan government also announced that it has finally decided to retire the garbage dump in Meethotamulla, and will begin work on a waste-to-energy project which will ensure that the accumulated municipal solid waste (MSW) is disposed of in a hygienic and sustainable manner.