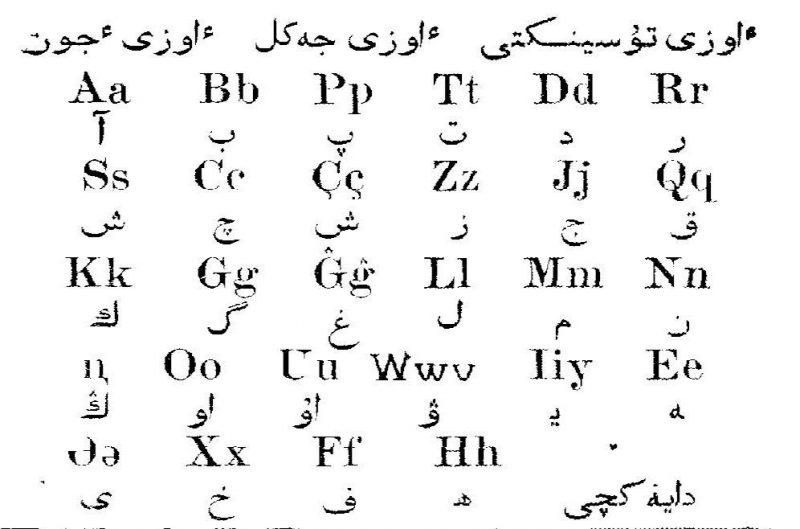 Kazakhstan's latin script, as used under the Soviet government prior to the switch to cyrillic. The languages has also been rendered in Arabic script in the past. Public domain image from 1924.

As Kazakhstan's 76-year-old authoritarian President Nursultan Nazarbayev battles with his own mortality and a pronounced economic slowdown, he has become increasingly fond of making grand announcements and issuing legacy-shaping decrees.

This was evident most recently on April 12, when he ordered authorities to begin preparing for the switch from the Cyrillic alphabet to a Latin based script. The switch will begin by the year's end and should be finalised by 2025.

The initiative is part of Nazarbayev's strategy to make Kazakhstan one of the 30 most developed countries in the world. In his article published in the Kazakh state newspaper “Егемен Қазақстан” (Independent Kazakhstan) he wrote that switching to the Latin alphabet has “deep logic” and will help adapt to “contemporary technology and communication as well as scientific and educational developments in the 21st century”.

Some laud the switch as a means of developing Kazakhstan's Turkic-based language, which is often overshadowed by Russian in public life. Facebook user Tolegen Baitukenov, for instance believes that Latinisation is better suited to Kazakh, and will help non-speakers learn it more easily:

Others see it as a drift away from what Russian President Vladimir Putin rather presumptuously calls a “Russian World” (Русский мир) that includes countries such as Kazakhstan, something Putin ally Nazarbayev has insisted is not the case.

But many see instead of both these things a massive waste of scarce budgetary resources.

I see that many are concerned with this news of switching to Latin script more than corruption among high-ranking officials, low living standards, or police and judicial lawlessness in Kazakhstan. There are so many problems in the country that should be immediately addressed. Billions of dollars will be spent for restructuring the education system. How can changing the alphabet solve the problems in our education system? […] All languages of the world are already integrated into the modern computer — even hieroglyphs. Chinese, Japanese and Koreans are not going to change their script to better adapt to contemporary challenges.

Look the other way, now!

Ablyazov, who has made no secret of his desire to bring down the government, and who is being tried in absentia for massive-scale fraud in Kazakhstan, also noted in his post that the government regularly uses announcements such as these “to distract from more current problems” in the country.

Kazakh social media users know that strategy too well. As recently as March, an MP in parliament — not for the first time — raised the issue of renaming the capital Astana and “other important state objects” after Nazarbayev, just as the government was preparing to divert $3.4 billion to the country's struggling banking sector. The MP's comments became a key talking point, while news of the bailout slipped into the background.

In this vein, Facebook user Zhanara Akhmet wrote that the long-planned alphabet-switch might have been sped up in order to divert attention from another unpopular government initiative. Specifically, Akhmet noted that lawmakers had begun discussing once more a controversial land reform bill that was shelved after anti-government protests of unprecedented scale.

Elsewhere in Central Asia, the region's two most autocratic countries, Uzbekistan and Turkmenistan, long ago made the switch from Cyrillic to Latin, with few obvious benefits.

Uzbekistan-born journalist Daniil Kislov, who edits the popular Central Asia-focussed Fergana News website called in a blog for Kazakhstan “not to repeat the same mistake” already made by his homeland's government:

The said transition period is going to be long, expensive and painful, as it will consume so much in terms of financial, emotional and intellectual strength from society, that the historical and cultural effect of the Latin script could be rendered completely ineffective.

Those words will likely fall on deaf ears, however, such is the pace with which the legacy of a man declared ‘Leader of the Nation’ in 2010 is taking shape.

With his contribution to the country's development already constitutionally acknowledged, and with parks, schools, a university and films and books dedicated to his honour, the name ‘Назарбаев’ is already firmly inscribed in Kazakhstan's history. Now the wily strongman is determined to see it is written ‘Nazarbayev’, instead.