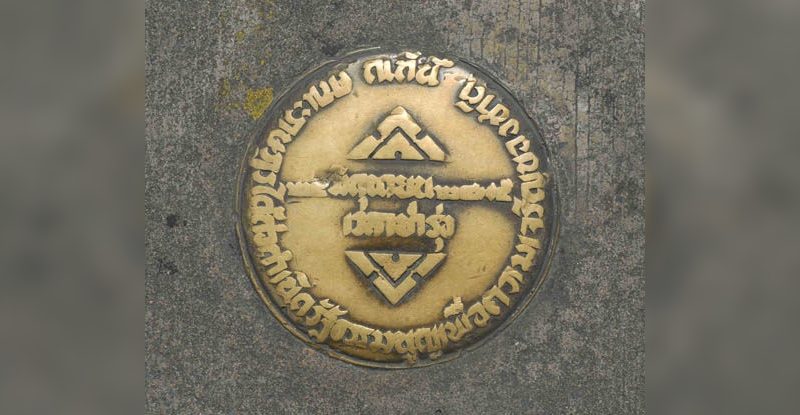 A brass plaque marking the site of the historic proclamation ending 700 years of absolute monarchy in Thailand was mysteriously removed early this month. It was replaced by a new plaque honoring the monarchy.

The plaque, which is only 30 centimeters in diameter, commemorates the June 24, 1932 bloodless coup which led to Thailand’s transition from absolute monarchy to a constitutional monarchy. The event is known as the Siamese Revolution.

The plaque had this inscription:

While the new plaque honoring the monarchy has this inscription:

It also quotes the motto of the Chakri dynasty, Thailand’s current royal house:

Loyalty and love for the Triple Gem, one’s clan and having a honest heart for one’s king is good. These are the tools to make one’s state prosper!

Many activists consider the marker as the site where Thai democracy was born. A national artist also believes the plaque should be considered a national treasure. But royalist forces insist it is an insult to the monarchy, which they describe as a beloved and unifying institution in the country. Some royalist forces even threatened to remove the marker in 2016.

Since 1932, more than a dozen coups have been staged by Thailand’s army. The last coup was in 2014 which saw army leaders occupying top positions in government. The current prime minister is the former army chief. Despite the approval of a new constitution, the military continues to control the bureaucracy. And even if civilian rule is restored once elections are held, the new constitution guarantees continued influence of the military in all levels of bureaucracy.

Since coming to power in 2014, the military-backed government has been aggressive in arresting individuals accused of insulting the monarchy. Critics believe the army is using the Lese Majeste law (Anti-Royal Insult law) to stifle dissent and the clamor for the restoration of democracy in Thailand.

No one has claimed responsibility for removing the plaque. But some are suspecting that the military-backed government could have provided support since it’s nearly impossible to replace the marker without getting attention, as it is located in a busy intersection in Bangkok, the country’s capital. Authorities have denied this accusation.

This is not the first time that a marker honoring the 1932 revolution was removed. In 2014, a monument was demolished by the government in north Thailand.

The blog Political Prisoners in Thailand, which is critical of the junta, accuses the government of supporting those that removed the marker:

Make no mistake, this is an act of political vandalism by a faction that feels it is putting right the “natural” order of things in Thailand, sweeping aside the remnants of 1932.

The junta has demonstrated that it is a part of this reactionary royalism based in a desire to expunge 1932.

Many Twitter users expressed shock over the removal of the memorial plaque. Some even wanted to immediately remove the new plaque:

@rosarinmo @PravitR There is no place for a fake. It should be removed and melt down immediately.

Military regime said no idea who stole Revolutionary Plaque yet not rushing to investigate & catch thieves. More than suspicious! #Thailand

@KhaosodEnglish Removal of the 1932 plaque is an ironic reminder that Thais may have ended absolute monarchy in 1932 but absolute dictatorship exists today.

An online petition was launched urging the government to find the plaque and punish those who defaced the historic marker.