Pick Your Poison? Russian Orthodoxy or Banishment From Social Media 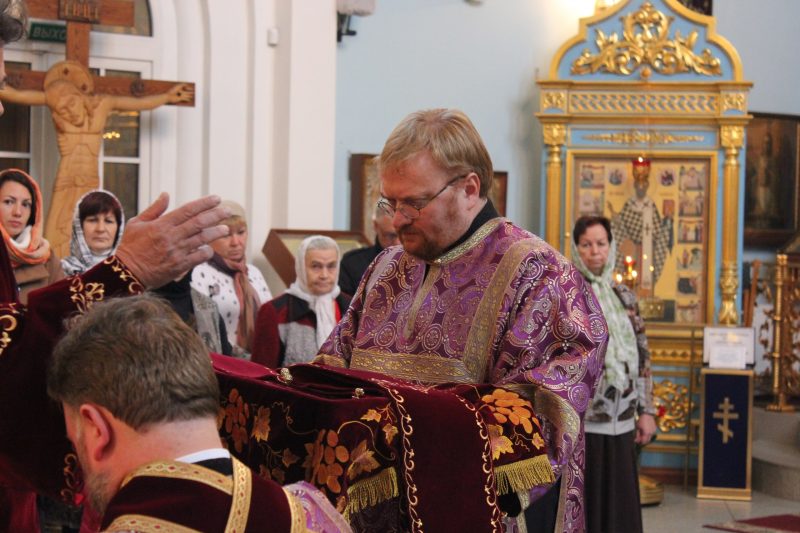 Critics of Vitaly Milonov, perhaps the most reactionary social conservative in the Russian parliament, have vowed to get him banned from Vkontakte, Russia’s most popular social network, where his online status features an “illegal expression” — “Ορθοδοξία ή θάνατος!” (“Orthodoxy or death!” in Greek).

According to the news site TJournal, the campaign materialized this weekend on the imageboard Pikabu, where a user named Vselensky drew attention to Milonov’s controversial status on Vkontakte. Almost seven years ago, a Russian court banned this phrase, and the Justice Ministry later added it to the federal government’s list of banned extremist materials.

Though Milonov has defended the slogan as an affirmation of his commitment to the Russian Christian Orthodox faith (meaning something like “Orthodoxy or I’d rather die!“), the judiciary ruled that the phrase could be interpreted as a threat to people outside the church, along the lines of “Adopt Orthodoxy or die!”

A devout religious conservative, Milonov has a history of using this expression in his political campaigning, and courts have fined at least two opposition activists for sharing photos of Milonov wearing a t-shirt bearing the same slogan. Milonov is considered to be the main architect of St. Petersburg’s ban on so-called “gay propaganda,” which later served as the basis for a similar federal ban. For his critics, Milonov’s efforts to silence gay expression make his defiance in expressing his extreme Christian views especially frustrating.

In November 2016, Dmitry Semenov, a former State Duma candidate for the opposition group Open Russia, was fined 1,000 rubles (about USD $17) for reposting the photos two years earlier. Local police even called Semenov in for questioning. Federal agents supposedly discovered his infraction on a “random sweep of social media,” but activists suspect that the police were looking for any excuse to harass a member of Open Russia.

Five months later, this time with a kafkaesque twist, a Russian court fined another activist for sharing Milonov’s banned slogan, albeit by reposting a photograph of Milonov wearing his t-shirt in December 2013.

The Chuvashia-based activist Dmitry Pankov was acquitted of any wrongdoing, but then, in March 2017, Pankov reposted a news story about his acquittal. The repost also contained the slogan “Orthodoxy or death!” and elicited new charges against Pankov. This time around, a Chuvash court convicted him of spreading extremism, directly contravening the previous verdict.

Responding to Vselensky’s post on Pikabu this weekend, user “Skallpill” claimed that he already complained once to Russia’s Attorney General about Milonov’s status on Vkontakte, which has apparently been in place for some time.

Skallpill also uploaded photos of a letter he says he received last December from the St. Petersburg district attorney, where the government claimed that only the Russian version of the phrase “Orthodoxy or death!” has been banned in Russia. In other words, Milonov appears to be using Greek as a loophole to skirt Russia’s ban on this slogan.

According to the letter, state prosecutors also showed an uncharacteristic willingness to take into consideration Milonov’s motives for using the slogan. “He explained,” the letter states, “that the phrase in Russian has an entirely different meaning to him personally than the one reflected in the [trial] where it was ruled extremist. […] The meaning of the expression for Vitaly Milonov is that ‘without the observance of Orthodox Christian norms and rules, for him there is no living,’ and he did not intend to incite hatred or enmity.”

Enraged by what they describe as preferential treatment by Russian law enforcement, Pikabu users have vowed to take the matter to Vkontakte, hoping to get Milonov's account suspended for spreading “extremist materials.” According to TJournal, staff at Vkontakte are still investigating the issue.