‘Children Were Dying Everywhere': A Syrian Videographer Recounts the Al Rashideen Explosion That Killed Over 100 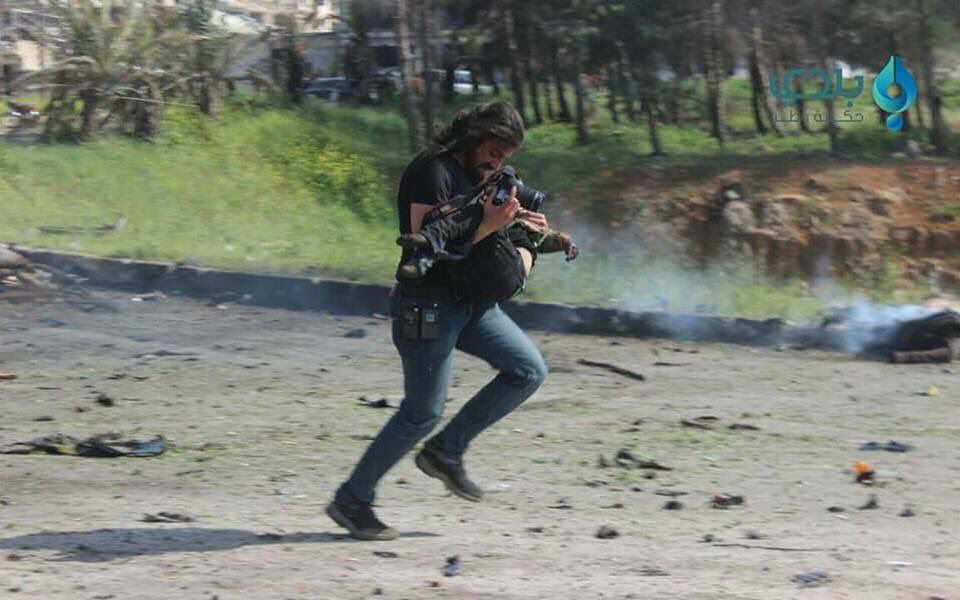 This photo of Syrian journalist Abd Alkader Habak trying to rescue a child from Fua has become iconic. Habak spoke to Global Voices about what happened. Photo used with permission.

On April 15 at approximately 15:30 local time, a huge blast hit a convoy of coaches in Syria's rebel-held Al Rashideen that were carrying evacuees from the besieged regime-held towns of Fua and Kefraya.

A suicide bomber driving a (reportedly blue) van supposedly carrying aid supplies blew himself up near the convoy, according to a number of reports. Over 100 people were killed in the massacre, according to the White Helmets, the civil defense group operating in rebel-held areas.

SCD teams were able to recover 100+ dead bodies & attended to 55 injured after a car bomb targeted the displaced exchange point in Rashdien pic.twitter.com/t3dynqSnwB

Most of the victims were from Fua and Kefraya, including 68 children, according to the Syrian Observatory for Human Rights (SOHR). Among the victims were also between six and nine people from the city of Zabadani and one person from the city of Madaya who came to welcome their relatives on the buses. A number of rebels guarding the convoy were also reportedly killed.

Among the many people who tried to take the injured to safety was Abd Alkader Habak. Habak is a 23-year-old videographer from Idlib who spent four years in Eastern Aleppo and witnessed the brutal siege by the Assad regime that finally lead to the fall of Aleppo in December 2016.

He told Global Voices he had gone to Al Rashideen to document the evacuation. He and his colleagues, other media activists and journalists, had been waiting in Al Rashideen for two days before the convoy arrived.

But Habak then found himself amidst a scene of mass murder. His attempt to rescue a child from Fua was widely shared on social media. Ahmad Al Khatib, a journalist from Aleppo, republished the photos with the following message:

Our humanity and our revolution are bigger and stronger than the terror of #Assad bigger than his crimes.. stronger than your hatred pic.twitter.com/X1QGV07Utj

In an interview, Habak described the moment of the explosion (via voice notes – translation by the author):

One of the groups was distributing chips and sweets to the children. I was nearby, taking photos. I went to say hi to a colleague who was on the other side of the road when it happened. I don't remember what I felt at first but I found myself flying and then falling hard on the ground. I didn't know what was happening or what to do. Was it the regime? But then I remembered that it was not possible. We were used to the regime's airstrikes but we heard no planes above us.

I then stood up and picked up my camera. I ran around and found my camera on the ground. I then saw a child, or what looked like a child, and I ran towards him to try and remove him from here. I tried to take photos but it was very hard. Civilians from Fua and Kefraya that survived got out of their buses and started running as fast as they could. I saw about 30 Tahrir Al Sham militants as well as from Ahrar Al Sham killed and it was Ahrar Al Sham that was responsible for the security of the convoy. It was a very difficult scene. Children were dying everywhere. I saw members of the Syrian Arab Red Crescent fleeing the scene and didn't come back until it was too late.

So me and my colleagues told ourselves that we had no other choice but to remove our cameras and to help the people ourselves. We started helping children. Every injured we saw we'd help them get to safety. People that we thought weren't in immediate danger we would leave them and go to those we thought were about to die. The majority of the injured I saw were children because the explosion happened right next to the group that was distributing chips and sweets.

It was very difficult to watch. We would remove the injured but couldn't do much before the ambulances arrived. Civil society groups sent ambulances and they took a while to arrive. One harrowing scene I saw was a child on the floor with his face covered, so I ran to him but someone else stopped me and told me that the child is dead. I go anyway and see that the child is breathing but with great difficulty. I take the child and I run to the first ambulance I see, I put him in the car and told the driver to go immediately. The child was dying but held my hand and didn't let go. It was very difficult. I can't describe it.

Habak was also interviewed by the UK's Channel 4 which featured footage he took:

That's what happened and that's what I saw with my own eyes. https://t.co/rXBdxjjh3P

At the time of writing, no one had claimed responsibility for the attack. Two rebel groups, Ahrar Al Sham and Sham Legion, have pointed the finger at the Assad government, which in turn blamed “a terrorist driving a car blew himself up”, according to pro-regime outlet Damascus Now. Pro-rebel outlet Arabi 21 also reported that it was someone driving a car and blamed the regime of being behind the violence.

Ahrar Al Sham has announced an “investigation” and their willingness to “work together with any independent international party”, according to Muhammad Abu Zeid, the group's official spokesperson. Meanwhile, ISIS channels have reportedly celebrated the attack.

As many pro-opposition journalists were on the scene, images and videos of the massacre were quickly uploaded and shared on social media, prompting widespread outrage across political lines, with some even comparing it to the chemical attack in rebel-held Khan Sheikhoun on April 4, 2017. Evidence points to the Assad regime as being behind that attack, which allegedly was the 175th of its kind since 2011.

Leila Al Shami, co-author of “Burning Country: Syrians in Revolution and War” and a Global Voices contributor, observed after news of the explosion broke:

Others chose to share images of Syrians, both civilians and rebels, attempting to rescue the injured:

White helmets and Syrian Arab Red Crescent working side by side after the horrendous attack pic.twitter.com/iIjI9wZi9K

Opposition Member (Human) who Run to help woman from #Kafria, he didn't say she's Shia let her died
he Runs to Help as if she was his mother pic.twitter.com/DYC8zFCRxR

Another media activist (Terrorist in the world eyes) Runs to save some children's who got injured because of the #Assad car bomb .. pic.twitter.com/q6qHzaAHRt

Opposition Media activist Run with Injured child by the #Assad car bomb West #Aleppo today
Who killed children's in Khan Shikhon he did this pic.twitter.com/bYbEmV1skM

Some of the injured were treated in a field hospital in rebel-held Idlib, as this report by Qasioun News Agency shows:

The evacuation was part of the Iran and Qatar-brokered “Four Towns” agreement, which was meant to alleviate suffering in four besieged towns: Fua and Kefraya besieged by rebels, and Madaya and Zabani near Damascus besieged by pro-regime forces.

At the end of March 2017, non-profit journalism organization Syria Direct reported on some of the details of the agreement:

Under this week’s deal, reportedly brokered by Qatar and Iran, all of the roughly 20,000 residents of Shiite-majority al-Fuaa and Kufraya in Idlib province would be evacuated from the rebel-blockaded, bombarded towns over a 60-day period beginning on April 4.

In exchange, fighters, their families and any residents choosing to leave the regime-blockaded Outer Damascus towns of Zabadani and Madaya, home to a combined 40,000 people, would be permitted to do so.

Notably, it seems that neither the United Nations nor the Assad regime played a major role in the negotiations. However, the agreement was highly controversial from the start, due to its nature (a swap of civilians along ideological or religious lines) and the recent history of Syria (in March 2017, the UN Commission of Inquiry on Syria described a different deal between rebels and the regime, which led to the evacuation of the remaining population in besieged East Aleppo, as a war crime of forced displacement).

Needless to say, the massacre in Al Rashideen threatened the “Four Towns” agreement. Shortly after the explosion, civilians from Madaya waiting to be evacuated released the following statement declaring their condemnation of the massacre as well as expressing concern for their own safety:

We, civilians of Madaya, who are stuck at the Ramouseh checkpoint under the control of the Assad regime in Aleppo, inside the buses that will forcibly displace us from Madaya in the countryside of Damascus to the city of Idlib in northern Syria, condemn the bombing that targeted the people of Fua in the Al-Rashedin area.

We appeal to the United Nations, the International Red Cross, and the relevant international organizations to provide the necessary protection for us to reach our final destination in Idlib after the explosion in the Al-Rashidin area.

We hold the sponsors of the agreement between the four cities accountable for our safety, especially after the outrage in the Shiite towns surrounding us, as well as by regime forces.

We confirm that we have been awaiting the completion of the procedures for more than 15 hours, after an 18-hour journey, under poor humanitarian conditions.

#Madaya
The displaced from Madaya arrived to Idlib pic.twitter.com/uP0iqKzLxc

After deadly attack earlier, remaining deportees from Fuah & Kefraya buses have made it to their destination: the #Aleppo Jibreen IDP center pic.twitter.com/KVIVASYKVr