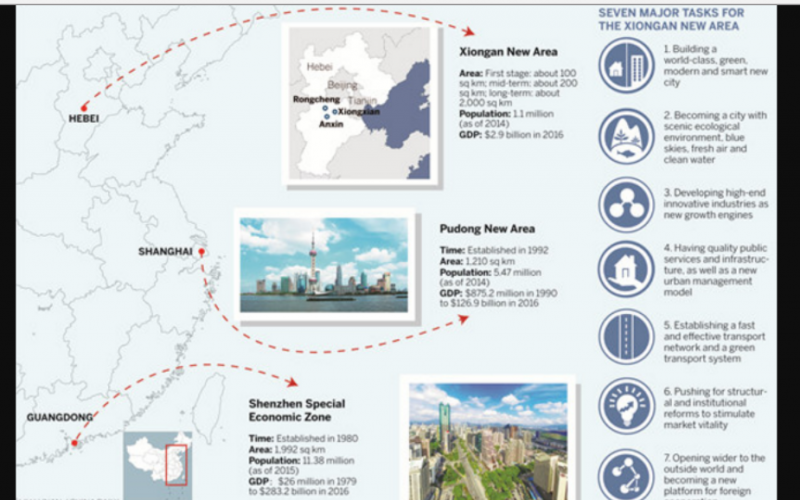 After the initial frenzy in property and stock markets as a response to China’s announcement of a new economic zone near Beijing earlier this month, concerns and doubts over President Xi Jinping's bold initiative have begun to surface.

China announced it would establish the Xiongan New Area, “a strategy crucial for a millennium”, in the underdeveloped Hebei Province that is part of China's arid north, in a bid to advance the coordinated development of the Beijing-Tianjin-Hebei region.

The decision — which is expected to ease demographic and economic pressures on the heaving 22-million city of Beijing — is being billed as having the same national significance as the Shenzhen Special Economic Zone and the Shanghai Pudong New Area in south China, according to a circular issued by the Communist Party Central Committee and the State Council.

Specifically, the plan should reduce traffic congestion and air pollution in notoriously smoggy Beijing and prompt a relocation of industry, while curbing population growth and soaring housing prices in the capital.

Shortly after the announcement, Xiong, Rongcheng and Anxin — the three under developed counties 130 kilometres south of Beijing selected as the site of the new economic zone — were transformed overnight into property investment hot cakes, even as authorities attempted to tamp down speculation by rolling out purchasing restrictions.

The investment frenzy has extended to the stock market, where more than 40 Shanghai, Shenzhen and Hong Kong-listed companies related to the new area, primarily developers as well as steel and cement factories, surged in the past week.

But given that many of China’s recent experiments in building new economic zones have failed, what makes Xi's Xiongan plan any different?

The most notorious failure in the last decade is the Caofeidian New Area, an island 230 kilometres east of Beijing, which had been planned around the relocation of Capital Steel, one of China’s largest state steel firms, from Beijing. Once touted as a future hub for heavy industry, it now resembles a ghost town low on meaningful investments.

In Tianjin, a municipality 130 kilometres southeast of Beijing, the authorities promised to build the world’s biggest financial center, Binhai New Area. Binhai first emerged as a project in the 1990s but never blossomed as planned.

Despite the market frenzy, financial analysts have been more sober in their analysis of Xiangan's potential.

Liao Qun, chief economist at China Citic Bank International said that coastal areas tend to grow faster. Merrill Lynch's research predicted that the new area would not herald another round of massive infrastructure investment in China. Nomura analysts estimated that direct incremental annual infrastructure and property investment there could be around 500 billion yuan ($72.5 billion) in the next five years, translating to just 0.3-0.6 percent of GDP.

Some Chinese economists and researchers have also been worried about the new area’s future as economic and political reforms move along sluggishly.

[Conditions for the sustainable growth of a new area] It is easy to set up new area, but tough to sustain its growth. Here are some of the necessary conditions for the new areas to sustain growth: 1. Ability to produce and energize a batch of competitive companies; 2. Ability to aggregate a large number of innovative entrepreneurs; 3. A system to boost social innovation; 4. Should not be dependent on national policy favors beyond the start up period; 5. Should treasure resources and environment during development.

If the idea of “special” in special development area does not transgress the pre-existing system, it can't be really special. If it does not transgress our imagination, Xiongan New Area will just be another hype-driven concept. The success of Shenzhen Economic Zone did not depend on property developers, but a large number of rebels who wanted to change the [centrally planned] system. In Hebei, where people believe in the planned economy, how can they attract and embrace alternative [people] who go against the establishment?

Ordinary Weibo users also cast doubts on the development of the new area, under the Weibo Headline News’ comment threads:

Less hype and more serious development of industry, otherwise the idea of catch up with Shenzhen and Shanghai will remain a joke. How can [Xiongan] be successful when it begins with property speculation in an area that is backwards in terms of culture, ideology and business environment？