Some of Ghana's Media Houses Are Social Media Stars, While Others Take a Pass 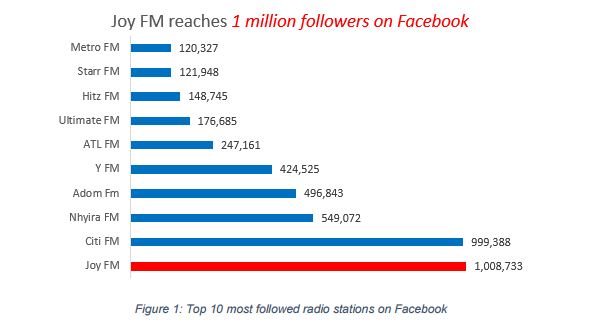 A screenshot of a figure showing 10 most followed radio stations on Facebook.

Penplusbytes has released its 1st Quarter Social Media Index report for 2017, which reviews the outlook and performance of newspapers, radio and TV stations in Ghana based on their presence, followers and likes on Facebook and Twitter.

To compile the index, the organisation says it conducts a survey of 60 newspapers, 350 registered radio stations and 34 TV stations. The report shows that Facebook is the most popular social media platform among media houses in Ghana than Twitter.

The report reveals that only 68 (19.4%) of the 350 radio stations own and run Facebook accounts. Joy FM, one of Ghana's most influential media houses, is the most followed Ghanaian radio station on Facebook with over 1,008,733 likes, followed by Citi FM with 999,388 likes.

The report shows that 19 (31%) out of 60 newspapers in Ghana are on Facebook. However, some of these pages show no updates or interaction in as long as three years. The Daily Graphic, the most read newspaper in Ghana, leads with 846,449 followers, followed by 90 Minutes Sports in second with 131,778 page likes.

The study found about 55 (16%) Ghanaian radio stations with Twitter handles. Joy FM leads on Twitter with 640,984 followers, followed by Citi FM with 541,150 followers.

The Social Media Index states that:

This report reveals notably impressive performances by media entities such as Joy FM, Citi FM, Starr FM and ATL FM who, without any surprise, have some of their accounts verified. They represent a small percentage of best managed pages that are easily identified as official on social media with up-to-the-minute post updates and interaction with audience.

The reverse of this is also the general lack interest by many other news media with poorly managed handles that are difficult to identify as official accounts. Most of these traditional media have multiple pages created in their names with some appearing to have been last updated as far back as 2013 as found with a 2nd Ghanaian Times newspaper page on Twitter (@GhanaianTimes).