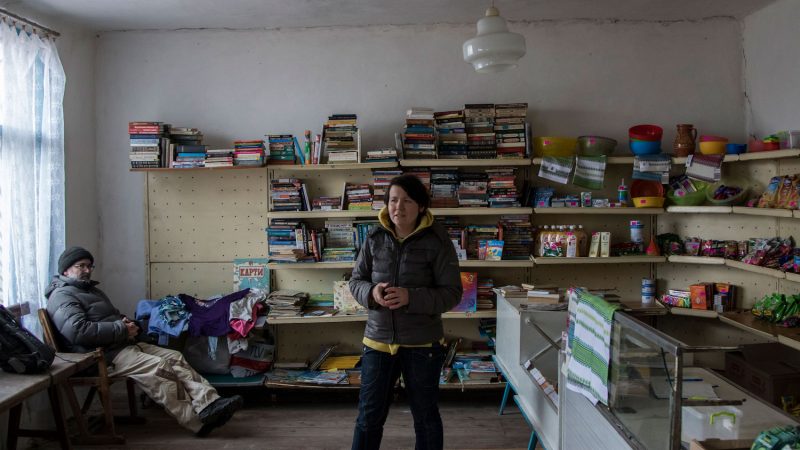 Orest and Oksana Oliinyk in their shop in Khrystanivka. Source: Ethan Daish and Elisabeth Lima

“I don’t really like Europe. In Europe, 99 percent of things are finished; here, there is work to be done,” says Oksana Oliinyk, standing in the small Soviet-era shop she and her husband Orest have just opened in the village of Khrystanivka in east-central Ukraine. Behind her are five rows of shelves she’s populating with books—the building blocks of the village’s first library.

“A man came to the shop today and saw them, and I told him they are free to take away,” she says. “He told me he doesn’t have time to read because he works. I asked him: ‘Don’t you sit and watch TV in the evenings?’ He said: ‘Yes, of course’.”

Below raised eyebrows, a closed smile emerges. She knows she has her work cut out for her. 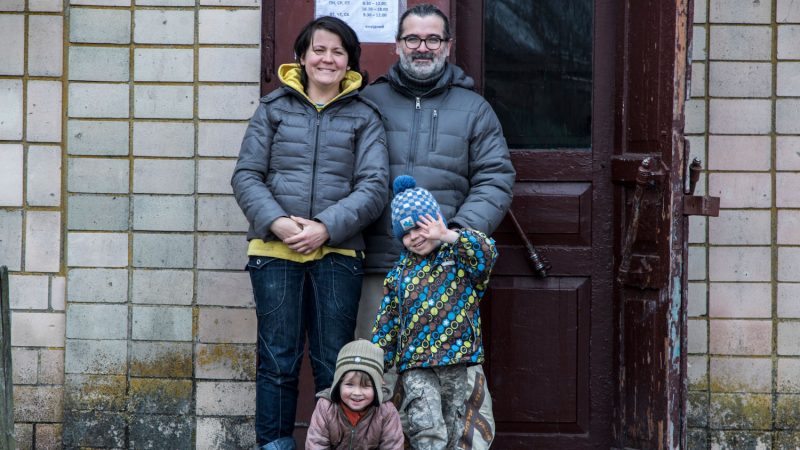 The Oliinyk family outside their shop in Khrystanivka. Source: Ethan Daish and Elisabeth Lima

Oksana calls herself a social activist, but to Khrystanivka, she’s more than that. Originally from Kiev, she and Orest moved to the village four years ago, resolving to revitalize the community while they raise their two young boys.

In Kiev, Oksana worked with NGOs and charged herself with resolving issues on a global scale, making Khrystanivka an unlikely destination for her and her family: roughly 100 people live in Khrystanivka, which is situated on a hill above the Sula River 140 miles east of Kiev. Like many other Ukrainian villages, Khrystanivka is physically and culturally isolated, removed from the country’s modern cities: It takes more than three hours on heavily potholed roads to reach Khrystanivka by minibus.

Oksana decided to move to Khrystanivka out of a belief that long-term change must begin at the local level. She wants to spark this change in Ukraine’s villages, modernizing and integrating the country’s vast rural areas. 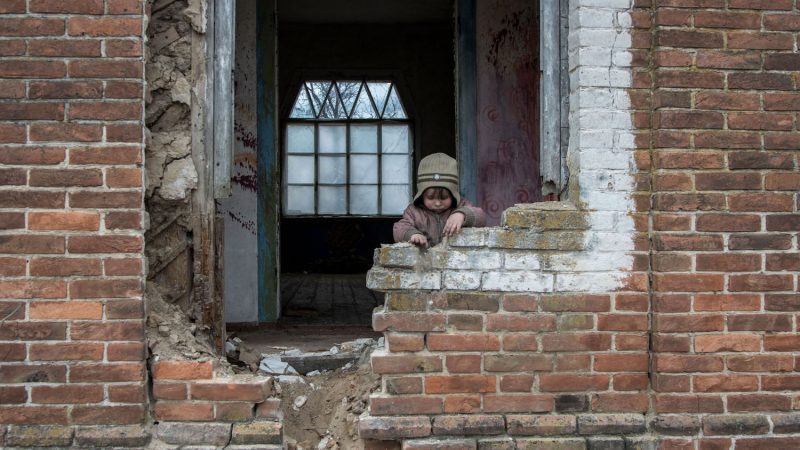 Ulas, one of the Oliinyk's  two sons, in Khrystanivka's old school, which closed its doors in 2001. Source: Ethan Daish and Elissa Lima

One thing that might bring increased opportunity to those living in Ukraine’s rural areas is greater access to the Internet. Access is already improving: between 2012 and 2015 the number of Internet users across the country doubled from 21 percent to 45 percent, and last year Internet penetration reached 60 percent nationally.

To accelerate this process in Khrystanivka, Oksana wants her shop and library to become a community center, complete with computers and Internet access for the village’s residents. 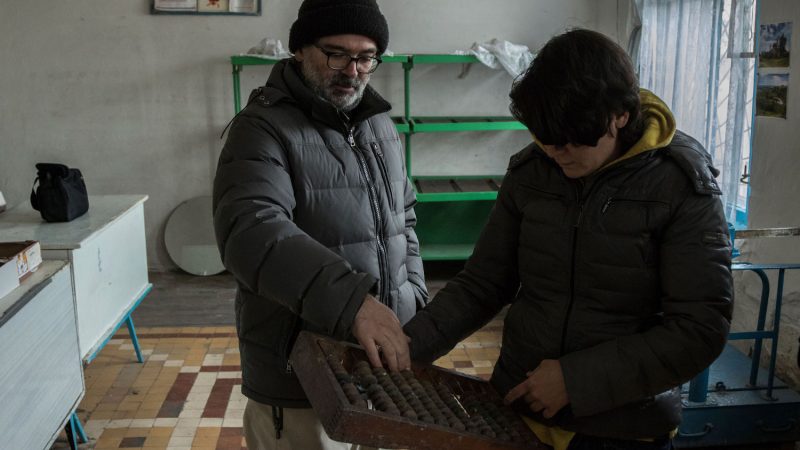 “Most of them don’t have access to the Internet and don’t speak much to their families that live in cities or abroad,” she told RuNet Echo. “We really need a few computers and a free Wi-Fi zone to start with…a place to get information about what’s going on in the region. People here don’t have any common ideas or projects. They could have more business ideas or get freelance jobs through the Internet and grow more effectively.”

In Lokhvytsya, a town of 12,000 people a few miles north of Khrystanivka, a community library recently opened a computer room where people can use the Internet for free. In a room just down the corridor, Oksana holds English small classes on Tuesday and Thursday evenings. 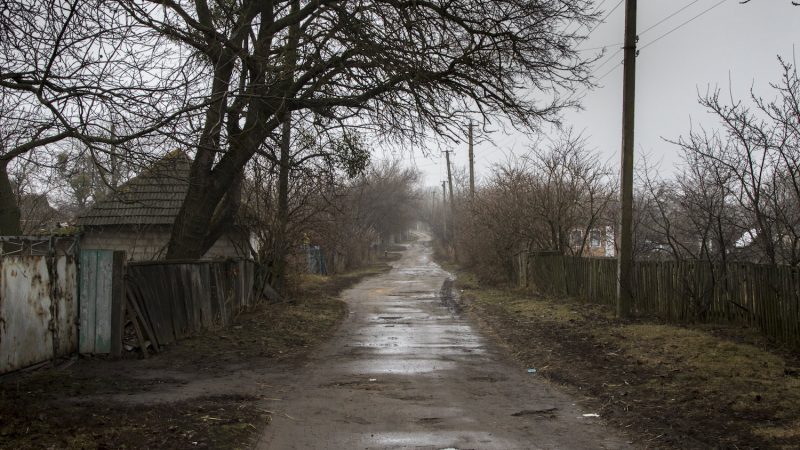 A road in Khrystanivka. Source: Ethan Daish and Elisabeth Lima

Like access to the Internet, Oksana believes schooling is critical to opening doors for youth in Ukraine, where the state educational system is lagging. Ukraine ranked 94th of 138 nations in the 2016-17 Global Competitiveness Report in teacher training level—31st out of the European nations in the study. These problems are particularly acute in rural areas, where, Oksana says, “In some schools, the English teachers cannot actually speak English.” As Ukraine’s population urbanizes and villages disappear, rural schools are drying up.

Still, Oksana thinks Ukraine could have a bright future: “Good education can save this country,” she says. 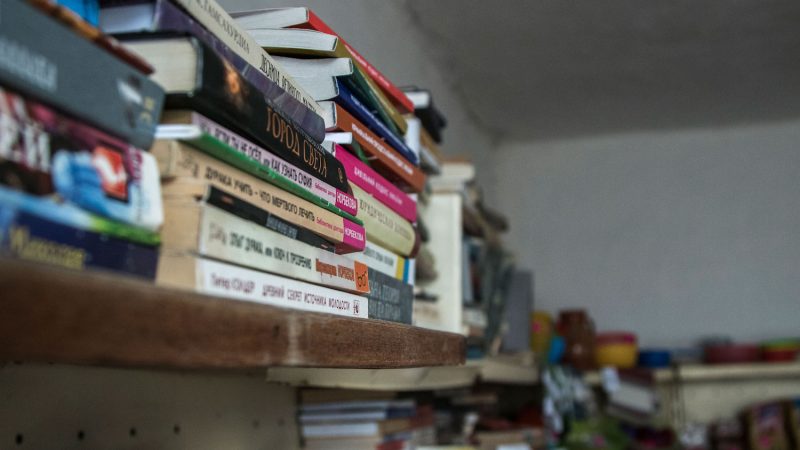 Back at the shop, a short walk up the village’s main road, more books are appearing on the shelves, as well as an increasing variety of products. Ever hopeful, Oksana is only interested in moving Khrystanivka forward.

“The more people are involved in change, looking for better education and experience, the more people will understand that they can influence the process,” she says. “It’s not the good king or the president that you should wait for to come and save you. We are the kings of our environment.”