Russian Journalists Say One of NYT's Pulitzer-Winning Stories Was Stolen 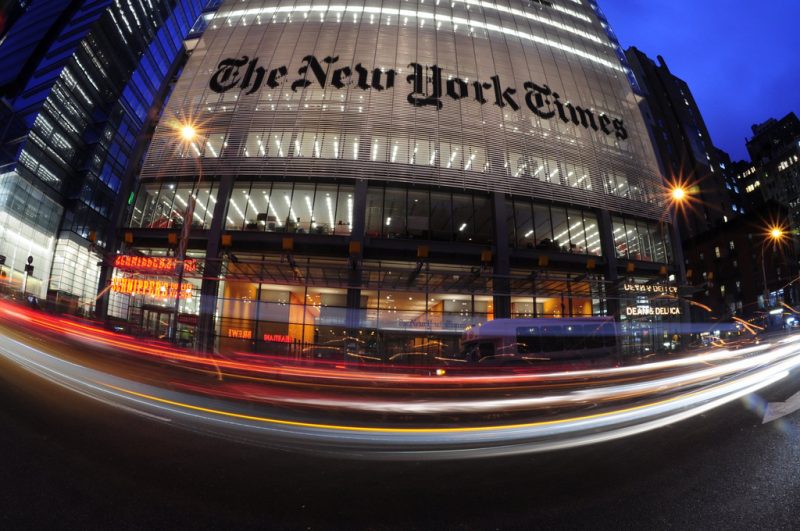 This week, The New York Times was awarded the 2017 Pulitzer Prize in international reporting for ten articles about “Vladimir Putin’s efforts to project Russia’s power abroad.” Ivan Kolpakov, the chief editor of Meduza, an independent Russian news site, says one of those articles was stolen from his newsroom.

Meduza first raised its concerns in late December, when The New York Times published an article by Andrew Kramer, titled “How Russia Recruited Elite Hackers for Its Cyberwar.”

According to Meduza editor Aleksandr Gorbachev, Kramer’s story retells two investigative reports by Meduza’s star correspondent Daniil Turovsky: an article in September 2015 about Russian state corporations hiring outside firms to launch distributed denial of service attacks, and a story in November 2016 about how the Russian state recruits hackers.

The same day, Turovsky echoed this complaint, writing, “And so I debuted today on the front page of The New York Times. Actually, a reporter for the newspaper completely retold two stories that came out in Meduza a month and a half ago and a year and a half ago.”

Daniil, I spoke with you while preparing this article and explained that I intended to follow in the footsteps of your fine work, that I would credit Meduza, as I did, and thanked you for your help. I disagree with your assessment that the article “in whole” retold two Meduza articles. Our story included reporting not in the Meduza articles, in particular concerning prison recruitment. Specifically and importantly our article explicitly said that Meduza “first disclosed the recruitment effort” and included a link.

The scandal seemed to end there, until this Monday, when Kramer’s story was included among The New York Times’ Pulitzer-Prize-winning reporting.

The next day, Kolpakov announced that Meduza would hire an outside expert to analyze Turovsky’s work and Kramer’s story, to determine if anything was copied or misrepresented. If Meduza’s suspicions are confirmed, Kolpakov says he is prepared to take the matter to the Pulitzer Prize Board.

“I don’t want anyone to lose their prize, but I would be comfortable if this text [Kramer’s] were removed from the list of winning work,” Kolpakov explained on Facebook.

Aside from general complaints that The New York Times failed to give due credit to Meduza for breaking the story covered in “How Russia Recruited Elite Hackers for Its Cyberwar,” Kolpakov says Kramer appears to have translated into English comments computer programer Aleksandr Vyarya made to Turovsky in his report.

“We happen to know from the main source [Aleksandr Vyarya] that he didn’t really want to talk to the NYT,” Kolpakov says. “And most likely Kramer didn’t manage to get the quotes he needed. Also, it’s hard to imagine a person who talks to journalists in identical phrases.”

I spoke with our bureau chief, Neil McFarquhar, who I believe you also reached out to. Neil tells me that your reporter, Mr. Turovsky, was immensely generous in helping to steer Andrew in the right direction. The story does note the recruiting effort was first reported by Meduza and it provides a link to the article.

The story and quotes, however, are all the result of original reporting, completed either in person, by phone or email. Nothing was simply lifted from Meduza, though I understand why you raised the concern.

Andrew is a long time, trusted correspondent who has always demonstrated a commitment to the highest ethical standards and I am certain he has here, as well.

Kolpakov says he was also told by Neil MacFarquhar, The New York Times’ Moscow bureau chief, that Kramer had to fight to keep the small reference to Meduza that did make it into his story’s final draft. “In fact,” MacFarquhar informed him, “in the initial edit done in New York, the paragraph crediting Meduza had been excised for space, and Andrew insisted that it be restored.”

Commenting on Kolpakov’s Facebook post, Ivan Nechepurenko, a Moscow correspondent for The New York Times, advised Meduza to appeal to Liz Spayd, the editor who manages the paper’s issues of journalistic integrity and news judgment.

This time, Kramer stayed away from Facebook, but he sent along the following message through Russian columnist Oleg Kashin:

In fact, I was in contact with Vyarya directly. I verified and discussed elements of his story. And he gave me a quote that was similar to and slightly different from what he told Meduza.

Kolpakov says the outside expert will speak to Vyarya to confirm Kramer’s claims, but Meduza’s newsroom remains unconvinced. Commenting online, Daniil Turovsky said he’d already asked Vyarya about his contact with Kramer. “Is he for real? I politely sent him packing for now,” Vyarya apparently told him.