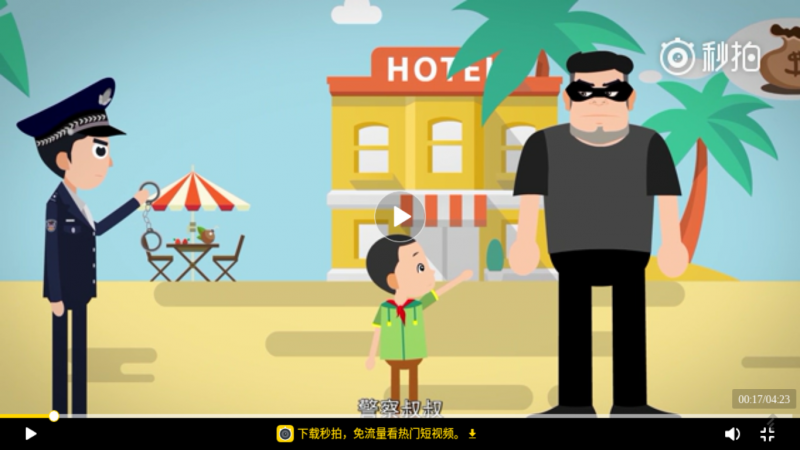 China's National Security Bureau released a video warning people not to be lured by spies. Screenshot.

A national hotline, #12339, has been available for citizens to report suspected espionage since November 2015. But starting on April 15, under the newly introduced “Measures on Rewards for Citizens Reporting Leads on Espionage Conduct”, citizens will be given up to 500,000 yuan, or about 73,000 US dollars, if their reports are useful.

According to an article in Beijing Morning Post, the reward system is meant to build an “anti-spy iron wall“:

As a result of the open-door policy in our country being expanded, interaction with foreigners has increased rapidly. The number of people entering and exiting the country has escalated. Foreign intelligence agencies and other hostile forces have been penetrating our country’s politics, inciting separation and subversion, stealing secrets and committing espionage activities.

Against such a backdrop, there is a pressing need for anti-spy investigations to take an innovative approach by mobilizing the masses, making people aware and giving them the motivation to protect national security and to eventually build an anti-spy iron wall.

The new measure stresses that the identity of those forwarding along tips would be keep anonymous and ill-intended reports would be subjected to a fine.

The National Security Bureau also released a video via various outlets instructing citizens on what to be on guard for and explaining the details of the reward system. The video hosted on China Central Television’s social media account on Miaopai attracted more than 450 million views in one day.

Propaganda officials began advising the Beijing public to be on the lookout for foreign spies last year. One of the cartoon posters they released, titled “Dangerous Love,” warns Chinese women against being seduced by foreign men who have undercover motives.

According to the counter-espionage law passed in 2014 and the foreign NGO management law passed in 2016, it can be considered an act of espionage to work for organizations that receive foreign funding without the prior approval of the government.

In the past two years, a number of foreigners have been arrested for “posing a threat” to national security. In January 2016, Peter Dahlin, a Swedish human rights activist, was expelled from China after 23 days in detention. The more recent cases are the arrest of Taiwanese human right activist, Lee Ming-cheh, and the detention of Australian-based Chinese professor Feng Chongyi.

The China Youth Communist League was among those on popular social media platform Weibo that cheered the reward system, doing so with a rap song. The league's followers on Weibo reacted to the video by pointing at liberal public opinion leaders’ negative comments about China as an act of espionage. Below are some of the most liked comments on the video thread:

“Non-white monk”: There are at least tens of thousands [of spies] on Weibo. Japan, the US and Korea, they use all sort of premises to buy them off so that they lead the choir insulting national heroes, and inciting regional, ethnic and employment discrimination. They also make use of news incidents to create rumors and confuse people in order to paint a chaotic image of the country. They are active behind all this.

“Watching rain at dawn”: actual spies are not necessarily those who are spying. They can be those who circulate negative energy with a sense of righteousness, those who incite extreme acts by revealing the truth.

Some supporters of the Youth League started naming public intellectuals as spies in the comments section:

“Mandarin zhoutou 12345″: I here reported Wang Xuming, the director of Language and Culture Press under the Education Bureau; Yuan Tengfei [a history teacher and a famous blogger]; He Weifang [a law professor]; and Mao Yushi [a prominent economist] as American spies.

“Su-ma-li-qing rua”: Yuan Tengfei and the so-called public intellectuals, they keep mocking the country and the government and keep praising western democracy and Taiwan's experience as the right path. How to report this?

In another news discussion thread on Weibo, voices were more critical:

Still have time to talk about spies. Focus on corruption first or the country will be following the path of the Qing Dynasty. If you don’t fix your own house, it will collapse on itself.

Read the comments. The Cultural Revolution began with reporting and hurting each others.

If talking about one’s opinion on Weibo deserves arrest, how many people will end up in jail? Free speech is bad? What kind of people would like to jail those who have different opinions other than their own?