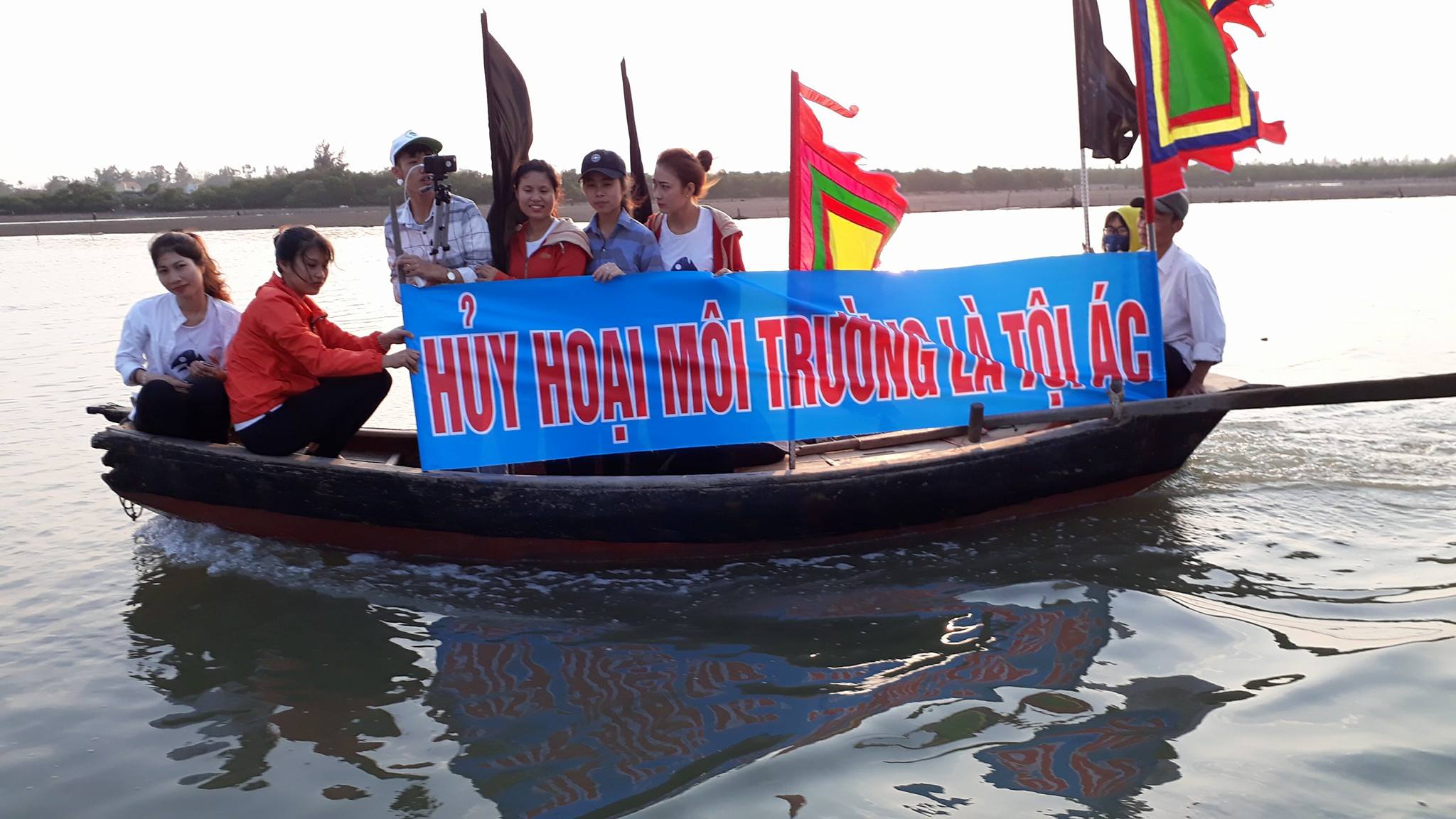 Protests on the waters with a banner saying “Destroying the environment is a crime”. Source: Facebook page of Cọt's Hiếu

This article by Đôn Lê is from Loa, a news website and online radio project of Viet Tan that broadcasts stories about Vietnam. It is republished by Global Voices as part of a content-sharing agreement.

Thousands of Vietnamese took to beaches and boats in various towns in central Vietnam and to social media during the first week of April 2017 to protest against a Taiwanese-owned steel plant, one year after its toxic spill caused a massive fish kill and left lingering damage.

Protesters blame the Formosa Hà Tĩnh Steel Plant as well as the Vietnamese government for what is being considered Vietnam’s worst environmental disaster.

The toxic spill resulted in more than 70 tonnes of dead fish and other marine life washing ashore the central coasts of Vietnam. It has also crippled livelihoods across four provinces — Hà Tĩnh, Quảng Bình, Quảng Trị and Thừa Thiên-Huế. The deputy director of the local environment in Quảng Trị told Reuters that some 3,000 boats were affected in that province alone, and many fishermen and their families have had to abandon their boats.

Anger and frustration over the government’s slow response and lack of accountability in holding the steel mill responsible have spread across the country and protests have continued over the past year, despite a US$500 million settlement between Formosa and the Vietnamese government. Fishermen argue that the compensation is inadequate and has not helped the people most affected in the region.

Citizens in the town of Kỳ Anh, where the Formosa steel plant is located, took to the beach wearing white shirts depicting a fish skeleton to mark the anniversary. They waved signs calling for Formosa to end its operations. 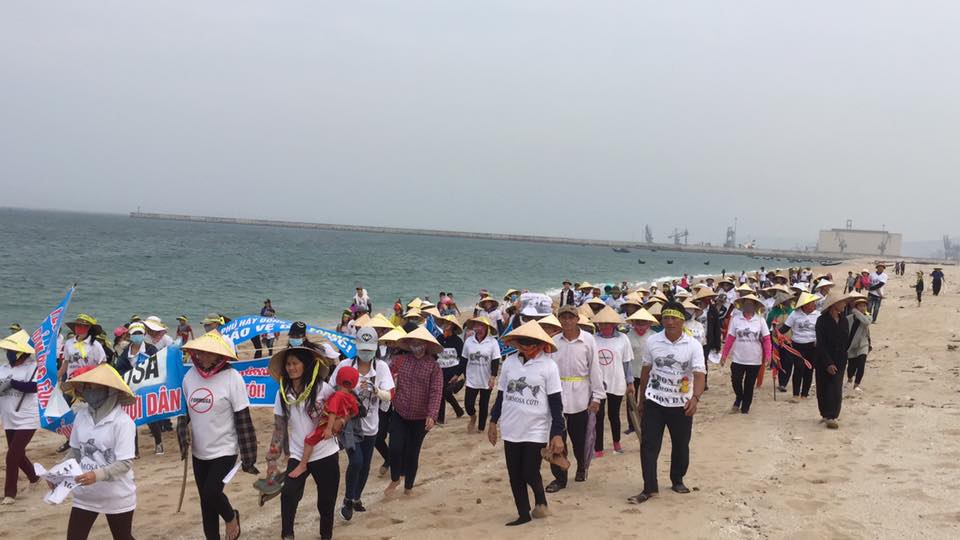 Reverend Trần Đình Lai, one of the Catholic priests leading the protest, said:

Formosa must accept full responsibility and make efforts in returning the clean environment to our country, our people and central Vietnam before leaving Vietnam.

In neighbouring Nghệ An Province, locals took their demonstration to the sea. The fleet of boats brandished black flags with fish skeletons and five-colored heritage flags as they protested on the waters. 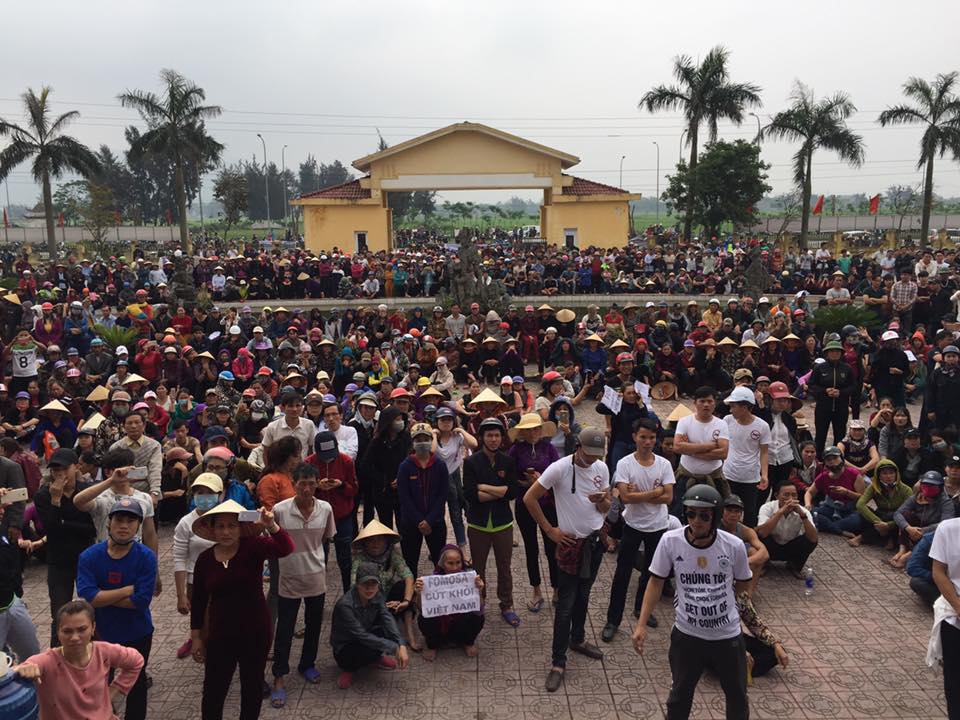 Earlier in the week, fishermen brought out fishing nets and stopped traffic on National Route 1A in Hà Tĩnh Province to demand further compensation.

Meanwhile, Vietnamese netizens launched an online petition urging the international community to speak out against the environmental disaster. The petition quoted prominent figures in the religious and activist community who are calling for a proper resolution to the Formosa disaster. Within less than two weeks of launching, the petition garnered over 100,000 signatures.

An excerpt of the petition appeals for international support:

We hope the United Nations, EU, World Bank, Asian Development Bank and international environmental organizations urge the Vietnamese government to take up responsibility to rebuild our environment and the lives of the victims.

People across the country expressed solidarity with victims of the environmental disaster by sharing photos of themselves near the water on Facebook. 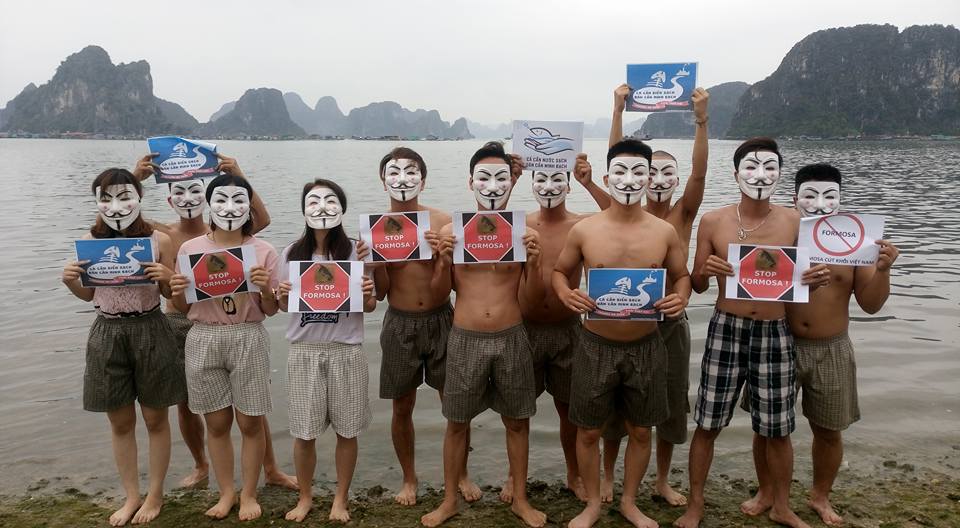 Power at the wrong time, in the hands of the wrong people can ignite waves of rage. (Officials must) become a responsible government, professional, and brave when confronted with the people’s resentment.