Russian Political Astroturf Is Back 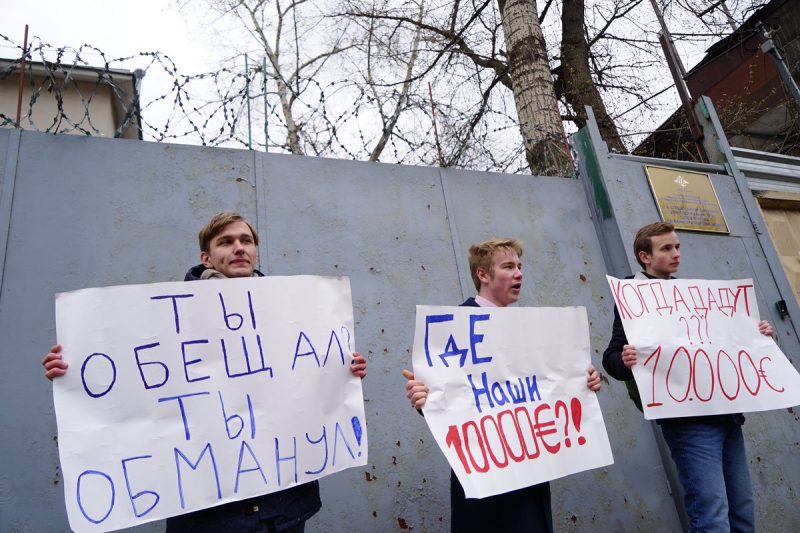 Before Alexey Navalny was released from jail on Monday, a staged “student demonstration” was making headlines to spoil his public return. Navalny, the unofficial leader of Russia’s unofficial political opposition, went free after serving 15 days behind bars for disobeying police officers during a protest in late March.

Outside Navalny’s jail, a small group of young men gathered, holding signs complaining that he had promised them 10,000 euros and never delivered. “You promised? You deceived!” said one poster. “When do we get the 10,000 euros???” another man’s sign read. After letting them pose for some photos, officers soon escorted the men into a police van.

The posters referred to “RosEvroSud” (Russian Euro Court), a project Navalny launched to facilitate appeals to the European Court of Human Rights (ECHR). Ahead of surprisingly well-attended nationwide protests on March 26, Navalny told demonstrators that his team would make RosEvroSud available to anyone unlawfully detained and fined during the rallies that weekend. In his public appeal, Navalny suggested that each person wrongfully prosecuted could win 10,000 euros in the ECHR.

Ilias Merkuri, a writer and “Anti-Maidan” activist who once trolled Russian oppositionists as a masked character named “Dick Riot,” tweeted photos from outside the jail on Monday, and his images appeared hours later in the Russian media, including in the pro-Kremlin tabloid “Life,” which ran a story with the headline “‘Lyosha, Where’s the Cash?’ Schoolchildren Demand Promised Rewards From Navalny.”

They're waiting with demands for Navalny outside Special Detention Center Number 2.

On Tuesday, journalist Alexander Plushev revealed that at least one of the Navalny protesters — a man named Dmitry Molchanov — is actually a student at the Russian Presidential Academy of National Economy and Public Administration, studying to work in the Internal Tax Service. Plushev even dug up Molchanov’s admission paperwork online.

An anonymous Twitter account based in Tomsk also tracked down Molchanov’s accounts on social media, finding a photograph of his student ID card, showing his registration at the Presidential Academy.

After protesting Navalny on Monday, Molchanov briefly deleted his Vkontakte account. When he restored it, his affiliation with Molodaya Gvardiya — the youth wing of Russia’s ruling political party — had mysteriously vanished.

Staged demonstrations like Molchanov’s attempt to portray Alexey Navalny as a deceiver of young people are not uncommon in Russia. Pro-Kremlin organization members often pose as students and oppositionists or recruit students under false pretenses to appear in public, where they’re photographed by reporters, who then write about the demonstrations as though they were organic displays of grassroots activism.

Just last week, Plushev outed a similar stunt by the Anti-Maidan movement (to which Ilias “Dick Riot” Merkuri has ties), where activists from the group posed as university students at a memorial for the victims of the St. Petersburg subway bombing.

This week, The Moscow Times reported that dozens of students from Moscow State Linguistic University were duped last week into standing in line outside the Russian Supreme Court to see proceedings against Jehovah's Witnesses. Never allowed in the building, the students waited around for nothing, while journalists photographed them, and later reported falsely that droves of menacing Jehovah's Witnesses had surrounded the court.