Are Trinidad & Tobago Police Actively Investigating the President's Housing Allowance Like They Said They Would? 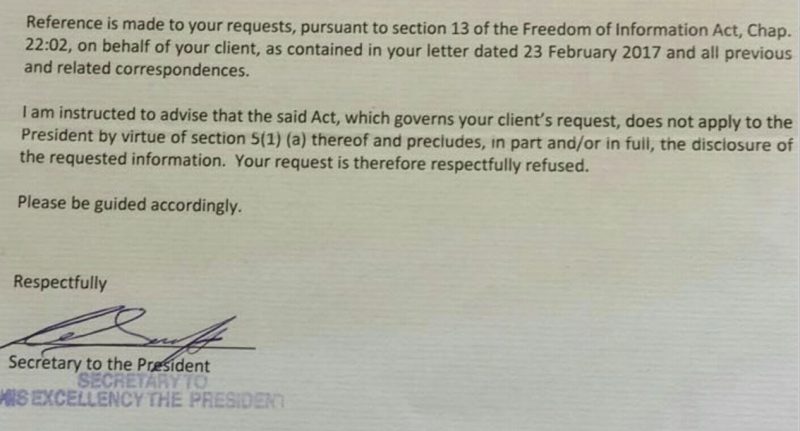 Screenshot of a section of the letter sent to Rhoda Bharath's attorney with regard to a request for information from the Office of the President.

Rhoda Bharath, the university lecturer in Trinidad and Tobago who, back in September 2016, brought the issue of a controversial presidential housing allowance to national attention, has posted a new Facebook Live video to update netizens on the latest developments — or lack thereof.

Social media users in the country have been routinely tuning in to Bharath's updates, and the online conversation has helped to keep the issue of alleged misconduct in public office on the front burner, even when mainstream media and civil society groups appear to not be pushing the matter.

The Trinidad and Tobago Police Service (TTPS) announced on January 15, 2017, that its anti-corruption unit would launch an investigation into President Anthony Carmona's receipt of a monthly housing allowance of TT$28,000 (US$4,182). The president received this money while living in state housing, which is not allowed. Since then, the public has not been advised as to the status of the investigation or any of its findings.

Chief of Police (CoP) Stephen Williams stated in January that at the time the investigation was not a criminal one. In her newest Facebook Live, Bharath quipped that as far as she is aware, “the only thing […] that police investigate in Trinidad and Tobago is crime”. She also reminded social media users that she sought expert and independent legal advice based on the evidence she gathered, noting that the police investigation began “after a Queen's Counsel (QC) insisted that the president needed to be investigated”.

The apparent lack of progress with the investigation has renewed some netizens’ lack of confidence in the police service.

President Carmona has publicly insisted that the Salaries Review Commission (SRC) authorised his receipt of the housing allowance based on a commissioned report. The SRC, however, has since said it gave no such permission.

In her latest Facebook Live video, Bharath honed in on several new areas of concern. On January 11, 2017, there was a Joint Select Committee (JSC) hearing at which members of the Office of the President — including Accounting Officer Gregory Serrette — were present. Bharath, who tuned in to the broadcast hearing, noted that it revealed “a lot of craziness going on with respect to expenditure and hiring […] up to December 2016, two members of the president's household were on the payroll at the Office of the President”. As a result, she is asking President Carmona to clarify whether he has used taxpayers’ dollars to hire family members and even pay for their travel expenses.

Bharath also wants Serrette called to account, alleging that he himself has had at least one family member working at the Office of the President:

We in Trinidad and Tobago like to pretend that nepotism is not a big deal […] in fact, it is against the law. The Integrity in Public Life Act specifically says that you're not meant to use your position in public office to benefit friends and family members.

There's something else on Bharath's radar when it comes to the police investigation — “some sort of link” between the president and Chief of Police Williams — which to her suggests a possible conflict of interest. In 2009, Williams’ wife, Magistrate Avason Quinlan, faced misconduct charges. The matter was investigated by a one-man tribunal comprising “none other than then Justice Carmona”. Quinlan was subsequently vindicated.

In light of that, Bharath said she has “serious questions about whether the investigation will take place in an open, transparent and honest fashion”.

Interesting observation concerning the CoP's wife, I think there are good grounds for the Integrity Commission to get involved but do not hold you breath on that ever happening.

The country's Integrity Commission, for its part, has been besieged by a startling lack of integrity.

On the heels of official correspondence that Bharath's attorney received, which “respectfully refused” to disclose information that Bharath requested based on the fact that section 5. (1) (a) of the country's Freedom of Information Act (FOIA) excludes the president, Bharath made a clear distinction between the president himself and his office:

The Office of the President is run by members of the civil service; they are audited by the auditor general and can be called before parliament to answer questions, which essentially means that they can be asked questions by us.

On the subject of that clause, Facebook user Barbara Jenkins commented:

That can't be correct. If it is the constitution is fatally flawed inviting just what we're witnessing now.

With President Carmona now 11 months away from leaving office and no public updates on the police investigation, Bharath argued that the housing allowance issue “is linked to the larger crime problem in the country”:

If you have a situation where the highest office holder in the land cannot be held accountable, refuses to answer any questions, and the police force who we have to reply on to investigate, solve crime and make people answerable […] if they're not doing their jobs, well…