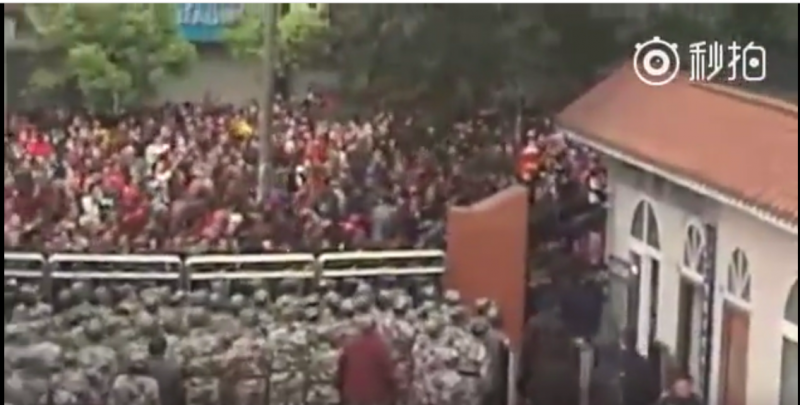 Confrontation outside the school after teenager found dead. Screenshot from youtube.

Chinese social media has been in uproar for a week after a video showing the dead body of a 14-year-old student lying on the ground went viral. The tight-lipped reaction of local authorities, who have cracked down on those discussing the case, has only seemed to feed the fire.

The incident happened on 1 April in Luxian, Luzhou City, Sichuan Province. The student, identified by his surname Zhao, attended Taifu Middle School. Speculation quickly spread about the manner of his death.

The following day, local authorities claimed that there wasn’t any evidence that Zhao’s death was a homicide. And on 3 April, Luxian police arrested four netizens for having “incited the public and severely disturbed public order.”

But many still believed that the boy was a victim of campus violence. The most widely shared theory was that Zhao was beaten to death by five other students for not paying protection dues of 10,000 yuan ($1,450) to a local group of bullies.

The case attracted crowds near the school, demanding that authorities disclose details, including the school’s closed circuit television footage. Below is video showing those gathered:

In response, local authorities blocked roads entering Luxian. A week later, they continue to crack down on “rumors” surrounding the incident and prevent journalists from interviewing students, school officials and the victim’s family, at the same time as refusing to provide the public any evidence that Zhao’s death was indeed an accident.

On 4 April, reporters took the village route for 20 kilometers to avoid the road block and interview the victim’s grandparents and classmates. But they were tailed by the village officials who intervened in our interviews with all kinds of threats. All the interviewees refused to talk. Reporters also received excessive telephone harassment.

[The authorities] have not even conducted the autopsy. How could they rule out homicide? Now you asked us to wait, so full of contradictions!

Falling to death is the consequence, how can it be used to rule out a homicide? The fall can be caused by outside forces. If it is suicide, where is the suicide note? If the case involves school bullies, shouldn’t the police officers interrogate them? How can they conclude the case so quickly without addressing people’s concern?

The hardhanded reaction of local authorities has made people more and more skeptical. A Weibo user expressed his frustration:

Psychology professor Tang Yinhong wrote on WeChat what happened in Luxian as a “Tacitus Trap” (original post deleted. Copy of the post backup by Letscorp, a Chinese bridge blog):

To prove netizens’ version of the story wrong is not difficult. Authorities just need to release more information and the rumors would fall apart… However, authorities did not do so and as usual, they took the stability maintenance approach and created conflicts between the government and people… Once they started to control information and stopped people from talking, people’s speculations erupted. Even if authorities were telling the truth, people would not buy it. Such a situation is called “Tacitus Trap” in political science. “If authorities lose their credibility, no matter what they say or do, society would react negatively”. [A quote from a speech by Chinese President Xi Jinping].

Chinese authorities has led the way to a post-truth era, Tang argued:

The so-called rumors quite often are not spread with ill intentions. People just add on to the original story when distributing the information. And eventually the rumors become harmful. In some cases, people choose to participate in circulating ill-intended rumors because they sincerely believe that they are true. Their judgement and perception are based on their own experience.

Unfortunately, as long as the security maintenance mode has been turned on to repress public opinion and eliminate “rumors,” it is difficult for the “truth” to take root in people’s hearts. That’s why I cannot talk about the incident according to what is true or not. I don’t think public opinion has solid ground; but I cannot persuade people into believing the official version (actually I can’t even make the judgement). From my point of view, if the information from one side is under control or blocked, it is necessary to be cautious and question the other side of the story.

Hence, my suggestion is, we have to adapt to the situation when “truth” is being placed in a bracket. Your judgement will be built upon your standpoint, experience and values and is not necessarily based on fact.

China lacks a free press and the right to free association, while the government's propaganda machine and censorship efforts are omnipresent. In a “post-truth” environment like this, the media and civil society are prevented from promoting the truth, unlike the situation in some Western countries at the moment. That leaves people with the accepting the official version or sticking to beliefs that perhaps don't stand on solid factual ground.