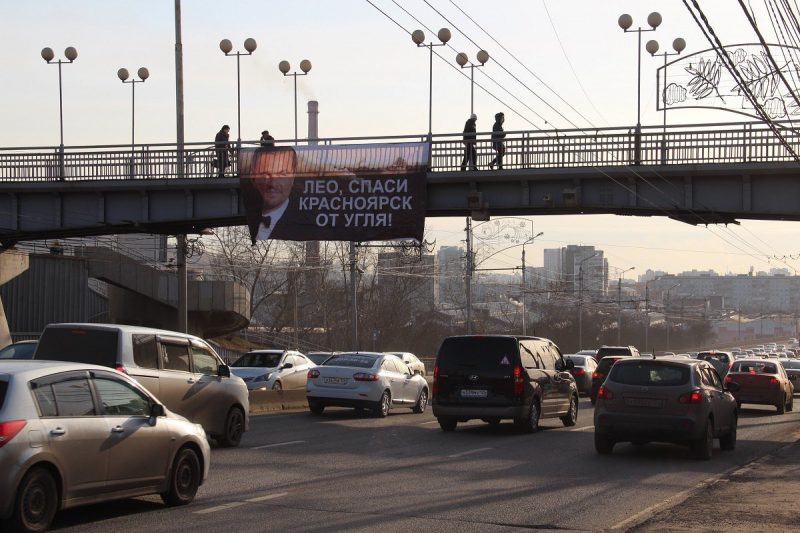 According to a popular legend many Russians learn in school, the Russian people 11 centuries ago invited “managers” from Scandinavia to come and help rule over their lands. The so-called “Varangian” tribe leaders (coming from the territories of modern Sweden and Norway) had a knack for good governance, and they were enormously helpful in Old Rus, the story goes.

The age of the Varangians came and went, but some Russians today are still looking abroad for another savior. In Krasnoyarsk, the third largest city in Siberia, local environmentalists have found their man: Hollywood star Leonardo DiCaprio.

This was just the latest stunt in a campaign against local power plants that's lasted years. Last month, for example, citizens held a public protest to demand that the powerhouses switch from coal to natural gas, which environmentalists hope would lower air pollution.

A founder of a wildlife conservation foundation in 1998 and a UN climate change ambassador, Leonardo DiCaprio is renown for his environmentalist work. When accepting his Oscar award last year, he devoted a good deal of his acceptance speech to climate issues.

Krasnoyarsk environmentalists’ appeal to DiCaprio represents a worldwide trend, when activists spend years hounding unresponsive local authorities, before appealing to the global viral community, in this case using a world-famous celebrity to draw attention to their cause.

Scholar Ethan Zuckerman (who co-founded Global Voices) coined the “cute cat theory of digital activism,” which suggests that somewhere between the images of adorable cats and brunch selfies, new forms of social activism can thrive.

By hanging banners appealing to Leonardo DiCaprio, environmentalists in Krasnoyarsk aren't putting direct pressure on the city's officials, but the publicity could bring the matter to their attention indirectly, perhaps more effectively than a traditional protest outside city hall.

A typical problem with viral campaigning is that struggles to transition from computer screens to the streets. As unlikely as it probably is, what could really help the campaign in Krasnoyarsk would be for DiCaprio himself to publicize the situation in the city.

In the meantime, Russian Internet users are already finding the humor in Krasnoyarsk's strange public appeal. “You're better off asking Chuck Norris for help. Leo can only deal with the potholes,” some people have joked. Showing an impressive grasp of DiCaprio's filmography, others have written in online comments: “They'll call in Tarantino for help with the street violence.”