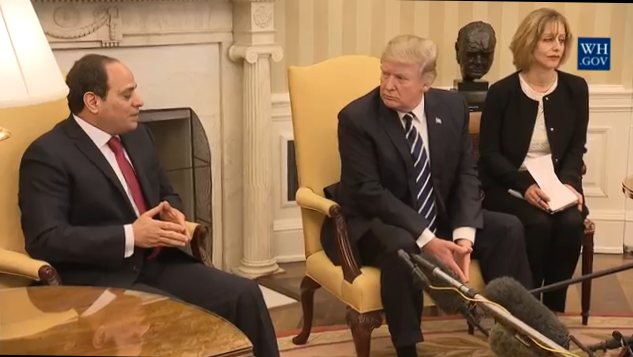 On Monday April 3, 2017, Egyptian President Abdelfattah el Sisi and his American counterpart, President Donald Trump, met at the White House as part of a six day-long trip. During the meeting, Trump praised the Egyptian president's fight against “terrorism” at a time when the Arab Republic is witnessing an unprecedented rate of human rights abuse.

On the chessboard of Egyptian politics, Sisi's friendly relations with the USA is no small matter. For decades, the US has been a primary source of funds allocated to the Egyptian military wing – funds deemed indispensable for Egypt's dictator, himself a former military commander in-chief.

It was an honor to welcome President Al Sisi of Egypt to the @WhiteHouse as we renew the historic partnership between the U.S. and Egypt. pic.twitter.com/HE0ryjEFb6

Sisi, who overthrew Egypt's first freely elected president, Mohammed Morsi, seizing power in May of 2014, is widely seen as bringing the Egyptian revolutionary scene back to zero.

As a matter of fact, Sisi's once enormous level of domestic support has significantly tumbled. Between imprisonment, enforced disappearances, and exile, Egyptians are now getting over a flourishing stage of ostensible democratic transition that followed January 25, 2011.

As Human Rights Watch explained, Egypt's autocratic head of state “has presided over near-total impunity for abuses by the military and security forces and the severe restrictions on civil and political rights”.

But as Sisi offers almost no room for political freedom, his policies are drawing increasingly negative reactions. The president's official visit to Washington, DC was met with both criticism and support, with Egyptians taking to Twitter via “The Egyptian American Summit” hashtag in Arabic to express themselves.

Activist Khaled Sweida tweeted a photo of prominent Human Rights Activist, Alaa Abdelfattah, who was sentenced to five years in jail on February 2015:

‘I'm in prison so that the authorities would make a lesson out of us. Let us be a lesson then… but with our own will #TheEgyptianAmericanSummit’

In contrast, Samy Abu Tera expressed his support for Sisi through the same hashtag:

Trump and Sisi get along well. Pilgrimage to Trump's office does not grant legitimacy. A ruler's legitimacy is conferred from the masses. Resorting to Trump is useless.

Other Egyptians, however, preferred using caricatures and memes.

One Egyptian Twitter user shared a caricature of Trump asking Sisi if he can teach him some of his tactics:

Al Sisi in USA to give Trump some lessons “how to kill your people” !! #usa #Humanrights #Egypt #السيسي @realDonaldTrump @AlsisiOfficial pic.twitter.com/ZI6GUu2Y0P 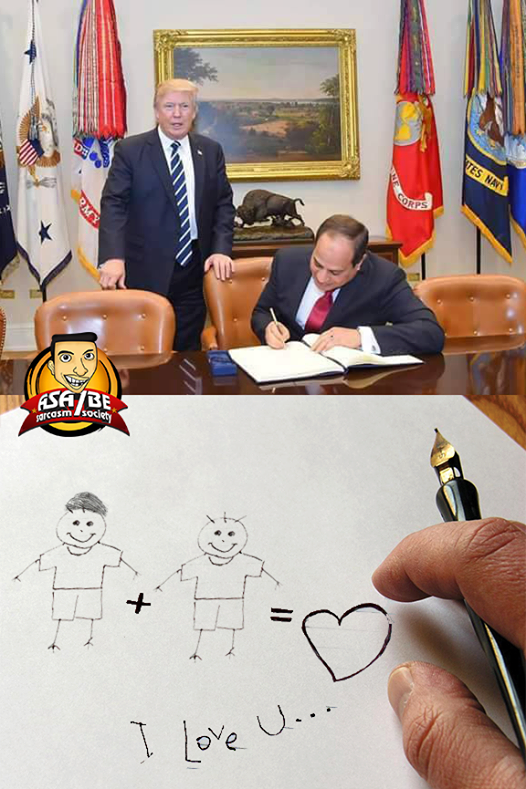 Another sarcastic page shared a photo of both Sisi and Trump walking along a corridor, with a quote underneath that reads: “When your father picks you up from school early”. The accompanying caption reads: “Trump…the joke of the modern era.” 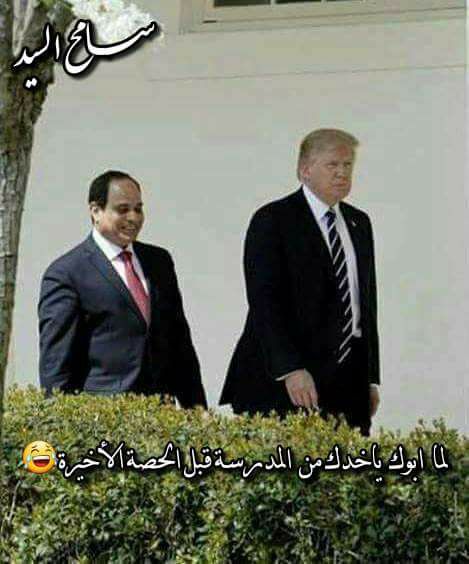