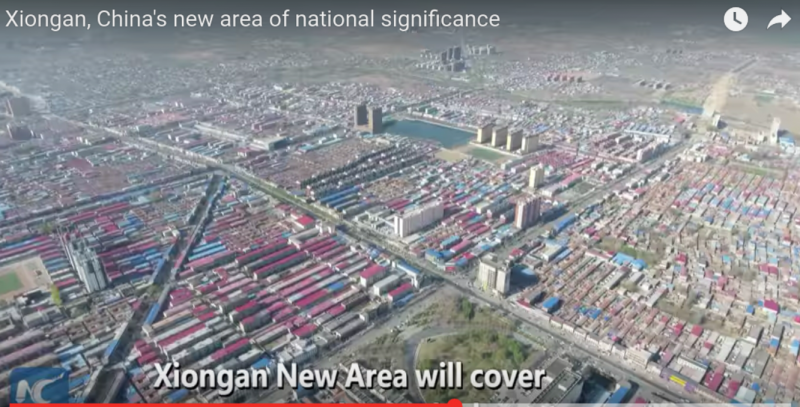 On April 1, 2017, Beijing announced a “national” and “historic” plan to construct a new special economic zone called Xiongan New Area, which is located in Anxin, an underdeveloped county in Hebei province, about 100 miles away from the capital.

In a joint statement, the Communist Party Central Committee and the State Council described the plan as “a strategy crucial for a millennium to come”. According to the planning blueprint, Xiongan will be a livable city designed to address problems that include pollution, over-congestion and the out of control property price challenges that haunt Beijing. Major institutions, such as state-owned enterprises, universities and science parks will be relocated to the new area, according to its official video introduction:

As soon as the plan was unveiled, property investors rushed to the new area. Within six hours, a number of local news outlets reported that property prices had surged to ten times their original value, from RMB 3,000 to RMB 30,000 yuan.

To suppress the frenzy of speculative investment, local authorities forcibly shut down property intermediaries and suspended all real estate transactions. But speculative activities have extended to the stock market, where listed companies packaged with the phrase “Xiongan concept” have all taken off like rockets.

Many have pointed out that such speculative activities are irrational, because the success of the new area depends on the abundance of an affordable housing supply. In fact, the central government has decided that the majority of properties built in the area will be public housing. As China policy observer Yang Shan pointed out on the investigative news platform, Initium:

Using public housing to counteract against the property market is a strategy to attract the young generation who could not afford to have their own property and remain rootless in first tier cities to settle in the new area, where they can find jobs and an affordable apartment so that they can feel that they are moving up the social ladder. In addition, the plan attempts to build a northern Shenzhen [special economic zone] with the idea of garden city and ecological city… if the plan works out, it can be a model: governments [from first tier cities] could fight against pollution and out-of-track property prices and provide opportunities for the young people to have a China dream. If it is successful, it will become a legacy under Xi Jinping’s leadership, or a utopia model of the China dream.

However, many are skeptical about whether the plan will really work. For one thing, the speculative activities have disrupted the idea of “affordable” housing, inferring instead that people’s dreams are still resting on the bubbling stock and property market.

Moreover, when compared with other successful economic zones, Xiongan does not have a geographical advantage. Shi Han Bing, a famous blogger on China’s development trend, pointed out:

When compared with Shenzhen and Pudong, Xiongan is not at the coastal area; there is no harbour. Xiongan is located in an underdeveloped region where people are not as open. Shenzhen is near the international financial center, Hong Kong, while Putong New Area is next to Shanghai, which is not an international financial center but is still a top city in China. Xiongan does not have this advantage. Beijing though, is also a huge economic entity — it relies on the concentration of administrative resources — this is different from Guangdong and Shanghai region.

In past decades, China has made many attempts to build special development areas, but there are only a few successful cases thus far. Shi Han Bing pointed to one failed venture:

Yet in 2014, according to media reports, the construction of infrastructure for four major industries has been delayed. Many construction projects have been suspended because of debts. The city is empty with very few residents…

The capital will remain in Beijing. They only want to move people out of Beijing. Xiongan is a fake economic pretext to move the population, as well as the potential threats to the central CCP [Chinese Communist Party]. For example, the visit petitioners [petitioning is the country's administrative system for hearing complaints and grievances from citizens]. In the future, they can no longer gather around Zhongnanhai [government headquarters] but end up gathering around Xiongan.

Another new area has been set up, the Xiongan New Area. I don’t care about this new area or that special district. All I care about is the setting up of a special democratic district, in which people can enjoy one person one vote. A district where there is no 50 cents [the colloquial term for internet trolls], no national security police, no dictatorship, no district party secretary.