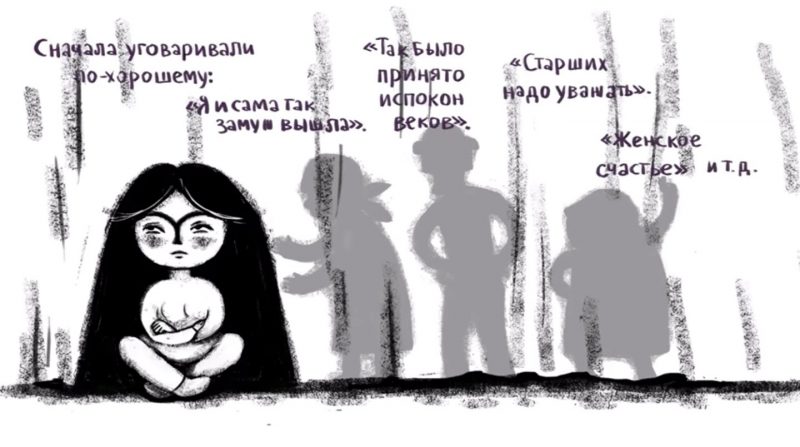 Screenshot from one of five ‘One Day They Stole Me’ animations produced by Kyrgyzstani artist Tatyana Zelenskaya and animator Egor Tankov.

While statistics are difficult to pin down, an oft-cited piece of research suggests that around a third of all Kyrgyz marriages are the result of non-consensual kidnappings.

Kidnapping for marriage, or ‘Ala Kachuu’ became commonplace in the country following its emergence from the former Soviet Union in 1991; the country's Ombudsman institution believes there are around 8,000 such kidnappings every year.

The boom in ‘bride kidnapping’, which researchers have emphasised is not a time-honoured tradition but rather a modern crime rooted in the Central Asian country's specific socioeconomic circumstances, shows few signs of abating.

In recent years, however, civil society and some elements of the government have been increasing efforts to combat a phenomenon that sometimes entails rape for the victim, and — nearly always — impunity for her captors. 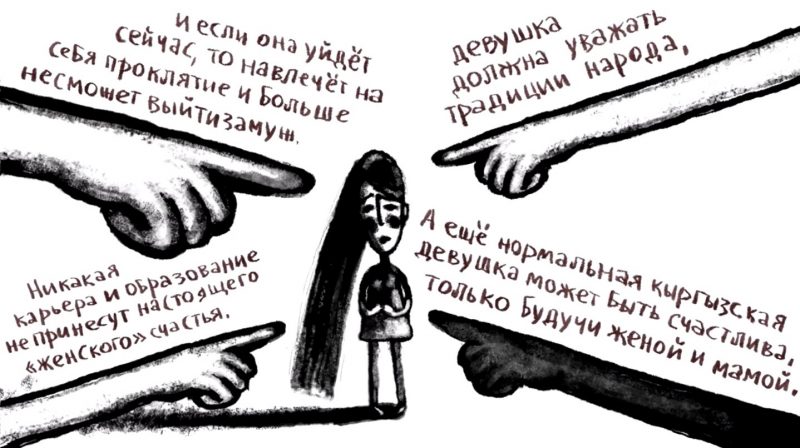 Screenshot from one of five ‘One Day They Stole Me’ animations produced by Kyrgyzstani artist Tatyana Zelenskaya and animator Egor Tankov.

Five years ago, Global Voices covered a series of videos produced by a local women's rights organisation that were aimed at promoting the application of the rule of law in relation to kidnapping. The message of these videos was simple: Bride kidnapping is illegal and should be reported and punished.

Now a husband and wife artist-animator pair from the country's largest city, Bishkek, have reignited the bride-kidnapping debate with a series of animations that have torn through social networks in the country.

Artist Tatyana Zelenskaya and animator spouse Egor Tankov say that the animations are all based on true stories, although names were altered at the subjects’ own requests in order to protect real life identities.

The first of the animations, which feature a Russian-language text and a Kyrgyz-language voiceover, documented the kidnapping of a girl ‘Nazik’, and was released last month in time for International Women's Day.

The story lacks the drama of a stereotypical kidnapping wherein a young girl is dragged kicking and screaming by her captors into a getaway car. Instead, it highlights the multiple layers of subterfuge, betrayal and subsequent regret that are involved in these life and family-changing incidents.

Nazik's fate was marked when a friend of her mother's visited the family home. She was accompanied by her son, Abay.

Nazik's brother and mother “almost physically forced” Nazik to leave the house and go to the cinema with Abay, an acquaintance from childhood. When she left the house, she had neither her mobile phone nor any money with her.

Shortly after they got into a car marked as a taxi, the taxi's driver removed the roof sign. He was never a taxi driver, but rather Abay's friend, there to help Abay kidnap Nazik.

Their destination was not the cinema, but Abay's family home, where a wedding was waiting for them. Nazik said at the wedding that she would like to speak to her parents, but her brother, who arrived later with his own family, spoke for them:

Nazik, our father has decided that you will stay here. Abay is a good man and will make a good husband. Getting married means happiness for any girl!

The words — confirmation that the head of Nazik's family endorsed the union — had a profound effect on Nazik. So much so that when her mother later phoned and asked in a tearful voice if she wished to forego the marriage and come back home, she refused, deciding to stay with Abay and his family.

But Nazik's brother had lied. Nazik's father did not know his daughter was going to be kidnapped that day and flew into a rage when he found out. By that time, a mullah had already blessed the marriage.

The kidnapping, we subsequently learn, was orchestrated chiefly by Nazik's mother, who disliked Nazik's boyfriend at the time. Later, realising her terrible mistake, she phoned Abay's family home in order to offer Nazik a way out. Fearing the potential stigma associated with breaking off the marriage, Nazik refused to take it.

“We did not make a happy family,” Nazik recounts at the end of the video. “After four years [Abay's family] kicked me and our child out of the home.”

Elzada's kidnapping took place at a time when her father was seriously ill — a distressing period in her life that also saw her younger sister stolen for marriage. Unlike in Nazik's case, Elzada's own family doesn't appear to have played a role in the kidnap, although her future husband was a friend of her brother's.

She initially refused the marriage to Talgat, a lazy man whose only occupation is lying on the sofa and watching television.

“Only our children keep us together,” Elzada now confesses. “I am the one who earns the money and I make all the decisions. Not only do I not love him, I don't respect him.”

Again, stigma appeared to be the key factor in Elzada agreeing to the marriage. To begin with, her future in-laws gently encouraged her to accept the situation, before resorting to intimidation.

One of the male in-laws told her:

Probably, you are not a virgin and you do not want everyone to find out.

Elzada understood that she could have become the subject of vicious gossip if she broke off the marriage. But would that really have been worse than a life with a man she does not love?

Elzada's story, in which the woman remains with her captor, is the most representative of the bride kidnapping phenomenon in Kyrgyzstan. Powerfully projected through a prism of regret and resignation in Zelenskaya and Tankov's animation, it somehow seems the most harrowing of the five.

Aliya's story is the story of an unsuccessful kidnap attempt, but one that shows how destinies can be altered in the course of ‘negotiations’ with a would-be-groom.

Aliya and her sister were invited to a cafe by some men. One of the men told Aliya that he liked her, and intended to kidnap her in order to marry her.

Aliya responded by behaving in a way that she knew would put her potential husband off. Rather than acting in solidarity, her sister was mortally embarrassed, and her deference to the men pleased them. After returning from a smoke outside the restaurant, they announced that they would kidnap Aliya's “decent” sister instead of the renegade Aliya.

Suddenly alarmed by the fate she was happy enough for Aliya to suffer, Aliya's sister pleaded with them not to kidnap her, claiming she had already arranged to marry another man. Flummoxed, the men eventually allowed the pair to leave, and presumably began scheming to line up another young woman for marriage…

Begaim's story is the only story in which an incident involving extreme sexual violence is included in the narrative. We are introduced to her as a young woman travelling to London as part of her work with a rights-based organisation.

On the airplane she refuses the steward's offer of a complimentary stick of mint chewing gum.

The reason she “hates” mint chewing gum, we learn, is because of the smell — mixed with vodka — on the breath of the man who raped her after he kidnapped her.

Begaim escaped the marriage because both her parents opposed it; her father drove to retrieve her and even punched the man that raped her.

For a year after that I couldn't go outside, and any [human] contact made me shake. I had nightmares and couldn't sleep. Even today, I still sometimes dream of that awful night, those dirty hands, the smell of mint chewing gum.

Nargiza's kidnapping was arranged by her match-making aunt and followed a familiar pattern; she was taken to the family house where she was intended to live. Her kidnapper's relatives told her to accept the marriage, using the same words of encouragement and intimidation seen in the other stories. Yet when they attempted to force the symbolic white scarf on her, she resisted.

Her mother found out about the event after Nargiza phoned her from her would-be in-laws’ home. Initially she attempted to persuade Nargiza to stay. But Nargiza continued to refuse, and threatened to call the police. A recently introduced law targeted bride kidnappers with sentences of five to ten years, she told her mother over the phone, as the kidnappers listened in horror.

Eventually the aunt and in-laws backed down. ‘Nargiza’, who of all the sources used by Zelenskaya is the only one who has since revealed her true identity, is now a presenter on Kyrgyz state television. 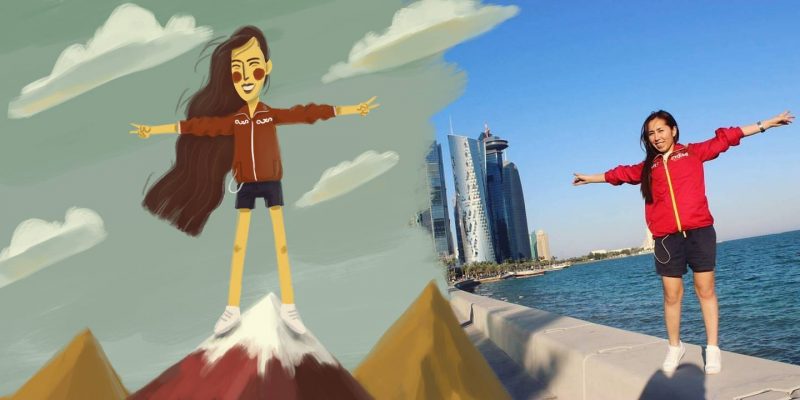 The story of Guljan (‘Nargiza’) is the last in the five-part series, and Zelenskaya explained why she released it last in an article for the outlet Kloop.kg:

I wanted to show it at the end because in my view it is the most important of them all. I want girls to see in this clip some kind of instructions. [I want them] to know how to act and how to fight for their rights, that they can threaten [kidnappers] with the police and criminal prosecution.

Overwhelmingly, social media users in Kyrgyzstan have lauded the animations, but some have reacted in anger and denial.

Zelenskaya told Global Voices that she is hopeful that one of the country's national television channels will show the animations so they can reach people living in the country's provinces and smaller towns, where incidents of bride kidnapping are highest and internet penetration lowest.