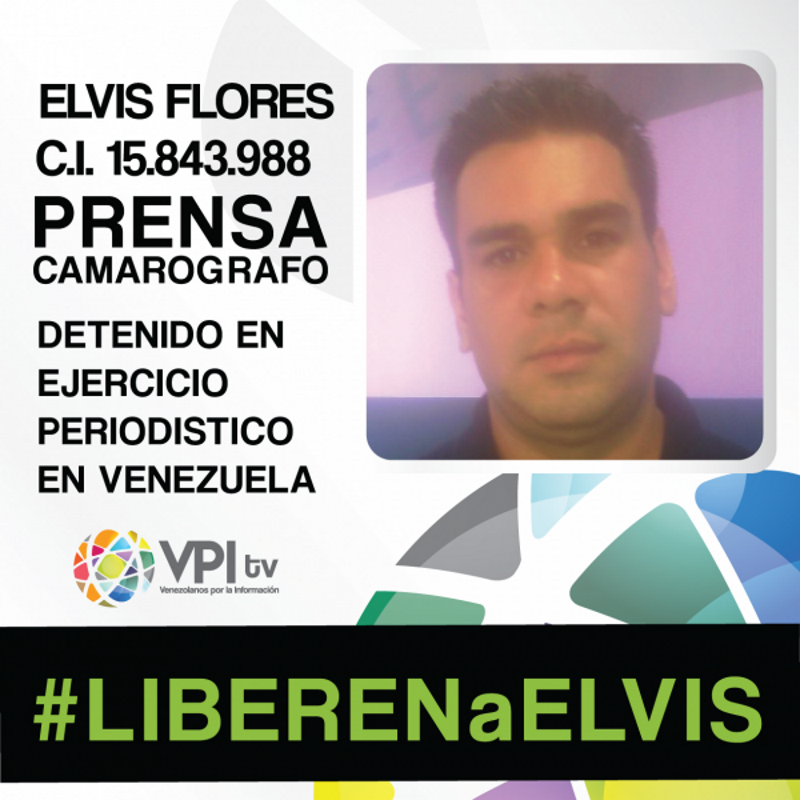 Update: Elvis Flores was freed by midnight, April 6, 2017. He was held in custody for 9 hours and was reportedly beaten.

VPITV's cameraman Elvis Flores was freed this Thursday's midnight. He was beaten and was held illegally for 9 hours.

On the afternoon of April 6, 2017, Venezuelan authorities arrested Elvis Flores, the cameraman for online channel VPITV (Venezuelans for Information). VPITV had been broadcasting protests in Caracas, which were organized by those opposing Nicolás Maduro's administration.

The demonstrations unfolded last week after the country's Supreme Court dissolved the parliament and reassigned its functions to the executive branch and the Supreme Court itself.

#URGENT This is the moment when Elvis Flores, from @VPITV, was arrested by the PNB. We do not know his whereabouts. #April6

At the time of his arrest, police took Flores’ equipment and VPITV was subsequently forced to stop the broadcasts, which remain inaccessible at the time of this post's writing.

The channel, which broadcast its coverage through platforms like YouTube and Periscope, which stopped covering scenes of protest several years ago to avoid potential financial sanctions and shutdown by the National Telecommunications Commission, which has previously stated that coverage of protests can be considered incitement to violence.

Almost 30,000 people were watching the @VPITV broadcast on YouTube when the PNB took the cameraman.

In recent years, particularly in times of protest and crisis, Venezuelans have turned to social networks and broadcasts via streaming to obtain information outside of official channels, which are subject to increasing censorship.

Press conferences and statements from main political opposition parties are frequently broadcast through Periscope. On their part, the National Assembly – whose functions have been unknown to the executive branch – broadcasts its sessions through YouTube.

Despite the arrests of social network users and the deterioration of telecommunications, the Internet continues to be a battleground for Venezuela.