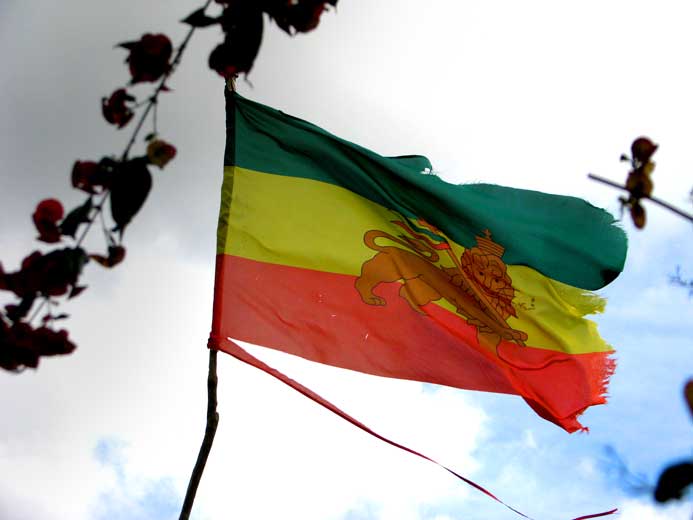 The Rastafarian Flag; Image by dubdem sound system, CC BY 2.0

On April 4, Jamaican Prime Minister Andrew Holness made a historic apology for the “grave injustice” of an attack made on Rastafarians between April 11 and 12, 1963 — the year after Jamaica gained its independence from Great Britain. Alexander Bustamante was the country's prime minister then, and he headed the Jamaica Labour Party — the same party that Holness leads today. Eight Jamaicans were killed in Coral Gardens (near Montego Bay) on what has come to be called “Bad Friday”, since it was Easter at the time.

As many as 150 Rastafarians were rounded up, arrested, beaten and abused; their dreadlocks, which have religious significance, were cut. The series of events that led up to the attack were part of an atmosphere of systematic oppression, discrimination and open hostility towards Rastafarians that had begun prior to independence, all of which were documented in the 2011 film, “Bad Friday”.

The prime minister announced that six lots at a historically relevant property at Pinnacle in rural St. Catherine would be declared as a protected heritage site by the Jamaican National Heritage Trust; he also promised assistance for the Coral Gardens Benevolent Society, and said a trust fund of no less than J $10 million (just over US $75,000) would be established for the benefit of survivors. The Pinnacle property has been the source of some controversy. It is regarded as the first Rastafari settlement in Jamaica and the former home of Garveyite Leonard Howell, who is widely considered the founder of the Rastafari movement. After Howell's death, legal battles began over the ownership of the land and the Rastafarians were finally threatened with eviction in 2014.

Holness also acknowledged public defender Arlene Harrison Henry's investigation and subsequent report on the matter, which was submitted to parliament in December 2015. In it, she recommended an apology and reparations for the survivors.

Prime Minister Holness tweeted a photograph of his meeting with Rastafarian elders:

We continue to strive to ensure that unjust incidents and discriminatory actions are never allowed to happen again. #RastaApology pic.twitter.com/6HQgBFpcNn

Chairman of #CoralGardens Benevolent Society, IKA TAFARA, says Rastafari all over Ja were affected.. not only those at #CORALGARDENS pic.twitter.com/hrzt2KUmfH

The response from Jamaicans on social media was largely positive — especially from those whose families had been affected:

My grandpa would approve. Better late than never #CoralGardens

For some, it brought back memories:

#CoralGardens My father, a policeman, refused to be a part of the roundup. “dem no break no law! I am not arresting a man for long hair”

@AndrewHolnessJM My Fathers trusted employee was a victim of those horrific #Rasta round-ups in Montego Bay! They shaved his head #CoralGardens #RastaApology

There was more praise for the prime minister's statement. One Jamaican referred to a recent unpopular announcement about property taxes:

For Andrew Holness to take the responsibility, and apologize in his tenure to the Rastafarian community is another step towards sharpening our independence. It's the same way children must take responsibility for the ills of their parents, just as they took the harvest of prayers and unmerited blessings so they can alleviate held over bitterness. Well done servant First Minister. History will absolve you for hiking property prices when they find out you were a true statesman. The world is not going to the devil, it is going to God. #thoughtsonimproving

While Peter Phillips, who had just been formally welcomed as the new leader of the opposition in parliament, welcomed the move, one Jamaican cynically referred to Phillips’ younger days as a practising Rastafarian:

So our PM has done more for Rastafarian in the 18 months he is in power, compared to the leader of the opposition who himself was a Rastafarian. #leadership #coralgardens #goodgovernance

@AndrewHolnessJM Pinnacle being granted a protected heritage site and “developed as a “Rastafari village and cultural centre”, is an excellent overdue move.