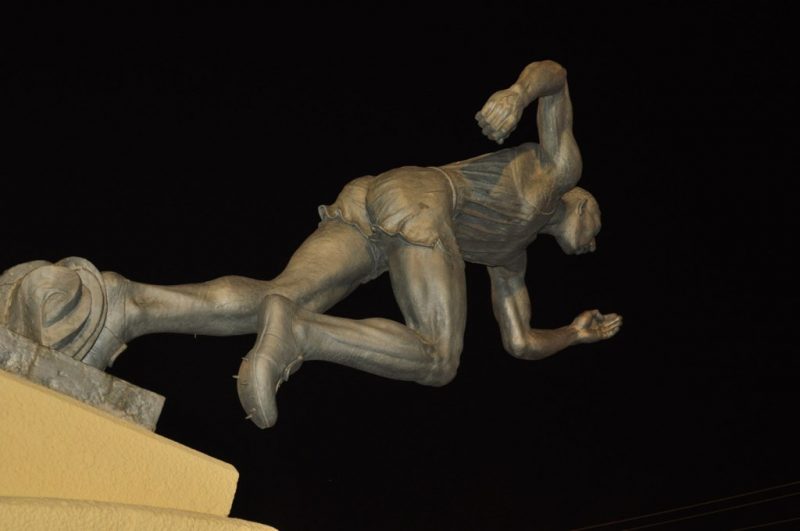 Jamaicans are, unsurprisingly, crazy about athletics — especially track events. The country’s success at the 2016 Olympic Games in Rio de Janeiro and the worldwide Usain Bolt phenomenon help to fuel the continuous burning interest in all things track and field. As a result, the Inter-Secondary Schools Sports Association (ISSA) Boys’ and Girls’ Athletics Championships (commonly known as “Champs”) seems to garner increasing media and public attention every year, with cheerleaders, drums, flags, chants, school colours and the “big” schools setting up camps near Kingston’s National Stadium.

And this year's contest was no exception.

The newspaper The Gleaner tweeted a picture of a Kingston College (KC) supporter sporting a purple beard:

Champs is in the ‘hair': This KC supporter sports his purple-dyed beard at #Champs2017. It's Day 5 and we are here. #glnrChamps pic.twitter.com/B8RyIHjiiG

This year, the rivalry was intense, particularly between last year’s winners, Calabar High School, and the highly-touted Kingston College (KC) — both male-only institutions based in the capital city. However, there was added controversy over a 16-year-old Ugandan boy, Arymanya Rodgers, who migrated to Jamaica in October 2016 and was selected to run for KC. The principal of Calabar High School was not amused when ISSA voted to allow Rodgers to participate, despite his late arrival in Jamaica and delayed registration. While the dispute between the two schools’ administrators rumbled on (sustained by several newspaper columns and sports journalists’ opinions), a parallel argument continued online among avid athletics fans.

Jamaicans on social media had a lot to say, with sharply divided views on whether Rodgers should have been allowed to run. While there were a number of negative comments on Facebook, Rodgers pleaded with Jamaicans to be more understanding of his plight, as the circumstances of his arrival on the island were beyond his control.

On Twitter, Robert Nesta Morgan suggested there was hypocrisy in Jamaicans’ criticism of Rodgers:

Jamaicans who love to go to other people country for jobs and other benefits are cussing this young Ugandan? Say it ain't so.

Actress and media personality Dahlia Harris also supported the Ugandan, noting that many Jamaican athletes have benefited from overseas sponsorship:

We don't remember how many Ja athletes got and still getting scholarships in the US? Leave the Ugandan alone!

From Uganda to Kingston, Jamaica. Shout out to Rodgers Aryamanya, he's a special athlete. pic.twitter.com/M2YsmQTtIn

Jamaicans who don't need an excuse to fly our flag in another man's country are cussing this Ugandan? Say it ain't so.

However, a distinction was made between international events (such as the Penn Relays, where Jamaican teams do well) and local ones:

@NestaJA Yes bc it's a school event! Any flag waving should have been the school flag. It's not an International athletic meet.

Krista-Gaye Forbes wondered about “Ari's” future in a blog post:

The real issues arise, however, when the stadium lights go out and Ari Rodgers becomes your everyday STUDENT-athlete. Now, he’s here — we’ve brought him here (yes WE). How has his future been altered as a result of that decision?

What’s next for the youngster who, (though still has time), has virtually no competition locally and is just under a minute short of being a qualifier on the NCAA division 1’s top 95 list in the 5000m?
This isn’t a question just for his caretakers. These questions are for decision makers who’ve just opened the floodgates. How do we protect the futures of other students like young Rodgers beyond high school athletics

The brouhaha surrounding the (successful) attempt of those tasked with the upbringing of Ugandan teenager Arymanya Rodgers to come to Jamaica to live and continue his education brings into sharp focus the ‘abuse’ of a child.

Young Rodgers had his application to transfer to Kingston College (KC) approved and left his native land Uganda in time to fulfil the requirements of a successful transfer. However, a series of blunders…resulted in a planned arrival in Jamaica on or around August 24, being transformed to his physical arrival here on October 16 and arriving on the doorsteps of KC on October 18 last year.

Since his arrival, young Rodgers has excelled academically, and more important, it seems, has proven to be an exceptionally gifted middle- to long-distance runner.

His academic success in class (98 percent in a recent mathematics exam, according to his headmaster) seems to be of little interest to educators of rival schools. What has irked some of these leaders is the fact that he now has the potential to be a major factor in the ‘fight’ between the top schools to win at Champs, thus qualifying for mind-boggling monetary rewards, previously unheard of in this annual athletics competition. Thus the win-at-all-cost mantra of once-upon-a-time friendly rivalry among schools has resulted in a bizarre breach of accepted protocol regarding decisions made by the executive of Inter-Secondary Schools Sports Association (ISSA), the body of principals who control Champs, and the threatened withdrawal of one of the major players in Champs from participating in some of the pre-Champs ceremonies.

This has resulted in a flurry of unsupportive comments on social media, and a call from a sports journalist for KC to ban this child from representing his school at Champs. The effect of all of this … ‘He is unhappy. He feels down, especially when he goes on Facebook and sees everything that is being said about him’, to quote his headmaster at KC, Dave Myrie…’

The ISSA rules, as they regard qualification to compete, are quite clear. One is hard-pressed to recall an occasion when their implementation has been mired in such controversy as in this matter regarding the Ugandan athlete. If the latest ruling can give rise to this type of confrontation that puts one school's top administrator up in arms with his counterpart elsewhere, maybe it is time to design an alternative strategy. The fact that the students could attempt to justify their sometimes recalcitrant behaviour on the grounds of ‘Is the same thing Sir did on TV last night’ provides just cause.

Foster's Fairplay suggests that disputes such as the on-going one should be discussed and settled by a designated body, far removed from the schools’ administration. The latter should be left to cater to the diverse demands of educating students and preparing them for the wider world.

There can be no doubt that Champs is a blessing to be nurtured and cherished. However, it tends to bring out some disturbing traits in some of the persons involved in its structure and execution.

This prompted a biting retort from the chair of Kingston College in a letter to The Gleaner:

I am disappointed, as Mr Foster has failed to exercise fair play in some of his statements in the said column. Contrary to Mr Foster's assertions, the principal of Kingston College has not been involved in any public ‘punches and counterpunches’ with the principal of Calabar High School, nor has he been on any radio programme ‘airing … grievances’ in connection with any matter arising from ISSA's decision relating to Kingston College student Arymanya Rodgers.

The irony in Mr Foster's false assertions is that Dave Myrie, the Kingston College principal, has refrained from any such action because, in addition to other reasons, he shares Mr Foster's view that one of the primary responsibilities of school principals is ‘the establishment and maintenance of discipline, good order, and industry’ among students.

So in the end, which school won? Despite a strong challenge from KC, Calabar High School narrowly won its 27th title — and sixth consecutive win — by just three points, with another Kingston boys’ school, Jamaica College, a distant third. The result emerged after the last race.

Meanwhile, Rodgers is having second thoughts about representing Jamaica at some point in the future, after negative feedback on social media to his participation this time. He told The Jamaica Observer:

Maybe sometime to come I may represent this country, but if I keep on hearing this negative attitude by these people, you never know, I may change my mind…

But I have to remain focused. These haters, these people who talk things about me, I want to prove them wrong.

It would be a shame, however, if Rodgers lost heart, simply because of the naysayers. Many young Jamaicans were, in fact, far kinder:

A PRAPPA-PRAPPA Jamaican good-up, good-up SHOUT OUT to Ugandan Arymanya Rodgers. WELCOME TO JAMAICA my dear, and PLEASE take heart that NOT all Jamaicans are SAVAGES!!!!
PLEASE know that MANY of us are PROUD of your God-given talent and we DO SALUTE you for performing SO superbly EVEN in the face of ALL you had to hear and read being said about you.
I ASHAMEDLY apologize for the VERY poor and UTTERLY disgusting behaviour of my countrymen and ENCOURAGE you to CONTINUE to hone your AWESOME talent and pursue your dreams.
Hopefully, I WILL see you at the Olympics in the future, where, if you should be wearing the Jamaican colours, these SAME Jamaicans who are disparaging of you WILL be your BIGGEST cheerleaders.
Despite this HORRIBLE showing, we TRULY are a nation of out of MANY, one people. ONE LOVE MY LIL AFRICAN BRO […].

The girls in the rural-based Edwin Allen High School won for the fourth consecutive year. As usual, there was much less emphasis and “hype” surrounding the girls’ win, although they left their rivals in the dust with a much wider margin of victory.

As the fireworks display died down, ordinary Jamaicans were left to reflect on the nation’s state of overall fitness. The Ministry of Health just launched “Jamaica Moves,” a new fitness campaign, after revelations that 56 percent of Jamaicans are overweight and a quarter of the country is medically obese.