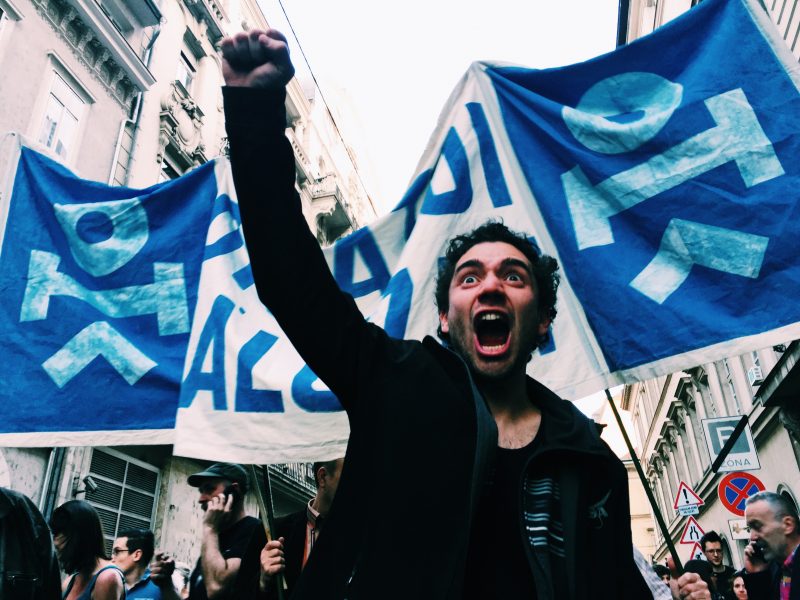 Protester at the rally in support of Central European University in Budapest, Hungary. Photo: Gábor Ezra Tausz, used with permission.

On the 4th of April, the Hungarian government passed a controversial amendment added to new legislation on higher education. The vote took place in a special procedure requested [1] by Hungary's deputy prime minister.

According to Central European University (CEU) and its supporters around the world, the amendment would make it impossible [2] for the school to continue operating in Hungary, where it has been located since 1993.

Journalists in Hungary and abroad have argued that lawmakers’ apparent aim is to force the university to close down.

The amendment would require CEU to open a campus in New York, where it has a charter from the Board of Regents of the University of the State of New York, and reach a bilateral agreement with the U.S. federal government to issue both American and Hungarian diplomas to its students.

According to a statement [3] by the Hungarian government, the aim of the amendment is for foreign universities in Hungary “to operate lawfully and transparently by complying with Hungarian regulations.” The ruling party argues [4] that CEU enjoys an unfair advantage by issuing both Hungarian and American degrees.

This may be good business for George Soros, but in the competition between universities it represents an unfair advantage.

George Soros is the founder of CEU. A controversial figure in many places, Soros has been celebrated and criticized for promoting democracy through organizations like Open Society Foundations.*

At a press conference [5] held after the parliament's vote, CEU representatives said the university's Hungarian and American charters wouldn't be able to function separately:

A bill passed on a fast track

On the 31st of March, Viktor Orbán, the prime minister of Hungary, said in an interview to a public radio station:

Cheating is cheating, whoever does it.

According to Index.hu [6], Orbán was referring to now mandated bilateral agreements when universities are from countries outside the Organization for Economic Cooperation and Development (OECD).

Following the interview, CEU immediately issued a statement [6] denying any allegations of “cheating,” insisting that it has operated within Hungarian law over its 25-year history in Budapest.

Last week, critics of the draft said it amounts to an attack on the freedom of education. Online, activists have begun using the hashtag #IStandWithCEU [7]and supporters created the Twitter account @StandWithCEU [8].

We are part and parcel of academic life in Hungary. The law is damaging academic freedom in HU and EU says Rector @ceuhungary [9] #IstandwithCEU [10]

At the time of this writing, there are more than 45,000 signatures on a Change.org petition titled “Save Central European University [14]” — already 20,000 supporters more than the campaign's initial goal. The initiators wrote in the petition's description:

We, scholars, students and supporters of free and unbiased scientific research and education call on the Hungarian National Assembly to drop the proposed legislation and to enter negotiations with the leadership of CEU that will ultimately allow this prestigious university to remain a proud contributor to scientific discourse in Hungary.

In an email sent out to CEU contacts on March 30, President and Rector Michael Ignatieff asked for support:

It is time to gather together to defend our institution and the principles of academic freedom. We urge you to communicate respectfully to your members of Parliament and other representatives (a sample letter is available here [15]), and to publicly share your support for CEU, a proudly Hungarian and American institution of higher education, a university whose freedom is in danger. 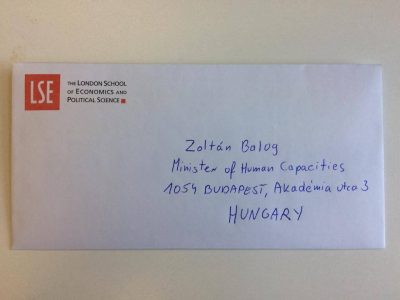 Dr Pawel Bukowski, a CEU graduate, currently working as a research economist at the London School of Economics, shared a picture of his letter to a Hungarian minister. Photo: Facebook / Used with permission

Many CEU alumni have high-profile public-sector jobs around the world today, including some members of Hungary's ruling political party. With this graduate network, the university has been able to reach out quickly to a wider public.

Last week, supportive letters and emails started pouring in from students [16], universities, academic institutions, Nobel laureates [17], scientists, writers, the U.S. Department of State [18], and even the Washington Posts’ editorial board [19]. The university published a list of these statements here [20].

The mayor of Vilnius, another CEU graduate, also wrote a letter to the school's rector, inviting the university [21] to move to Lithuania. This was followed by an invitation from the mayor of Slupsk [22] in Poland.

On the 2nd of April, thousands in Budapest rallied in support of Central European University. Solidarity events were held by Hungarian citizens and CEU graduates at the Hungarian embassies in Berlin [23] and London [24], as well. 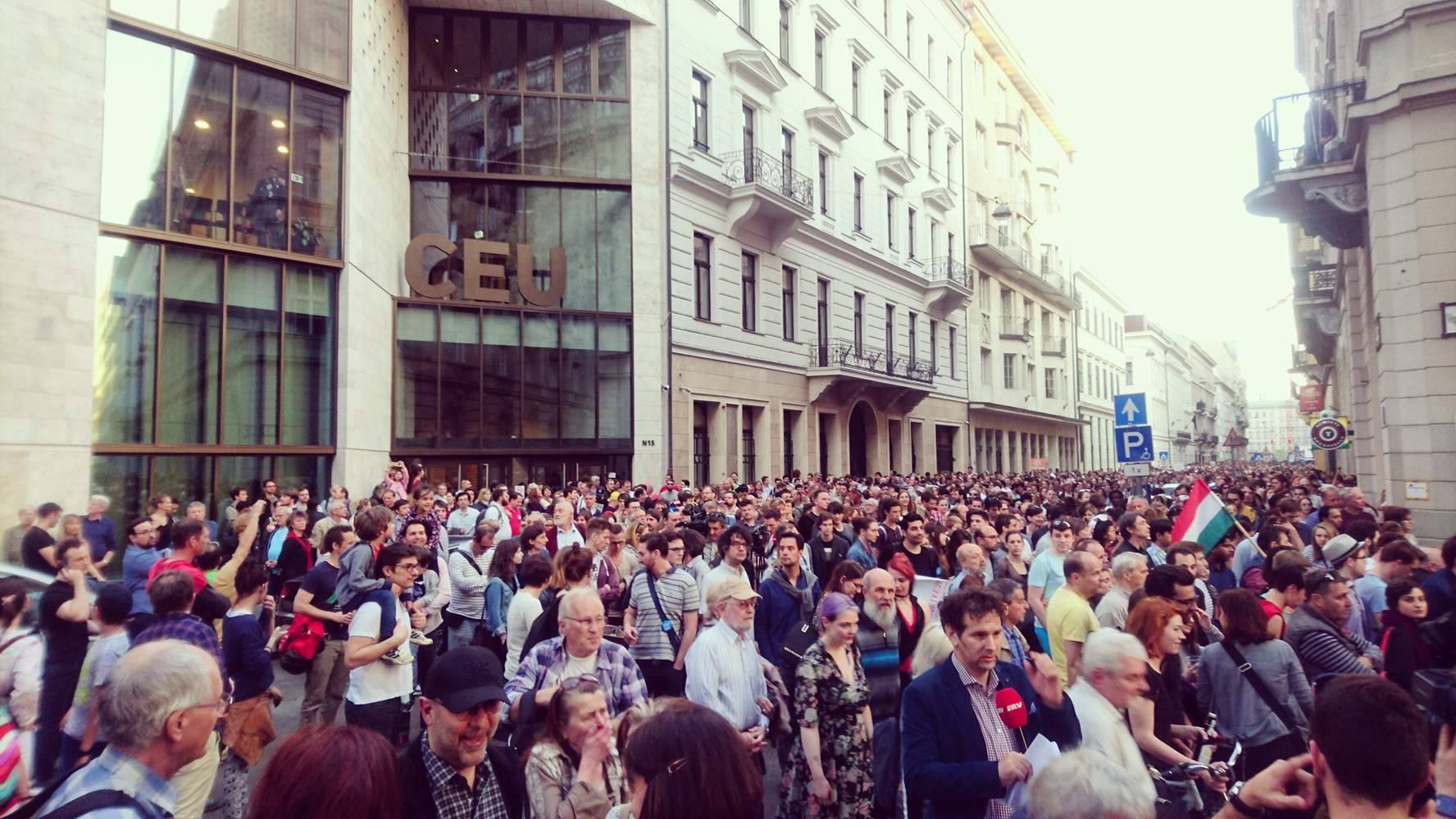 The news site Mandiner shared a time-lapse video of the crowd in Budapest in the same day:

Here you can also find a network visualisation [25] depicting the hashtags frequently mentioned together with #istandwithCEU. Precognox also published a word cloud of the most used hashtags on the topic.

Word cloud of CEU tweets by Precognox. Used with permission.

Hungarians demand veto from the president

The news site 444.hu [26] published a list of the 123 parliament members, all from the governing coalition, who voted for the amendment.

There was also a protest [27] at Central European University's city center buildings on Tuesday afternoon, where students spoke up for their university.

I live in a country where greatest enemies of the government are the NGOs, human rights, academic freedom, and people fleeing war.

She asked the head of state, János Áder, not to sign the amendment and send it back to parliament for review.

Daniel T. Berg, another CEU student, shared the story of his mother, who escaped Hungary in the 1970s in the trunk of a Trabant car.

The blog Kettős Mérce (Double Standard) published updates [32] about the day's events. After the rally at CEU, protesters walked to the nearby parliament, where they attempted to hang a European Union flag. About 300 people sat down in front of the building, facing a police cordon.

The bloggers promised that protests will continue on Wednesday and throughout the week.

On Facebook, Hungarian university professors have started promoting a strike. Tibor Bárány of Budapest University of Technology and Economics wrote [33] that he would completely stop working until parliament withdraws the amendment, if teachers at home and abroad would join a strike.

* Open Society Foundations, founded by investor and philanthropist George Soros, supports Global Voices editorial projects, including RuNet Echo. The organization also supports Global Voices Advocacy, Rising Voices, the Technology for Transparency Network, our core operations, and our summit meetings.
The author of this piece, moreover, has worked on several projects funded by the Open Society Foundations, and helped organize a protest in London against the amendment described in this text.