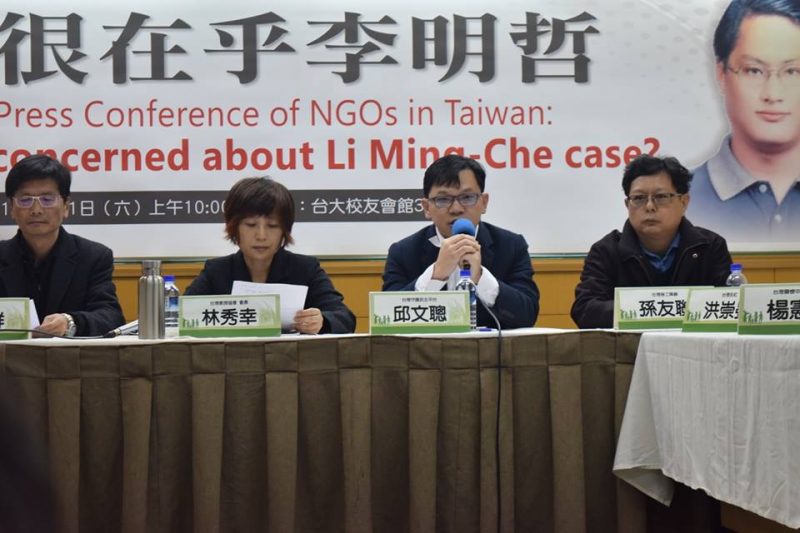 Taiwanese NGOs Press Conference on the disappearance of Lee Ming-cheh on March 31, 2017. From Where is Lee? Facebook page.

Taiwanese NGO worker and human rights activist Lee Ming-cheh disappeared on March 19 after entering China from Macau. Now, his wife has decided to travel to Beijing in order to retrieve him.

China’s Taiwan Affairs Office spokesman Ma Xiaoguang said Lee was being investigated on “suspicion of endangering national security”, some ten days after his disappearance. But Chinese authorities have not disclosed his whereabouts.

His wife, Lee Ching-yu announced on March 31 that she would travel to Beijing to rescue her husband. She explained her decision in a press statement (translated by China human rights advocacy site China Change):

I know from the history of the White Terror in Taiwan that when a country’s system of rule of law hasn’t risen to international standards, all attempts to offer defenses according to the law are useless. We can only offer a defense of humanity and human rights — but the legal systems in such countries aren’t built upon universal conceptions of human rights.

It is for this reason that I make this considered announcement: I am not going to hire a lawyer and thus engage in pointless legal wrangling.

All human rights workers, all those who bring hope to corners of the world that need human rights upheld, are innocent. It is precisely through the contributions of such individuals that human welfare and civilization grows.

My husband acted selflessly and with love for mankind, and I am full of confidence that everything he has done is worthy of the utmost respect.

I’ve decided to travel to Beijing, find out what is going on, and rescue my husband.

Born in 1975, Lee is a former Democratic Progressive Party (DPP) employee and an advocate of human rights in China. He started using WeChat in 2014 to share with friends from mainland China news of Taiwan's transition from an authoritarian state to a democracy. Between 2015 and early 2016, he joined a human rights NGO, Covenants Watch, as a volunteer.

Since February 2016, he has started working for a community university in Taipei city.

Taiwan has been a de facto independent state since 1949 after the Kuomingtang of the Republic of China was defeated by the Chinese Communist Party in the civil war and fled to the island. Yet Beijing has consistently claimed sovereignty over Taiwan and treated the self-ruled state as a rebel region to be united with mainland.

Since Tsai Ing-wen of the pro Taiwan independence DPP won the presidential election last year, Beijing has ceased official communication across the strait. The arrest of Lee Ming-cheh has been widely considered as an example of collateral damage in this new cold war between the two administrations.

Soon after Beijing confirmed Lee Ming Cheh's arrest, Lee Ching-yu, together with a number of civil rights groups, condemned Beijing for holding him incommunicado for undisclosed reasons, and called for his immediate release. Lee’s wife stressed in a press conference on March 30:

Lee Ming-che has shared Taiwan’s democratic experiences with friends through the Internet. He pays attention to human rights issues and spreads hope to people who need warmth. Those behaviors are not criminal in any civilized country.

The Chinese authorities’ detention of a Taiwanese NGO worker on vague national security grounds raises fears the authorities are broadening their attack against those carrying out legitimate activism.

Based on all the available information, it is most likely that the arrest of Lee Ming-cheh by CCP's security department is related to the foreign NGO management law passed in China last year. The law restricts NGOs activities with stipulations such as “cannot violate the country's interest”. Those who have basic knowledge of China's government know that such a framework can be used to restrict all kinds of activities.

The [Chinese] government can assign the label “harmful to state interests” to anyone that it does not like. Lee Ming-cheh has followed China's human rights closely and expressed his view on democracy and freedom openly on WeChat. All these activities can be viewed as “harmful to the the interest of the state” by the CCP.

Taiwanese media worker Tsai Yu-Ching meanwhile worried that the failure of the Taiwanese government to protect its citizen would result in a governance crisis:

Lee Ming-cheh’s wife Lee Ching-Yu has given up assigning a lawyer and traveled to Beijing to rescue her husband. This shows that the communication between the Straits Exchange Foundation and the Mainland Affairs Council, and between the Association for Relations Across the Taiwan Straits and the Taiwan Affairs Office of the State Council of the PRC has been totally cut. There is no official channel to settle the incident, which is why Lee’s family has to give up on official channels and travel to Beijing to find another means to communicate… if the Taiwanese government does not have an effective strategy and continues to handle the case in a bureaucratic manner […] the DPP will not only miss the opportunity to save Lee Ming-cheh — people will lose confidence in the government’s ability to handle cross-strait relations.