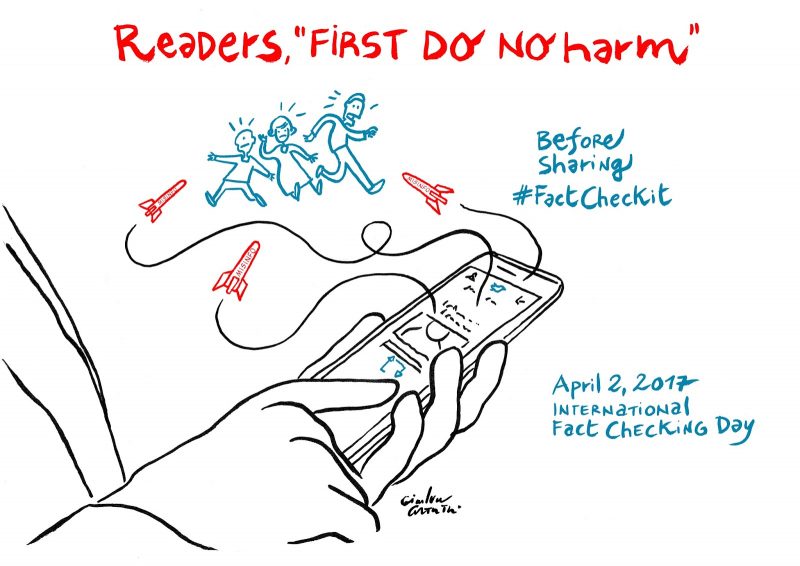 While April 1 celebrates jokes and white lies, April 2 has become a day of sobering up and fact-checking. As of this year, truth-seekers around the world introduced their own holiday — International Fact-Checking Day.

April Fool's Day celebrations possibly have their roots in the Roman Saturnalia, a carnival time when social roles were reversed, and when normally forbidden activities like gambling were allowed. Two thousand years later, it still takes the form of masquerades and a reversal of moral norms, allowing for pranks and harmless lies.

Bill Adair, Professor of Journalism and Public Policy at Duke University, and the creator of PolitiFact, tweeted:

Ten years ago there were a handful of fact-checking sites; today, the world’s 115 sites celebrate Intl. Fact-Checking Day. A great day!

People celebrating the International Fact-Checking Day use the hashtag #FactCheckIt to promote activities which range from public events and workshops to a fake news sprint conducted by PolitiFact.

We celebrate the international day of Fact-checking. Tonight, we check foreign politicians.

Alexios‏ Mantzarlis, the director of the International Fact-Checking Network, has been using his Twitter profile to document and inform about many of the activities related to the day around the globe:

In Braamfontein, @AfricaCheck got students to “vote with their feet” on whether a news story was fake https://t.co/9m9KiklBa1 #FactCheckIt pic.twitter.com/015S20lEOP

Taking into consideration the pressing need to incorporate media literacy and especially fact-checking into the educational system, the members of the fact-checking network prepared a free lesson plan, which has already been translated into 12 languages, with more translations on the way.

Introduce your class to the basics of fact-checking, and help them navigate through an ocean of information, rumors, hoaxes and lies with our lesson plan. The lesson plan was designed by fact-checkers and endorsed by instructional designers. It is conceived for students aged 14-16 but can be used with students of other ages too.