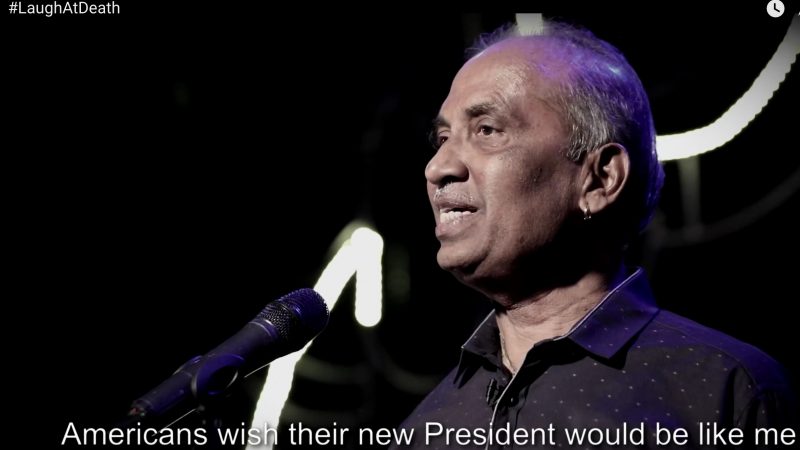 Screenshot from YouTube Video by End Of Life Care India.

Caring for a terminally ill person is a stressful and demanding challenge for any family or loved one. The experience is typically painful and uncomfortable for the patient, as well. The Indian Association of Palliative Care (IAPC) is doing something about this problem, through a campaign to discuss death using humor.

The videos, tagged #LaughAtDeath, are available at YouTube. They feature terminally ill patients performing standup comedy for their families and doctors. The aim is to help very sick people conquer the fear of death.

Talking about death is not a taboo.Accepting it is essential for end-of-life care. Visit https://t.co/Ss6kGBVvsl to know more. #LaughAtDeath pic.twitter.com/M0XEJaTUD9

Palliative care (pronounced pal-lee-uh-tiv) is a specialized medical care for providing a comfortable experience for seriously ill patients and their families. In this process, terminally ill patients are taken out of intensive care units, so they can spend their last few days alive surrounded by their families and loved ones.

IAPC was established in March 1994 as a national forum to connect, support, and motivate individuals and institutions involved in palliative care. The World Health Organization (WHO) and the Indian government provided consultation in setting up the association.

Last year, IAPC commissioned Medulla Communications, an India based healthcare communications agency, to create and run its campaign “#LastWords.” The product, a two-minute video, collects excerpts from interviews with working and retired nurses across the country who had the opportunity to hear the last words of dying patients. The film raises issues about the quality of death people are provided and the dignity of the death specifically in India.

IAPC's latest video campaign, also created by Medulla Communications, was uploaded to Youtube on March 29, 2017. In just a day, the video drew more than 387,000 views. There are already another four videos in the series, and the hashtag #LaughAtDeath briefly trended in India, as Internet users shared the videos.

In the video above, a group of patients urges people to “laugh at death” through their standup performance. The individual chosen to deliver a comedy routine were selected from hundreds of terminally ill patients in the IAPC network. They were then trained by professional standup comedians.

The training paid off. Watching the videos, it's not at all obvious that these dying people are mere amateurs in the comedy world.

Narendra Mhatre, who had a kidney transplant, joked, “Americans wish their new president would be like me. So he doesn't last long”. Sixty-five-year-old Janice Powell said, “This is the first time I am doing this type of a show. Who knows, maybe it's the last time.”

This campaign by Medulla Communications for IAPC will make you #LaughAtDeath. Read: https://t.co/YyumdAdhqQ

Praful Akali, founder and MD of Medulla Communications, said in an interview with Campaign India that “this is not just a campaign but an ongoing project and platform for terminally ill patients to share their stories and spread awareness on palliative care.

Death is the only truth, we have to live with every passing moment of life , doesn't matter happy or sad #life #LaughAtDeath

Is it OK to #LaughAtDeath? Yes! If anyone in ur family is terminally ill, u must! Your family must! And the patient, most definitely MUST!

For many, the videos are bittersweet: full of laughs, but undeniably sad at the same time. Twitter user Ganashan Iyer, for example, wrote:

Just watched #LaughAtDeath video. Very teary. It's indeed a tough thing to cope with a certain death but as they say, zing up every moment!