Led by the Kalipunan ng Damayang Mahihirap (Kadamay), an urban poor organization, and supported by various activist groups, those who taking part in the occupation have put up barricades and held their ground for almost a month already in the face of harassment and threats of eviction by housing authorities and police forces.

Early into the occupation, President Rodrigo Duterte accused the movement of sowing “anarchy” and vowed to use force to evict them from the mass housing units. “If you want to ignore the law, you cannot do that. I will force the issue with eviction,” he said.

“Hold Duterte accountable for his crimes against the poor!” Photo by Paula Sabrine Janer. Used with permission.

Insisting that the occupied households have been vacant and left to rot for years while thousands remain homeless, Kadamay did not back down from their assertion of the right of the poor to avail of free public housing.

After a dialogue by housing officials with Kadamay, the Duterte government backed off from the planned forced eviction of the families, which was scheduled to begin last March 27. Kadamay called this an important victory of the collective struggle of the poor.

Below are some testimonies of the #OccupyBulacan participants in their own words as documented by youth activist group Anakbayan:

I was a renter for 20 years. Because I cannot pay, I accumulated a debt of P2,500 (50 US dollars). I was kicked by the owner. I still have bruises. What more evidence do they need to prove that we are poor?

Look at those houses, they are idle. The grasses have grown tall, the houses are being invaded by soil. Why don't they let the homeless live there? What process do they want?

I always bring my child (female, 5 years old) in every struggle. When gun shots were fired at us back in Muzon I was really afraid. But we are doing this so she has somewhere to go home, because otherwise we'll just be in the streets.

We should stay together, don't lose heart amidst the black propaganda. The house of one, everyone defends. We will not retreat. Those who still don't have a home, we will ensure that they can have one too. We should also ensure order and health.

Why are we called criminals, thieves? Is it not that what is criminal is for the poor to be deprived and stolen of rights? 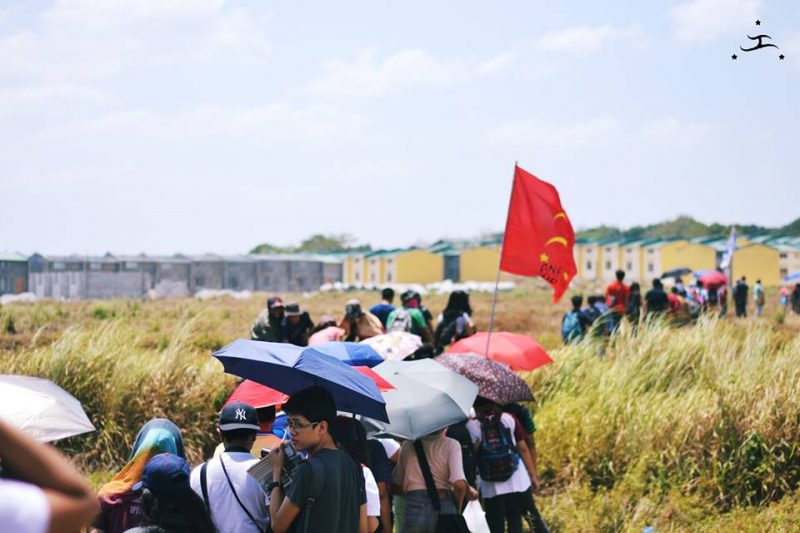 Activist researcher Arnold Padilla questioned Duterte's description of the occupation as “anarchy”, retorting that what is “anarchic” is the fact that 52,341 public housing units have remained unoccupied nationwide while thousands continue to be deprived of decent homes:

These housing units have been unused not because of lack of demand. According to the Housing and Urban Development Coordinating Council (HUDCC), the housing backlog as of December 2016 is pegged at 2.02 million units. From this backlog, the total housing needs is expected to swell to almost 6.80 million units by 2022, growing annually by more than 796,000. Meanwhile, there are more than 1.5 million informal settler families (ISFs) nationwide, of whom 39% are concentrated in Metro Manila, based on government’s latest data.

Independent research group Ibon said the housing crisis in the country has been spawned by a profit-oriented approach that has meant contracting out “socialized” housing to private business rather than providing them free to the homeless:

Despite government and private sector claims, these “socialized” housing units remain unaffordable and unattainable for many informal settlers, said the group. A Bistekville unit, for example, does not require a down payment, but still has an amortization of Php2,273.84 (49 US dollars) per month over a period of 30 years. Many informal settlers are struggling to meet their families’ daily basic needs, and are also ineligible for housing loans from the Home Mutual Development Fund (HMDF) and Pag-IBIG.

Aside from enduring homelessness, poverty, and hunger, the country's urban poor have also bore the brunt of Duterte's “war on drugs” which has victimized and indiscriminately killed without trial more than 7,000 small-time drug users and dealers in the country's sprawling slums.

Kadamay has vowed to continue the fight against an unjust system that has allowed thousands of public houses to be vacant, even as thousands of poor families continue to remain homeless.