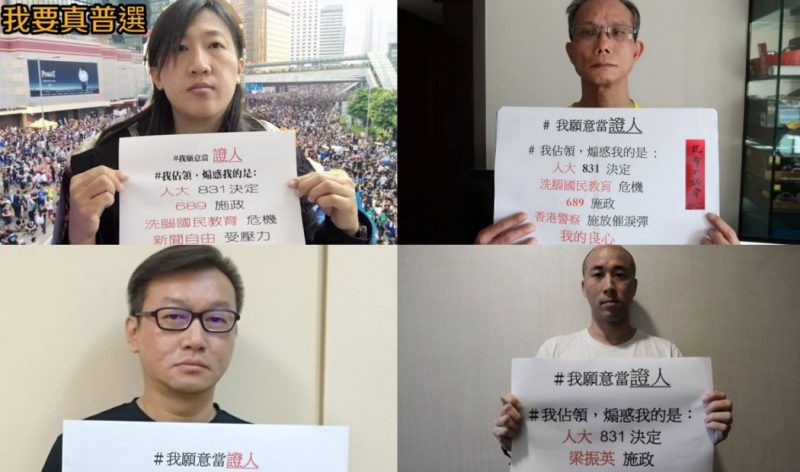 “I am willing to be a defense witness” social media posts. Photo: Jordi Tsang/我願意當證人, via Facebook.

This post was originally written by Ellie Ng and published on Hong Kong Free Press on March 29, 2017. The version below is published on Global Voices as part of a partnership agreement.

A social media campaign titled “As a witness, I was incited by…” has launched to support Hong Kong activists who are facing the charge of inciting others to create a public nuisance over their leadership roles in the 2014 pro-democracy Occupy protests.

The campaign is urging Hong Kongers who participated in the 2014 movement to post a photo or written message on social media saying they are willing to testify in court about why they took to the streets. Many have pointed to police actions for inciting the mass mobilization. One wrote:

I am one of the Occupy protesters and I was incited by the police’s decision to fire 87 rounds of tear gas [at demonstrators].

The pro-democracy protests began on September 27, 2014 and transformed into a massive sit-in in downtown Hong Kong that lasted for 79 days. It was in response to China's National People's Congress determination on August 31, 2014 that only a 1,200-member nominating committee should be able to nominate candidates for Hong Kong's top leader, known as the chief executive. Protesters believed a nominating committee was undemocratic and that the Hong Kong people should have the right to choose their leaders.

One of those charged, Chan Kin-man, said on a Commercial Radio show on March 29, 2017 that he will not plead guilty to the incitement charges.

He said the protest leaders are prepared to accept some charges – such as illegal assembly – if the prosecutor’s case is factually accurate, as a guilty plea would be in keeping with the principle of civil disobedience. He stressed:

But we don’t accept the incitement charge. The UK has abolished the common law offence of incitement, because the law is based on the backward assumption that those incited do not have a free will.

Under the principle of “One Country Two Systems” and “High Degree of Autonomy” written in the Basic Law and Sino-British Joint Declaration, as a former colony of UK, Hong Kong will follow the common law system after handover to China in 1997.

Many believe that the prosecution is political in nature as the so-called illegal act happened more than two years ago. This is not the first time the police charged 2014 protest organizers for incitement. Last year, student activist Nathan Law Kwun-chung was convicted of inciting others to take part in an unlawful assembly on September 26, 2014 outside the government building. The protest was a key event that sparked the massive pro-democracy sit-in protests. While the court had spared him from jail time, Law is currently appealing his case.

In response to the prosecution, pro-democracy supporters took to social media expressing their willingness to testify about what “incited” them to join the Occupy movement.

An activist said on Facebook she participated in the protests throughout the 79 days to voice her opposition to alleged abuses of power by police and Beijing’s decision, among other reasons:

On September 27, 2014, to express my discontent about the decision by the National People's Congress on August 31, I was incited to participate in the peaceful sit-in demanding the government to react to our demand; between September 28 and December 10, I occasionally joined the sit-in at the protest sites demanding the government to respond; I became a volunteer first aid team member offering medical assistance to citizens who were involuntarily sprayed by police with pepper spray or beat with police batons. On December 11, I voluntarily joined the Admiralty sit-in and was arrested.

All the above actions were taken on voluntary basis. No one incited me. What incited me was the August 31 National People's Congress decision, the governance of 689 [a nickname for current Chief Executive Leung Chun-ying), the brain-washing education [referring to the potential implementation of a “national education” curriculum in Hong Kong that would foster Chinese patriotism], the suppression of a free press. All the actions were taken with a hope of constructing a democratic, just and clean society for the next generation.

Meanwhile, blogger and former law clerk Charles Tsang suggested that people testify in court about how the Occupy protests did not create a nuisance for them:

Apart from them arresting everyone of us, another way [to protest against the prosecution] is for everyone be a witness.

According to common law, the term “public nuisance” is different from what is written on Offences Ordinance. The prosecutor has to prove that the nuisance has caused common injury, such as a traffic jam.

I am happy to testify that during Occupy, it took me only 20 minutes to walk from my office in Central to the District Court in Wan Chai – even though I was wearing a suit and carrying a suitcase of legal documents. It would be impossible with normal traffic.

The nine leaders facing charges appeared before the Eastern Magistrates’ Courts on March 30. They will then stand trial at the District Court at a later date.

Local media cited sources as saying that as many as 39 people involved in the Occupy protests will soon face similar charges.