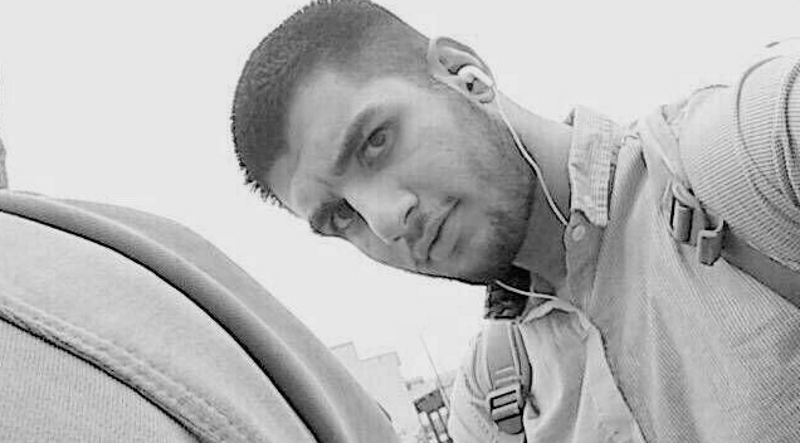 Sina Dehghan faces execution over his posts critical of Islam that he published in public online channels at the age of 19. Image shared widely on social media.

While governments around the world deploy advanced surveillance tactics to monitor the communications of potential terrorists, the Iranian government goes after those who “terrorize” the sanctity of the Islamic regime on digital communication platforms.

Sina Dehghan, a 21-year-old former soldier, has experienced this firsthand. He was arrested in 2015 for his social media posts. He was convicted and sentenced to death, and is now awaiting his fate.

At the age of 19, Dehghan was completing his mandatory military service in the Tehran army barracks when the Revolutionary Guards, a hardline wing of Iran’s armed forces that is accountable to the office of the Supreme Leader, arrested him over a series of public messages he had posted on the messaging platform LINE. A source told the Center for Human Rights in Iran that his posts were against Islam and the Quran.

He was arrested alongside two others, Sahar Eliasi and Mohammad Nouri, who authorities said collaborated with Dehghan in the posts. All three were found guilty of participating in social media channels that insulted or criticized Islam. Eliasi's sentence was reduced to three years upon appeal and Nouri is still awaiting his sentence. Dehghan's death sentence was confirmed by Iran's Supreme Court in late January 2017.

The case against Dehghan rests on a confession that he was pressured to give under false pretenses. Upon his arrest, the Revolutionary Guards deceived Dehghan by telling him if he confessed to the charge of “insulting” the Prophet Mohammad and signed a letter of repentance, he would be set free.

The Revolutionary Guards deceived Dehghan by telling him if he confessed to the charge of “insulting” the Prophet Mohammad and signed a letter of repentance, he would be set free.

Iran's Islamic Penal Code, which criminalises dissent and criticism, states in Article 262 that insulting the Prophet is a crime punishable by death. However, Article 263 of the code says that the accused can have their sentence reduced to 74 lashings if they tell the court the insults were the result of anger or a mistake.

Neither Dehghan's forced confession nor his lawyer allowed him to take advantage of Article 263. Dehghan's family could not afford proper representation, so he received a court-appointed attorney, who the Center for Human Rights in Iran says failed to defend him properly during his trial.

To further complicate Dehghan's unjust situation, a source who requested anonymity for security reasons told supporters that security and judicial authorities promised his family that if they refrained from publicizing his case, Dehghan would have a better chance of being set free. As of late March, with little hope of the January sentence being overturned, Iranians both inside and out of the country have started calling for authorities to spare his life.

#Sina_Dehghan is sentenced to death for posting “Anti-Islamic” content on Social Media in Iran. We must #SaveSina pic.twitter.com/J9Bmc3OrRc

Dehghan's case is particularly tragic as both he and his family had dedicated much effort to the country's military. His grandfather was a “martyr” (or fallen soldier) of the Iran-Iraq war, while Dehghan had served two years in the Iranian military.

Sina's grandfather was a martyr of the eight-year war. Sina himself served two years. Sina has more rights to this country than most of these authorities.

Dehghan's case is a sobering reminder of the security threats Iranians face online. While keeping private communications safe from the government is often considered a person's main defence, a person's public image and words can also make them vulnerable to the ire of an unjust criminal system.

Even the strongest encryption in the world can't protect an Iranian from being penalized for exercising free speech online.