Her victory was met with protests by pro-democracy activists. 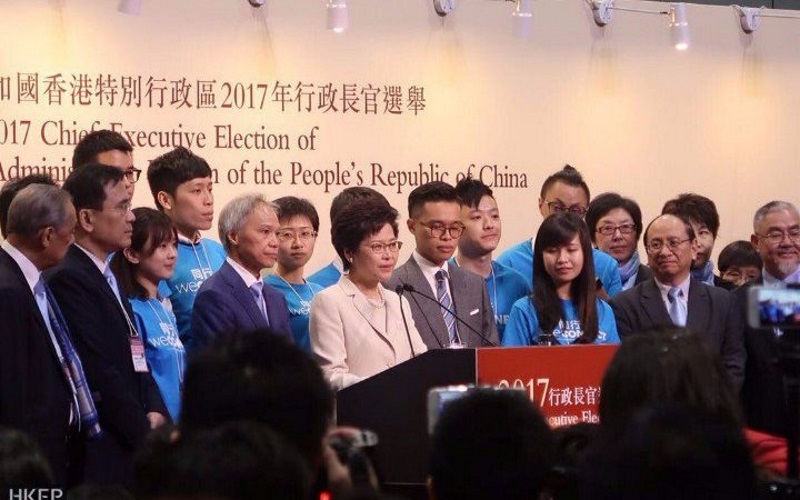 This post was is a compilation of various stories by Elson Tong, Ellie Ng and Catherine Lai that were originally published on Hong Kong Free Press on March 26, 2017. The version below is published on Global Voices as part of a partnership agreement.

Reports indicated that Lam was the only candidate that Beijing deemed acceptable and that the China Liaison Office – Beijing’s representative in the special administrative region of Hong Kong – along with some senior Chinese officials had been asking electoral committee members to vote for her.

Lam, 59, was the city’s number two official before joining the chief executive race. She suffered low popularity ratings throughout her campaign, with critics calling her a copy of current Chief Executive Leung Chun-ying and warning that she would adopt Leung’s “combative” approach to governance.

In 2014, she promoted a Beijing-backed political reform package, which while allowing Hong Kong people to vote universally in the chief executive election would have restricted the right to nominate the candidates to a 1,200-member nominating committee, leading to two months of massive street protests calling for genuine election reform.

Lam has promised to try to build consensus and “restore faith and hope” in Hong Kong, which enjoys a high degree of autonomy from the mainland, and “strengthen the relationship between Hong Kong and China”.

She stressed in her victory speech:

Hong Kong, our home, is suffering from quite a serious divisiveness and has accumulated a lot of frustration. My priority will be to heal the divide and to ease the frustration – and to unite our society to move forward.

The agenda of healing the divide had been advocated by John Tsang, the more popular candidate, during his election campaign. Picking up the agenda, Carrie Lam stressed:

I also want to stress: in forming my governance team, my principle is to attract talent widely and on merit. Anyone with a sincere wish to serve, the ability, and the commitment, regardless of political affiliation, I shall invite to join my team.

I will tell every member of my team to listen to and work with the people in reaching collective decisions and taking action. Only in this way will we achieve real consensus and gain the widest support from society.

She vowed to safeguard the city’s core values:

Values such as inclusiveness, freedoms of the press and of speech, respect for human rights, and systems which have taken generations to establish, such as the independent judiciary, rule of law, and clean government, are matters that we Hong Kong people find precious and are proud of. As your Chief Executive, I shall do my utmost to uphold “one country, two systems” and to guard our core values.

Questioned about the fear of Beijing intervening in Hong Kong's internal affairs, Lam said she would be brave enough to speak up for Hong Kongers, as long as something is for the good of Hong Kong.

She said she was “deeply honoured” to become the first female chief executive and stressed that gender equality was necessary for stable development.

Protests inside and outside the election center 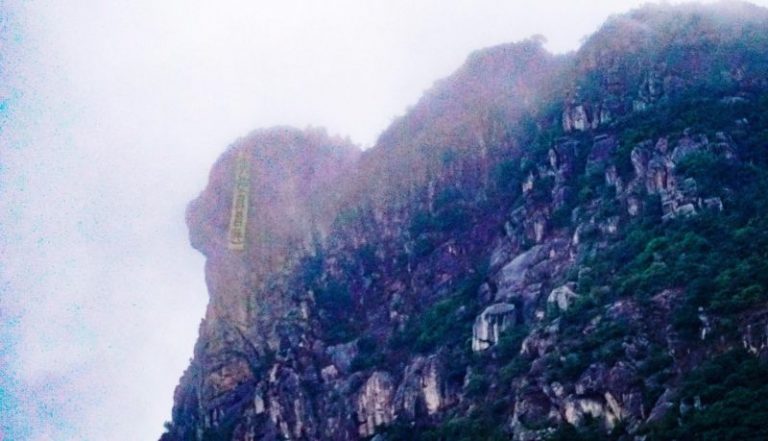 Inside the voting center in Wanchai, a few pro-democracy election committee members cast blank ballots or spoiled their ballots as an act of protest. One of the spoiled ballots was marked with the profanity “f**k” in Chinese and projected on a huge screen during the vote count, creating an uproar inside and outside the center and on social media. 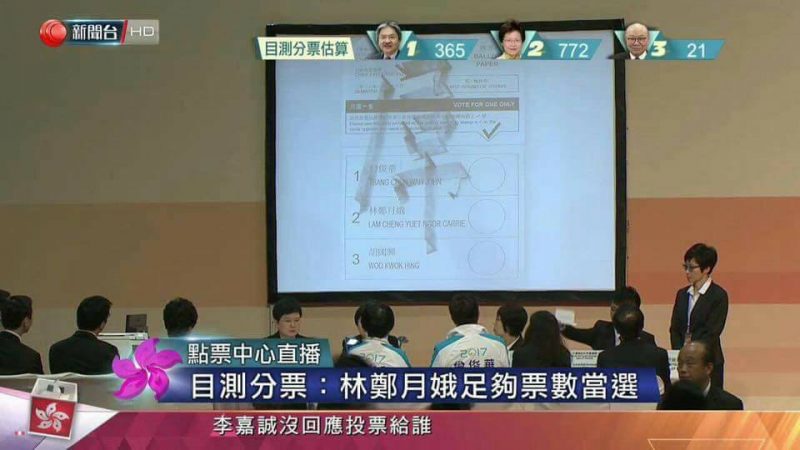 Outside the voting center, pro-Beijing and pro-democracy protesters were locked in a standoff. 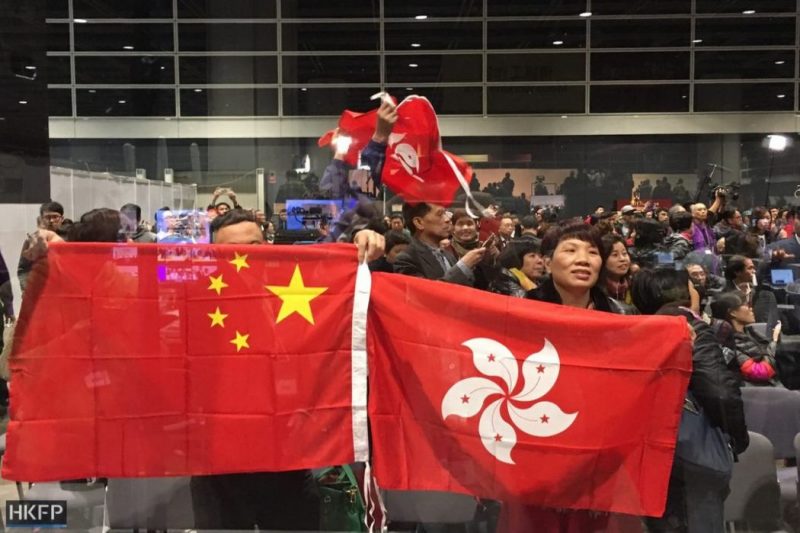 Pro-democracy activists, on the other hand, shouted their criticisms of the small-circle election system and Beijing's meddling in the votes. After the election result was announced, some activists moved to the China Liaison Office and hurled toilet paper at the building — a reference to Lam, who in January received international media attention after disclosing that she took a taxi at midnight from her new luxury apartment to her old government house because she did not know where to fetch toilet paper rolls. 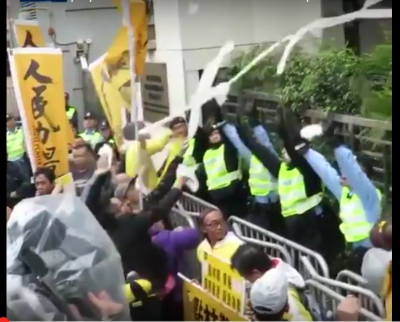 As the Cantonese word for “seven” is phonetically similar to an obscene word meaning “penis” and could also mean “stupidity” or a “blunder” when used as a verb or an adjective, the 777 votes Carrie Lam received has inspired puns and jokes.

Of course, the number 777 can also mean jackpot in gambling.

Next up for Carrie Lam

The elected chief executive will tour local districts, as well as visit the incumbent leader Leung Chun-ying, the secretary of justice, the legislature and the three Chinese government offices in Hong Kong as part of protocol. The three offices include: the Central Liaison Office, the city’s the Ministry of Foreign Affairs office, and the local headquarters of the People’s Liberation Army.

During her tenure, she was heavily criticised for failing to serve the interests of the underprivileged during her office as director of social welfare, and for allegedly committing misconduct in public office in the controversy surrounding the Hong Kong Palace Museum project.