In Kyrgyzstan, Media Facing Pressure from a Fearful President 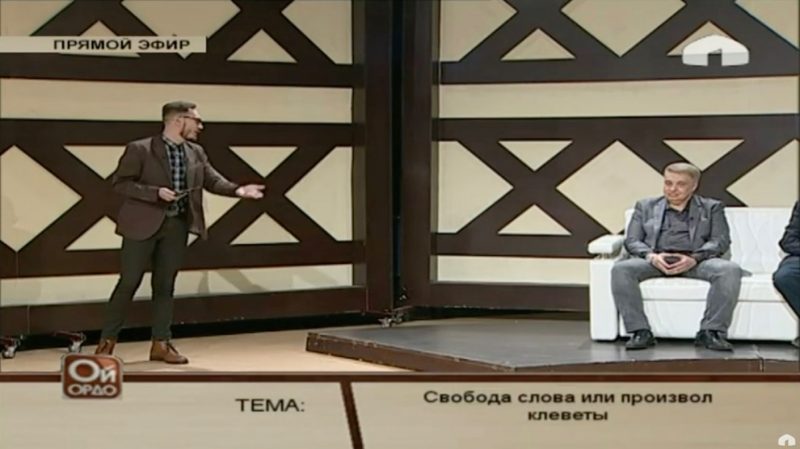 During a recent episode of the Oi Ordo talk show titled ‘Freedom of Speech or Slander?’, moderator Maxim Poletayev regularly interrupted independent media experts offering their opinion on the situation regarding press freedoms in Kyrgyzstan, while listening dutifully to the government's own representative on the show.

Many social media users commenting on the discussion broadcast on Kyrgyzstan's main state television channel saw the host's behaviour as a telling representation of the government's approach to media freedoms: you can say something for as long as the government doesn't mind what it is you are saying.

Presently three news agencies are being sued by the state prosecutor, simply for carrying quotes attributed to critics of the President Almazbek Atambayev and his Social Democratic Party of Kyrgyzstan. The prosecutor's argument is that the quotes themselves are “slander” and damage the “honour and dignity” of President Almazbek Atambayev. As such, the prosecutor says, the media outlets carry responsibility for relaying them.

The three media outlets, which also happen to be the outlets most critical of the government, are facing fines ranging from $15,000 to $150,000, and two of them have had their bank accounts frozen by authorities ahead of the court cases.

Media experts argue that the Central Asian country's law on media shields journalists from responsibility for the accuracy of information in their reports. In practice however, journalists can be sued under far vaguer libel laws, and the profusion of such cases threatens to increase self-censorship in reporting.

That President Atambayev has regularly slandered journalists and human rights activists throughout his six-year term and has not yet been successfully sued for doing so is an indicator of the kind of judicial bias the media outlets will be up against as the cases reach court.

We didn't say it, they did…

As noted, in all bar one of the cases, the outlets were simply relaying accusations against the president and his party made by their interviewees.

Among those accusations were:

Buckle up, its election time!

Like United States President Donald Trump, Atambayev has repeatedly castigated critical media outlets for their reporting, accusing them of spreading misinformation and serving the interests of foreign governments and donors.

Some have pointed in irony to the fact that when Atambayev himself was a repressed opposition figure prior to the second Kyrgyz revolution in 2010, he lauded congress-funded Azattyk as one of the few outlets reporting critically on the authoritarian Bakiyev government.

Now that Atambayev is in control of the government apparatus, a popular news agency that enjoys a reputation for independent reporting inside the country as well as a steady stream of state department funding is far less useful to him.

More curious than his attacks on regularly critical outlets, perhaps, is the recent deportation of the editor of the local branch of the outlet Regnum.ru, a Moscow-headquartered news agency cited by critics as a regular source of propaganda for Atambayev's allies in the Russian government.

Throughout a stormy presidency, Russian backing has been vital for Atambayev in securing legitimacy among a population that is largely Russia-friendly, a fact that makes the decision to deny Grigory Mikhailov re-entry into the country following a minor labour code violation a source of conjecture.

One of the articles Kyrgyz social media users speculated may have contributed to Mikhailov's ban on entering the country cited the opposition's demand that Atambayev undergo psychiatric testing following particularly rude comments he had made about the Ata-Meken party.

Another was a lengthy interview with a wealthy politician that many view as the frontrunner to succeed Atambayev in elections this November, but who is probably not his preferred candidate for the job.

In comparison with the highly authoritarian countries in its ex-Soviet neighbourhood, as well as next-door neighbour China, Kyrgyzstan is only a moderate enemy of the free press.

But as Atambayev contemplates ways of securing his retirement beyond a vote he is constitutionally barred from entering in eight months time, independent media is enduring an extremely bumpy ride.