Searching for Justice, This Catholic Church Worker Documents Drug Killings in the Philippines 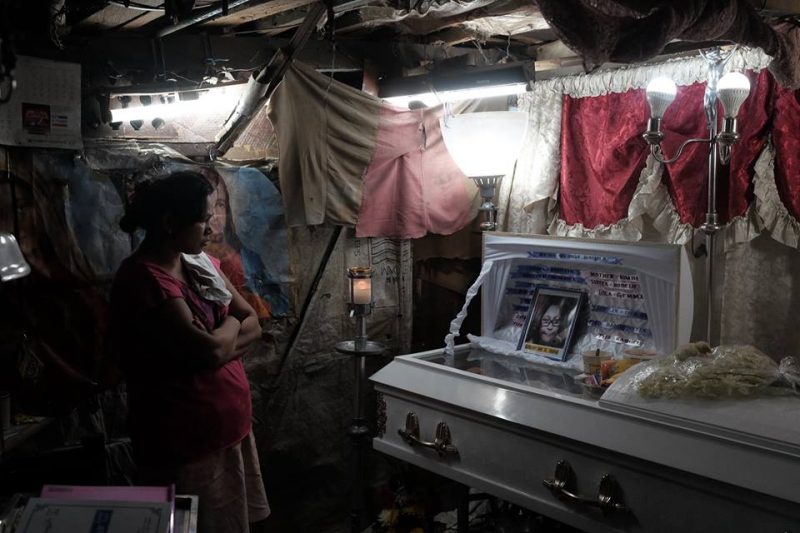 Majority of the victims of tokhang (anti-drug operation) are urban poor residents. Photo by Ciriaco Santiago, used with permission.

Ciriaco Santiago may look like an ordinary missionary in Manila’s Baclaran Church but he's also a nightcrawler photographer who joins other journalists in covering the lethal anti-drug operations of the Philippine police.

According to police records, more than 2,000 have been killed in the anti-drug operations from June to December 2016. But some groups fear that the number could be higher if extrajudicial killings are included.

If the job of the media is to report the latest casualties in the government’s ‘war on drugs’, Santiago’s role is to profile the victims and document the anti-drug operation or tokhang extra-judicial killing to be used in future human rights abuse investigations.

In an interview with Vatican Insider, Santiago explained why it’s important to expose the violations of the drug war:

Letting the world know about this legalized barbarism is a humanitarian work, before it being news. Raise public awareness about the flagrant violations of law and legality and to stop the killing. Journalism can really serve the public interest and work for the common good.

Santiago’s work has been featured in several exhibitions in churches and schools. The Rise-Up human rights network also submitted his photos as evidence of possible police involvement in extrajudicial killings which has mainly targeted the urban poor of metro Manila, the capital of the Philippines.

The drug war became a national issue in 2016 when the country’s newly elected president vowed to end the menace by killing the leaders of drug cartels and their protectors.

In many instances, innocent civilians have been killed in the tokhang operations. The police are accused of killing unarmed suspects and other petty drug personalities but authorities have blamed this on drug cartels which are allegedly liquidating their rival gangs. 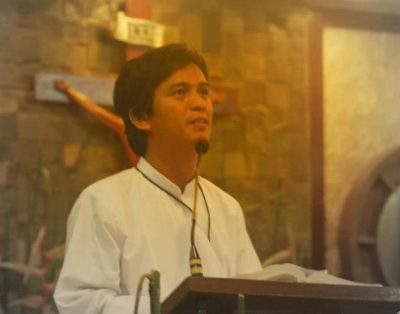 Santiago, who is the crisis management coordinator of his church, began his documentation work last December 2016 in response to the growing number of cases and complaints involving urban poor parishioners.

During one of his visits in urban poor communities, Santiago learned about the case of teenagers who were killed by a group of masked men. Community leaders attested that the teenagers were not involved in illegal drug trade. Many also believe that the killing could be a tokhang operation.

Santiago wrote about the story of the teenagers and documented the funeral march:

They had dreams. All of them wanted to finish their studies, hoping that they would get better jobs once equipped with formal trainings.

Because of poverty, they had to work and save for it. They were firm with the resolve to study, no matter how long it takes.

But that dream vanished that fateful night, as well as the village’s peaceful environment.

The wake was short. The victims’ families and relatives cannot afford a decent burial for their dead. Their option was to bury them all together – alongside with each other. 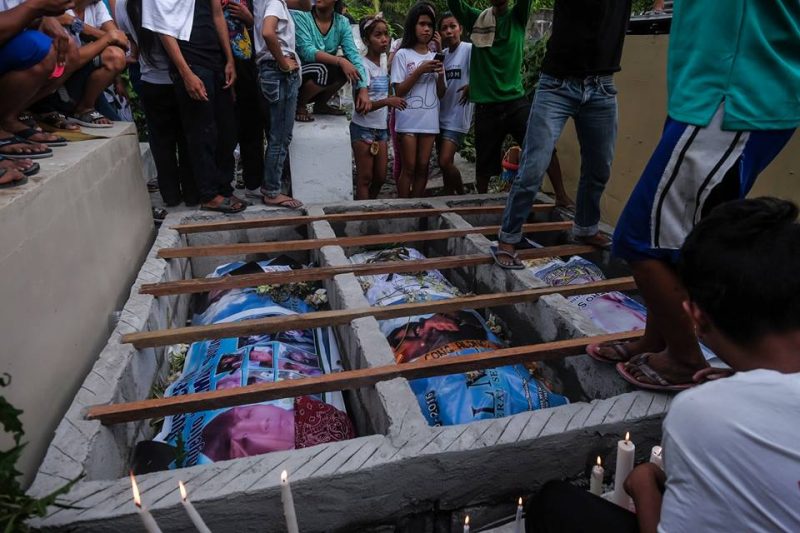 Teenagers who were killed in a tokhang-like operation were buried alongisde each other to save cost. Community leaders attest to the innocence of the teenagers. Photo by Ciriaco Santiago, used with permission.

Santiago’s work complements the reports of mainstream journalists in giving face to the victims of tokhang and the alarming impact of the drug war in urban poor communities.

Santiago is encouraging young photographers to shed light on the situation of the poor, especially those who are affected by the government’s drug war:

As a photojournalist, always be with the poor, understand their social reality. There is always a clash of competing class interests, with that be on the side of the struggling and poor people.

Below are some photos taken by Santiago, which show what tokhang means to ordinary Filipinos in urban poor villages: 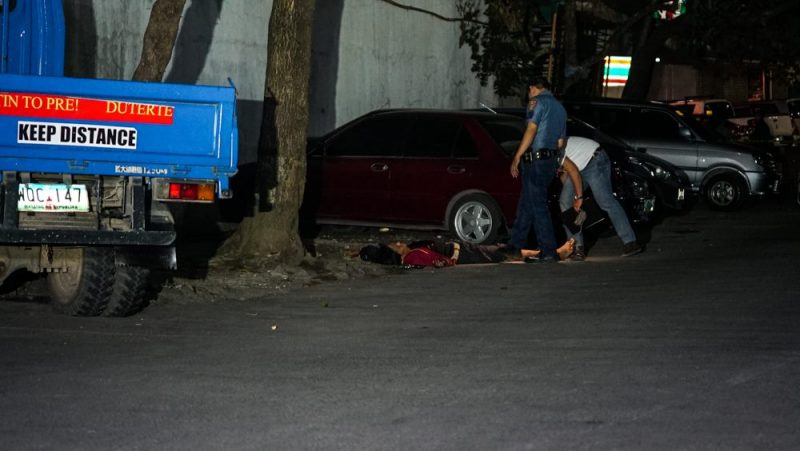 A police officers looks into the dead body of a probable drug suspect. Near the body is a truck with a signage bearing the slogan and name of the country's president. Photo by Ciriaco Santiago, used with permission. 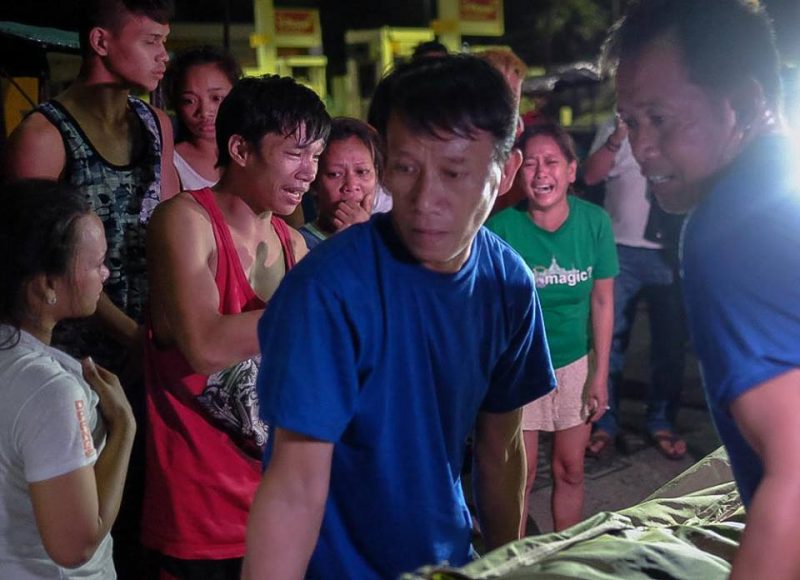 The body of a tokhang victim is carried away in front of a grieving family. Photo by Ciriaco Santiago, used with permission. 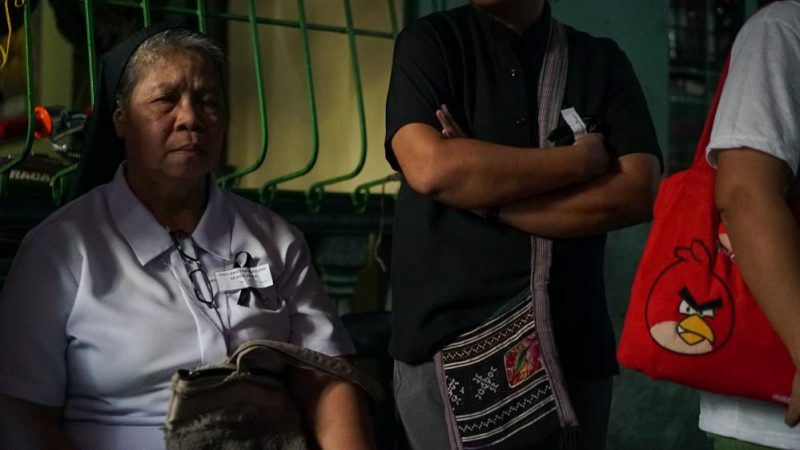 The religious sector has been reaching out to tokhang victims in order to probe and stop the drug-related killings in the country. Photo by Ciriaco Santiago, used with permission.