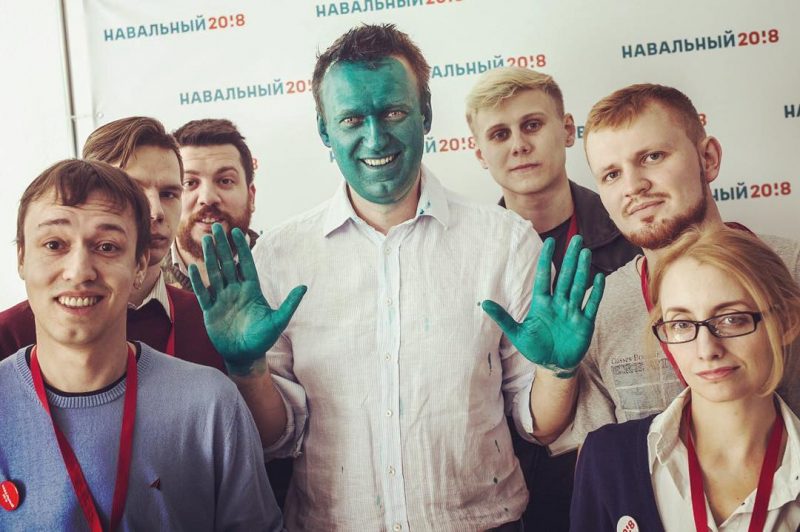 Alexey Navalny after being sprayed with green paint by a critic who ran away. Photo: Instagram

The subject of Navalny’s most recent report is Prime Minister Dmitry Medvedev, who sits at the helm of a vast network of illicitly acquired real estate, according to the Anti-Corruption Foundation. On YouTube, a video presentation of the report has nearly 11 million views.

This Sunday, March 26, Navalny is organizing a nationwide protest against corruption at the highest levels of government. At the time of this writing, demonstrations are planned in 100 Russian cities, plus another two abroad, in London and Prague. Judging by RSVPs on social media, this weekend promises to be a display of Navalny’s mobilizing skills, and a test of how widely his message of anti-corruption appeals to Russians.

There’s a problem with this movement, however, and it’s that officials in most Russian cities have refused to grant demonstration permits to the local activists organizing the protests.

People request a permit, specifying a time, location, and crowd size, and the authorities say no, offering no alternatives.

This, Navalny says, is illegal, and he’s doing something about it.

Navalny at a presidential campaign rally in Kazan on March 5, 2017.

Meet “RosEvroSud” (Russian Euro Court), Navalny’s latest project, designed to facilitate appeals to the European Court of Human Rights. In a blog post on Wednesday, he announced that he’s making the service available to anyone detained at this Sunday’s anti-corruption protests, which he insists are lawful assemblies, where local officials refused to offer demonstrators alternatives when rejecting permits.

The service is available to anyone who’s detained, taken to court, and fined. Individuals are first required to appeal the fine in a Russian court (a process Navalny says is relatively perfunctory), and RosEvroSud handles the rest.

In the past, the group says it has filed 55 appeals with the EHCR, winning 12 cases, with another 29 still in progress. Navalny has personally won several of these appeals, receiving thousands of euros from the Russian government in compensation for moral damages and legal expenses.

Citing a successful appeal by RosEvroSud on activist Igor Tarasov’s behalf, Navalny implies that coming out this Sunday to demonstrate against corruption could net as much as 10,000 euros for each person wrongly detained and fined.

“If you’re detained, then you’re also going to make some money,” he promised bluntly in a message to supporters.

“There’s no need to be scared,” he added. “Cowards get scared.”