Is Jamaica Preventing Cybercrime or Cyber Activism? The Tambourine Army Goes to Court

The Tambourine Army is a new movement for justice in Jamaica led by sexual violence survivors. 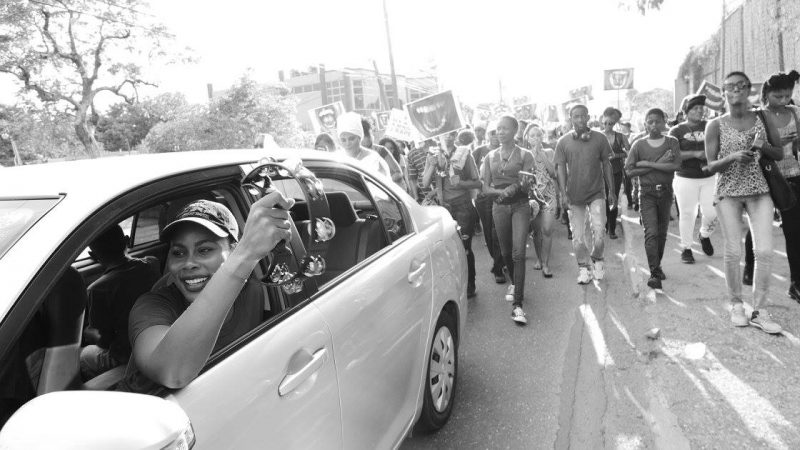 As Latoya Nugent, one of the founders of Jamaica's new Tambourine Army movement, made her way to court on March 22, 2017, public attention turned towards the reach of The Cybercrimes Act, with many asking whether the effort to prevent cybercrime is curbing cyberactivism.

Nugent's Tambourine Army is “a radical movement that was formed organically out of an urgent recognition to advocate differently for the rights of women and girls”. The main bone of contention is the Army's controversial tactic of encouraging survivors of sexual abuse to name their perpetrators with the hashtag #SayTheirNames, before the perpetrators have gone before a judge. Nugent was charged on three counts of “the use of computer for malicious communication”–under the country's Cybercrimes Act–for identifying several men as sexual predators on social media, some of whom lodged formal complaints with the police.

The Tambourine Army movement is led by survivors like Nugent and was triggered earlier this year by revelations of child sexual abuse by Moravian Church pastor Paul Gardner. The Army's supporters say their radical tactic of naming and shaming is essential because Jamaica's sexual violence and domestic abuse laws–including the Sexual Offences Act of 2009 –place disproportionate burden on the victim, and because rape and abuse are already massively underreported because of a culture of victim-shaming and stigma.

The State seems to be more interested in silencing the #TambourineArmy than they are on catching perpetrators of sexual violence.

The case against Nugent is complicated

Like many cybercrime laws in other countries, Jamaica's legislation is vaguely worded when it comes to “malicious” communication. Offline, naming alleged perpetrators who have not had their day in court is an issue that would be dealt with under defamation laws. But in 2013, Jamaica reformed its defamation regime to be treated as a matter of civil — not criminal — law. This means that anyone convicted of defamation in Jamaica can be made to pay for any damage done to the person's reputation, but will not serve time.

When Nugent appeared in court, she learned that her bail would be extended because the Director of Public Prosecutions (DPP) has taken an interest in the case and needs more time to review the files. Nugent's next court appearance will be on March 31. The DPP is expected to be present.

Blogger and internet activist Ingrid Riley called on social media users to “get ready to become involved when the [Cybercrimes] Act comes up for review next year.” Riley noted:

The arrest of Tambourine Army co-founder Latoya Nugent speaks volumes. It says, how dare you host such a march? How dare you decide to speak? How dare you seek change when change isn’t needed. You should be raped, violated and abused, for rape culture has no end!

It is not being said in those words, of course. But the arrest of Latoya Nugent, who has been charged with the use of a computer for malicious communication under the Cyber Crime Act, after naming an alleged sex offender, is telling me just that!

I am told to be silent, for my voice has no power or place in this country. Because if I do speak out, or fight to protect my person, the State will be coming for me.

The justice system in Jamaica is “creaking”

On its Facebook page, the Tambourine Army linked to an article by the respected UK barrister Lord Anthony Gifford, who admitted that the case against Nugent “has raised constitutional issues that are fascinating for a human-rights lawyer to disentangle.” Gifford distilled the situation into three simple issues: that victims “are fed up with pious talk that has changed nothing”; that citizens have the right to free speech; and that while people are innocent until proven guilty, the justice system in Jamaica “is creaking” and making the path to justice “intolerable”.

Addressing the language of the cybercrime legislation, Gifford noted that “it was clearly designed to punish trolls and stalkers who use threats and obscene language to menace the vulnerable, and particularly women.” While acknowledging that he did not know the details of Nugent's case, Gifford concluded:

…making threats through social media is a criminal offence, and justifiably so, but simply making accusations is not. In interpreting the meaning of the new act, the courts must ensure that the right to freedom of expression is upheld.

….why is alleged libel on social media a police matter rather than a civil one as libel normally is […]? Because libel via computer is deemed a criminal offence in Jamaica rather than a civil one It has alarming implications for freedom of speech. For example @latoyanugent of the #TambourineArmy was arrested by the Counter-Terrorism and Organised Crime Investigation Branch. Doesn’t this strike you as overkill? Isn’t this perhaps designed to serve as a warning to civil society and those who comment in online forums? Doesn't this represent a direct threat to freedom of speech?

In an article for the Jamaica Gleaner, Paul wrote that the #SayTheirNames hashtag is not about “women demanding the right to falsely accuse men of raping them”, but rather about “facilitating the empowerment of survivors and placing it squarely at the feet of perpetrators.” Echoing Lord Gifford's point about the many instances of justice denied to victims of sexual abuse, Paul asked, “Why then the moral panic about the mere possibility of libel in cyberspace? And why is there not [an] outcry about the out-of-control rape culture here?”

The Press Association of Jamaica (PAJ) has also spoken out on the legislation angle, calling on Parliament to stand by its position on criminal defamation:

Freedom of expression is a fundamental right that, like many others, is subject to restrictions. Those restrictions include the law of defamation to protect the reputations of others. These are matters for the civil courts. […]

However, criminal defamation laws that penalise statements that injure reputation are understood by freedom of expression advocates all over the world to be an enemy of freedom of expression, to have a chilling effect on free speech, and to facilitate the repression of criticism by governments. […]

Making arrests for what are essentially matters for the civil courts places Jamaica on a steep, slippery slope where freedom of expression is at risk. We do not believe this was the intention of the legislature.

Activists Caribbean-wide are making their voices heard with regard to free speech restrictions that fall under the umbrella of overly broad cybercrime laws. Code Red posted a statement of solidarity on its blog:

What happened to Latoya is not specific to Jamaica. Across the Caribbean region, we see an increasing attempt to enact cyber crime and repressive legislation that fails to protect the most vulnerable and the most marginalized in our communities; and instead attempts to silence and criminalize dissent and human rights organizing. […]

We recognize that the internet is often used as a space for human rights defenders to disseminate information, organize, advocate and mobilize. Accordingly, what we need are digital security frameworks that not only centre, but that protect, human rights. […]

We are all impacted by Latoya’s arrest. As democratic spaces across the Caribbean region continue to shrink, in addition to being accompanied by increasing police and state surveillance and repression, we recognize the urgency and necessity of maintaining spaces for civil disobedience and organizing. We demand that our fundamental human right to resist and mobilize be respected. And we call upon the government of Jamaica, specifically the Director of Public Prosecutions Paula Llewellyn who has taken an interest in this case, to drop all charges against Latoya Nugent.