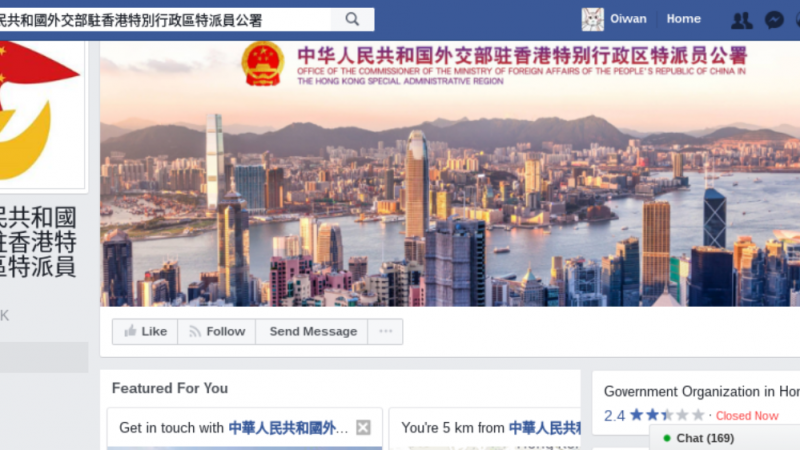 This post was written by Elson Tong and originally published by Hong Kong Free Press on March 22, 2017. The edited version below is published as part of a partnership agreement.

The Chinese Foreign Ministry’s branch in Hong Kong has opened an official Facebook page, leading internet users in the autonomous region to flood the page with angry comments. The giant social network is censored in mainland China, but not in its special administrative regions Hong Kong and Macau.

On March 21, the Office of the Commissioner of the Ministry of Foreign Affairs in Hong Kong held a launch ceremony and pressed a button that uploaded this first post in the Cantonese-language:

Well, what is our responsibility exactly? Hong Kong implements ‘One Country Two Systems’ – we believe everyone knows this – and the country has a foreign ministry to take care of state-to-state relations. Well, Hong Kong is not a country, so we take care of Hong Kong-related diplomatic matters. That’s why we exist.

Some users mocked the page for using the Cantonese possessive particle geh (嘅) instead of gaa (噶). “Why don’t you hire a Hongkonger as an editor?” asked one commenter.

According to the “one country, two systems” principle underwritten in the Sino-British Joint Declaration and the city's Basic Law, when Hong Kong was handed back to the people of China from the UK, the city's capitalist system and its way of life would remain unchanged at least for 50 years until 2047. But Beijing has been showing signs of impatience in recent years, encroaching more and more on Hong Kong's internal affairs, by reinterpreting Basic Law to restrict the election reform and by disqualifying elected pro-independence lawmakers, as well as exercising informal political pressure to intervene in elections, government policy and official appointment.

Despite receiving fewer than 1,000 likes within a day of its launch, the page has received hundreds of comments, mostly in protest. Some commenters called on Beijing to cease its rumoured support for chief executive candidate Carrie Lam, or to prosecute incumbent leader Leung Chun-ying and his alleged Chinese government backers.

On March 26, 1200-member election committee will elect the city's top leader. The three candidates are ex-chief secretary Carrie Lam, ex-financial chief secretary John Tsang and ex-judge Woo Kwok Hing. But there have been talks among pro-Beijing election committee members that Carrie Lam is Beijing's only acceptable candidate. Many believe that Carrie Lam is backed by the China Liaison Office and the current Chief Executive Leung Chun Ying, who is caught in a misconduct scandal for having failed to declare his HK$50 million deal with Australian firm UGL.

Others told the ministry to “go back to Weibo,” given that Facebook is blocked in the mainland.

Fb is blocked in China, go home… stick to your own fakes.

Facebook is a foreign power. Chinese using Facebook are definitely traitors, they must have been sponsored by the U.S.

The powerful country prohibits FB
If you love the country, obey China and use Weibo and QQ.

Rescind the decision of the National People’s Congress, implement democratic universal suffrage, the Chinese Communist Party must stop its oppression!

Some Facebook users were more welcoming. For example one of the page review said:

It is good to communicate with Hong Kong citizens directly. The Liaison Office is a kingdom claiming to represent the state, it has become an interest block and it has prioritized its interest at the expense of the state. Those who suddenly transformed into patriots after the return of Hong Kong to China and those who keep exaggerating the opposition force in Hong Kong in order to obtain resources and power. The more Hong Kong is torn apart, the more interest they would gain. Most Hong Kong people desire social unity and harmony. They just want rule of law and liberty. The fate of China and Hong Kong is interconnected. Please take a closer look at the reality here.

This is not the first time the Chinese government has set up an official page on Facebook. In September 2015, the government set up a Facebook page for President Xi Jinping to coincide with his visit to the United States. The page – named “Xi’s Visit” – has documented his activities in English ever since.