Woman in Mexico Copes With Sister's Femicide by Fighting the Patriarchy 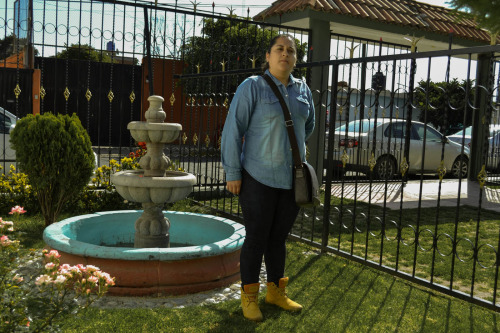 This article was originally published by Yenn in Voces de Mujeres (Women's Voices) and is republished in Global Voices with the author's permission.

Nadia Muciño was murdered by her husband, Bernardo, and her brother-in-law, el Matute (the Smuggler) on February 12, 2004. At twenty-four, she left behind her sons, Carlos and José, her daughter, Fernanda, her parents, friends, and siblings. This, however, is not her story. This is the story of her youngest sister, Viviana, who lived through her sister's femicide — a form of violence that's now terrorizing women throughout the State of Mexico.

Last February, Viviana abandoned her undergraduate studies and her dream of becoming a chef for financial reasons. Her son, Jaciel, had recently turned two years old, and she had to work to support him.

On the day of Nadia's murder, Viviana suffered severe pain in her abdomen that spread throughout her body. That morning, she went to the market. On the way, she saw her brother-in-law, Bernardo, on a bus headed for the Toreo metro station. Shortly afterwards, she made her way to the city to submit an assignment.

On her way home, she realized that Bernardo's bus was being driven by somebody else. She found it strange and when she arrived home at around 8 p.m., it dawned on her that only her brothers and sisters were there — her mother, Antonia, was absent. Half an hour later, Antonia came home and, bewildered, explained what had happened to Nadia. Viviana wanted to go to see her sister but her mother stopped her.

She wouldn't let me go to her house. I didn't see her again until I said goodbye at a vigil they held for her.

Before closing the casket, Viviana placed a photograph of herself with Jaciel and some of those colored thread bracelets they liked so much.

Along with Antonia, Nadia was Viviana's main support during her pregnancy and the baby's first few months. Nadia was always a pillar of support for her and the whole family.

Nadia is my sister, we were partners in crime, we were everything. I am who I am because of her. Nadia is everything to me.

A few days later, Antonia and Viviana decided to adopt Nadia's three children. Since then, Viviana's workload and responsibility have been tremendous — she has to prioritize not only Jaciel, but her younger brothers, sisters, nieces, and nephews, too.

Between sequins and beacons of light

As in many Mexican homes, Viviana's alarm clock goes off at six. With her hair tied up in a ponytail that hides her beautiful waves, she heats up last night's dinner while Jaciel prepares his chocolate milk. At quarter to seven, they dash to school.

Back home, she does the housework and begins to sew, just as Antonia taught her, twenty years ago. The magic happens in a 3 x 1,80 mts. workspace. Her hands shape corsets for hundreds of dresses, she creates lines, combines colors and textures, giving life to beads, sequins, and gems. Delivering each corset or fabric has her running around the city with her little yellow tin, backpack over her shoulder, and her tote bag. The pay is just enough to survive. 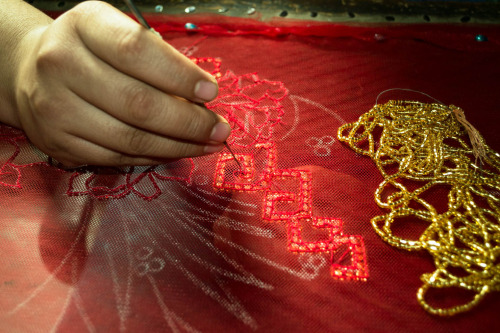 Vivi, as her friends call her, unhesitatingly describes herself in a single song: Let it Be. In her spare time, she enjoys painting ceramic figures like fairies and angels.

Viviana Muciño rarely smiles, but her joy is evident whenever she shares her experience as a mother and activist. At 32, she is the founding member of the Civil Association for Women of Influence, Mobility, Empowering, and Deconstructing Minds. In 2014, with various other groups, she helped coordinate a series of actions after the State of Mexico triggered its Gender Violence Alert, also visiting the 11 most-dangerous municipalities in the state.

In what she describes as “agony,” coupled with the realization that she's not the only one dealing with the country's patriarchal system, Viviana has organized street demonstrations to present demands to the government. Over the years, she has gotten to know the relatives of victims of femicide and missing women. She advises them, accompanies them, keeps an eye on them, with the belief that unity is the way forward. Viviana says “this could have saved Nadia,” and she firmly believes that that working together can save lives.

Viviana and her family are no strangers to the State of Mexico's troubled justice system. Nadia's case, she says, has been plagued by corrupt public officials who have both excluded and fabricated evidence. This experience, she says, made her familiar with the legal system and its flaws, leading her to feminist groups and organizations that help survivors of violence against women. This exposure convinced her to become a feminist activist herself, also working as a women's human rights advocate for the state.

In the last eleven years, it has become clear to us that we will not stop until justice is served for Nadia. We don't do this just for her. We don't want this to happen to even one more woman.

Viviana says that she expects justice in her sister's murder, despite the government inaction, so far.

Nadia's memory motivates us to continue and carry on. I know that, wherever she is, she is spurring us on to continue on this path, and we will continue to help women because of her.

The bond she shares to other women and the moral support she gets from Jaciel, whose name means angel of kindness and reconciliation, are what keep her going, Viviana says.

This little cherub has made me become more thoughtful, but more importantly, the experience of being his mother has been a privilege. He's made it so easy, it hasn't been difficult, going out with my child, seeing him happy. Being with him is what makes me happiest. Love from my son is the strongest love I have, as well as from my family.

Between sequins and beacons of light, Viviana says she won't stop until justice is served for Nadia. Travelling from one place to another, she thinks that one day women will be better off, living in a safer country.

This article was originally published by Yenn in Voces de Mujeres (Women's Voices) and is republished in Global Voices with the author's permission.